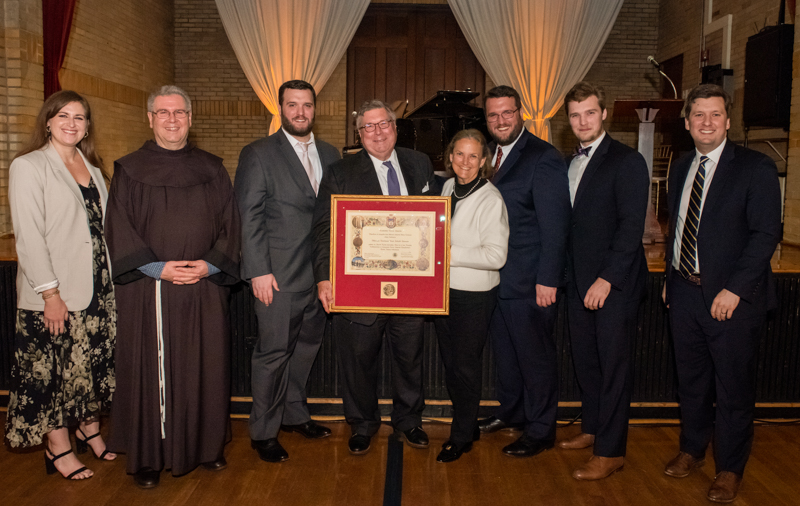 On Saturday 12 November, at the St. Francis Hall of the Washington Land Commissariat, in the presence of the Father Custos, Fr. Francesco Patton, 160 people gathered for the resumption, after a three-year interruption, of the annual Mass with benefactors and the ritual fundraising dinner.

“What a delight it is to be joined by so many friars, friends, colleagues and family members for this celebration tonight,” Paul Schott Stevens said. “It is good to see the tradition renewed tonight after the interruption of the pandemic.”

Stevens, a recently retired Washington, DC, attorney and long-time member of the Custody Board of Directors, spoke to a crowd of 160 people who had gathered on Saturday evening, November 12th, in St. Francis Hall, across the street from the monastery, for the resumption of the monastery’s annual mass with benefactors and fund-raising dinner.

During the dinner, Stevens was presented with the Grato Animo medal by Fr. Francesco Patton, OFM, Custos of the Holy Land. In Latin, Grato Animo means “with grateful soul,” Fr. Patton said, “and it is indeed with gratitude that I thank Paul for everything he has done for us Franciscans and all those we serve through our mission in the Holy Land.

“When the pandemic hit us,” the Custos said, “we suddenly found ourselves isolated. And for two years we were basically cut off from the rest of the world, without the presence and support of international pilgrims.”

Maintaining the holy places, keeping schools open and giving work to Christians in Bethlehem and other places became close to impossible.

“I am here above all,” he said, “to say thanks to you, dear benefactors, who have continued to give with joy, despite the difficult times you have also experienced,”

“We could not have done it,” he said, “without the support of you who are our first benefactors, who became in this difficult situation the hands of merciful God, the concrete face of divine Providence, the evidence of Christian solidarity.”

At a mass in the monastery church that preceded the benefit dinner, the Custos thanked the congregation “for the generosity with which you continue to support us and to sustain us in these three very hard years. I say in all sincerity,” he continued, “Without your help we would not have been able to survive the almost total lack of resources in which we found ourselves in these last years.”

Referring to Luke’s Gospel, he pointed out that “wars, earthquakes, pandemics, economic crises and persecutions belong to the normal course of events in the Church while she is present in this world.”

“This should not frighten us,” he continued, “but push us to trust always more in God and place all our trust in his Son Jesus.”

Stevens recalled that his own pilgrimage to the Holy Land several years ago was an experience that still moves him deeply. “It brought home to me the vivid realities of Jesus’ birth, life, death and resurrection, making the Gospel accounts of our salvation come more truly alive in my daily life.”

“And my pilgrimage made yet more clear to me how extraordinary the work of the Custody has been over the past 800 years and how vitally important it is today.”

Both he and Hugh Dempsey, D.Ed., GCMOb., the dinner’s emcee, urged attendees to put a pilgrimage to the Holy Land on their bucket list. “It’s life changing,” Dempsey said.

During the dinner, Friar Alessandro Brustenghi, OFM, internationally acclaimed as the “Voice from Assisi,” delighted everyone with renditions ranging from the crowd-pleasing “Volare” to the familiar “Make Me a Channel of Your Peace.” 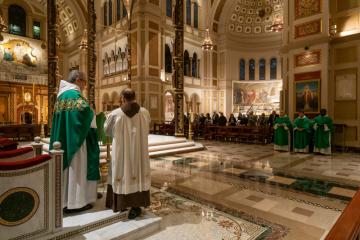 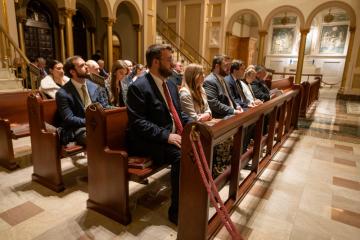 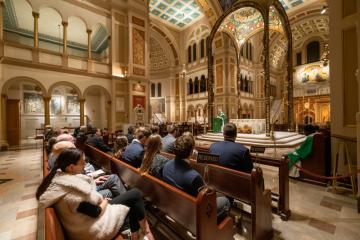 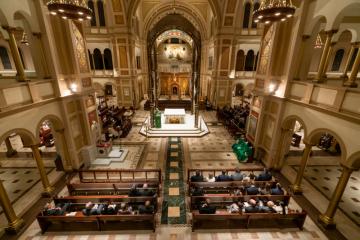 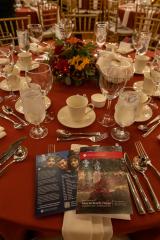 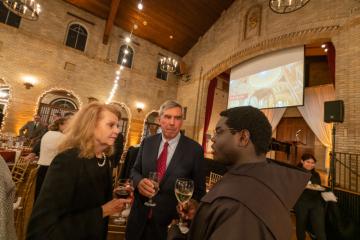 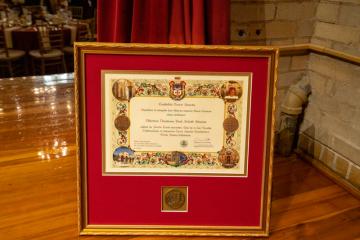 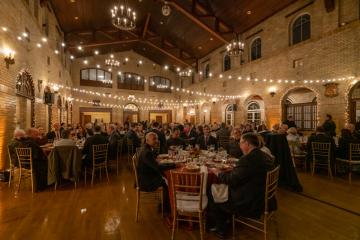 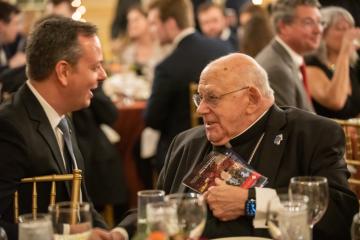 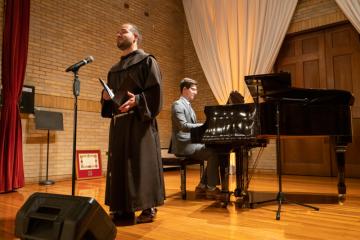 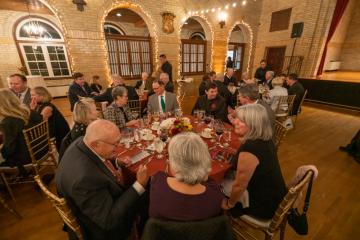 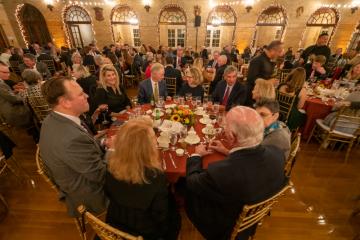 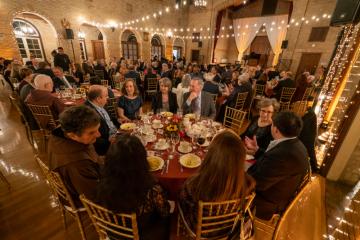 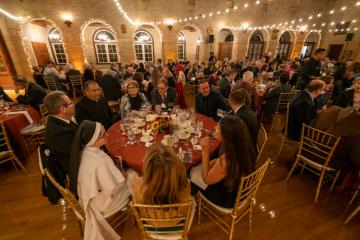 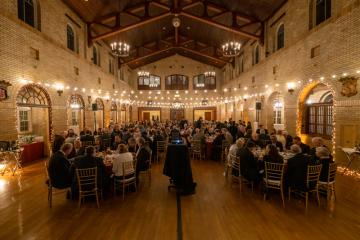 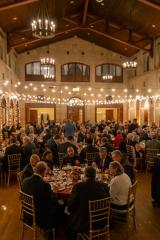 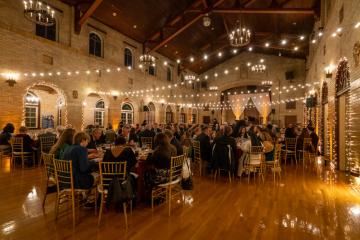 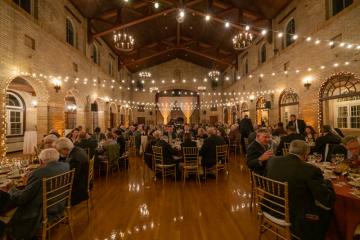 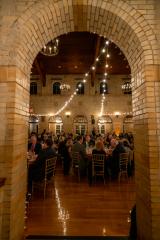 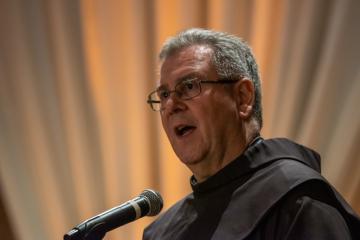 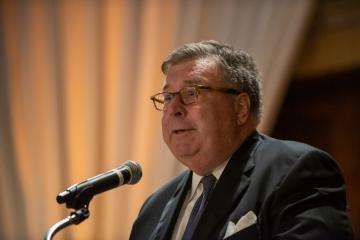 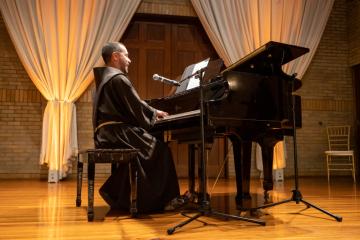 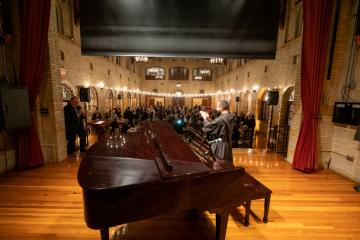 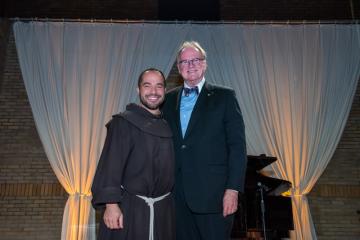 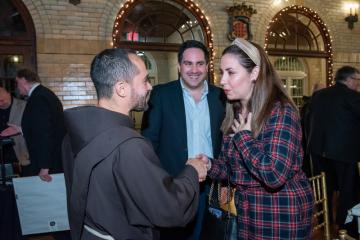 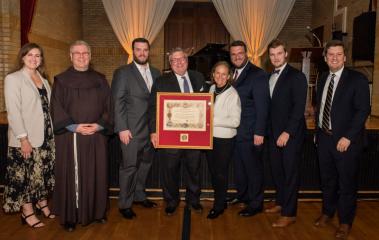