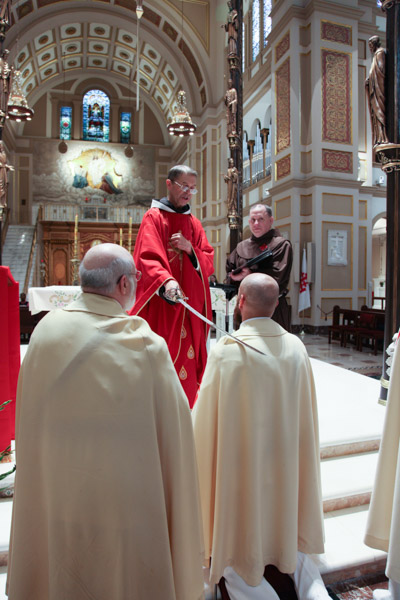 The Franciscan Fr. Larry Dunham, OFM, guardian, and commissary of the Franciscan Monastery of the Holy Land in Washington, D.C., invested a new member into its 103-year-old lay order, the Knights of Mount St. Sepulchre. Chris Yeazl, who grew up outside of Baltimore, Maryland, had recently completed a six-month “novitiate” program, a requirement for entrance into the order.

In over 100 years of continuous service, the mission of the Knights of Mount Saint Sepulchre has never wavered: “to guide the pilgrims through the Holy Shrines…assist in uniform at the solemn services and act as a guard of honor to the Blessed Sacrament whenever it is carried in procession.” (Crusader’s Almanac, October 1, 1916)

The order had its origins in the first part of the 20th century. As the number of pilgrims visiting the Franciscan Monastery grew, so did the need for volunteers to assist them. In 1915, a small group of Third Order Franciscans from New York organized a 250-person pilgrimage to the Monastery. This informal group called themselves the “Knights of Mount St. Sepulchre,” after the name of the Franciscan Monastery’s church. The next year, Franciscan Father Godfrey Schilling, founder of the Monastery, formally instituted the Knights of Mount St. Sepulchre as a fraternal organization to serve the Monastery.

Monastery visitors easily recognize the Knights in their distinctive white uniforms at Masses, when they serve as ushers and assist in liturgical processions. Knights also lead tours for nearly 4,000 visitors every year and help raise funds for charitable causes such as the Bethlehem Christmas Program.

The investiture ceremony for Chris Yeazel, which followed the homily of the Mass on June 8, featured an examination of the candidate as to his Catholic faith and commitment to serve the Monastery and the goals of the Knights. The rituals which followed were modeled by Fr. Godfrey on several ancient traditions followed for the reception of knights by the Custody of the Holy Land.

Fr. Larry presented the Cross of Knighthood (the five-fold Cross of the Holy Land), and a sword, symbolizing the new knight’s willingness to defend the Church. Chris was then invested with a white mantle. Fr. Larry then gently struck him three times across the shoulders with the sword, repeating the formula conferring knighthood. Chris then received the sign of peace from Fr. Larry and from the other Knights.
Fr. Larry noted in his introduction to the Mass that this was the first time the ceremony—usually held at the 10 a.m. Sunday Mass—was being held at the Saturday afternoon Mass. He added that investiture and knighting are “probably one of the most enjoyable and privileged things that I get to do, and it doesn't happen very often. We will pray for Chris during this mass and thank him as he prepares to join the Order of the Knights of Mount St. Sepulchre.”

After the ceremony, Chris told The Holy Land Review, that his interest in the monastery stemmed from a visit to the monastery’s farm, which enlists volunteers to produces thousands of pounds of vegetables annually for religious communities and the hungry in the D.C. area. “I had no idea the monastery was here.” He went into the church afterward and encountered two of the knights. “I met Louis and Claude that day and the rest is history.”
Chris is starting up an electric vehicle transportation business in Northern Virginia, as well as working on solar energy while pursuing his avocation to be a writer.As he took his vows as a Knight of Mt. St. Sepulchre, he renewed a long-standing wish to serve others. “I was in the Army for about five years and I miss that experience of service….I had memories of that when I took my vows and I welcome that.” He added, “Coming back here and being involved with the Knights and during my novitiate, it really brought me back to the faith and it's really been an incredible experience for me.”

Membership in the Knights of Mt. St. Sepulchre is open to practicing Catholic men, both single and married, age 21 years or over. Members benefit from belonging to a close-knit Catholic community. Spiritual benefits include an annual retreat, enrollment as perpetual members in the Holy Land Crusade and remembrance in the friars’ prayers and Mass intentions. Members complete a six-month novice period and commit to volunteering two Sundays each month (or equivalent hours) as well as on holy days of obligation. 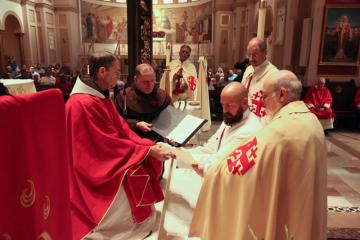 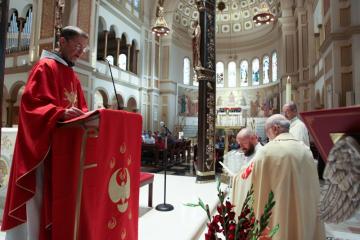 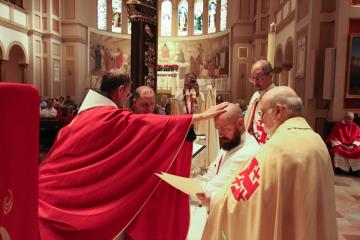 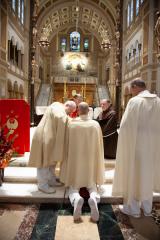 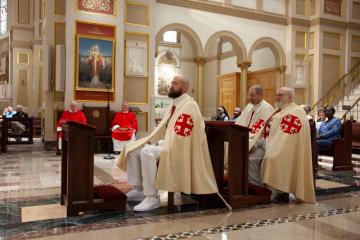 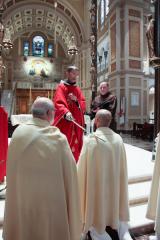 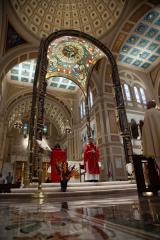