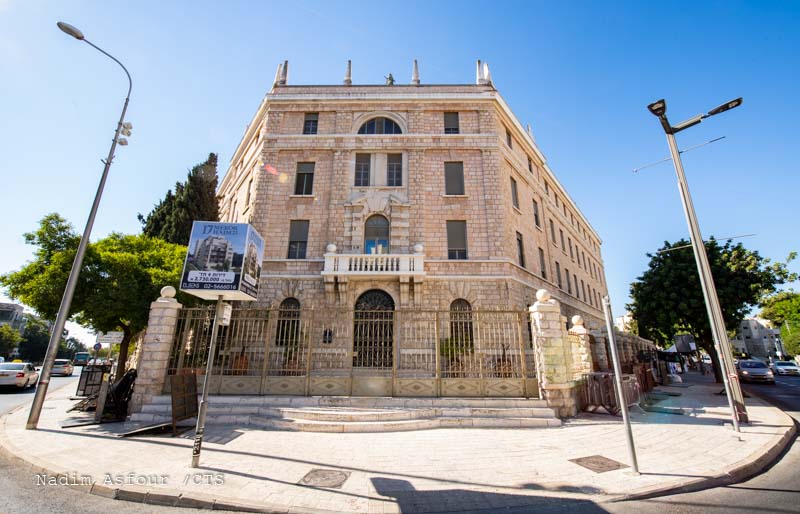 It is still shown on maps of Jerusalem as “Terra Sancta College”. The impressive building, which is on the corner of Paris Square, (כיכר פריז‎) has seen the history of the past hundred years go by in Jerusalem. It has even been at the centre of the news in the past few weeks, because it is close to the home of the Israeli Prime Minister Benjamin Netanyahu, which is just a few yards away, in the Rehavia neighbourhood. Protests and demonstrations, which have hit the headlines of local and international media, have taken place just outside its gates and in the nearby streets. Many people have wondered about the origin of this building with an architecture which is so different from the other buildings in West Jerusalem.

Today owned by the Custody of the Holy Land, the school was built in 1926 by the  Società San Paolo of Milan, an Italian religious congregation founded a few years earlier. It was designed by the famous Franciscan tertiary and architect Antonio Barluzzi, who decided to crown the building with a statue of the Virgin Mary, a replica of the one on the top of Milan Cathedral in Italy.

In 1917, Jerusalem came under a British mandate and therefore the English priest Father Walmsley was appointed as head of the school. Under the name of “Opera Cardinal Ferrari”, it operated for two years as a boys’ school. In the 1928-1929 school year, the school had 270 pupils enrolled, of whom only one hundred were Catholic; the following year, which was the last one, the number of pupils fell to 130, divided into eight classes between primary school and high school. The school had to close for lack of funds and it was then entrusted to the Franciscans of the Custody of the Holy Land, who appointed the American Father Pasuale Kinsel Headmaster.

During the 1930s, the school grew in importance and so did the number of pupils. In 1936-37 there were 360 pupils, with students of different religions: 85 Latin Christians, 171 Greek Orthodox Christians, Armenians, Syriacs, Copts and Protestants, 53 Muslims and 31 Jews.

In 1940-41 there were 475 pupils and the number increased until the school closed in 1947, when the area became a British security zone and access to it was forbidden. After the outbreak of the Arab-Israeli War in 1948, the Terra Sancta College, in the west part of Jerusalem, was separated from the Arab part and so it was impossible for students to reach the school. The educational activities came to an end and in 1949 the Hebrew University of Jerusalem took over part of the premises.

Many Israelis continue to remember it today as a seat of the university. Many remember the two large biology laboratories which stood in the courtyard and the many animals that filled another laboratory. Many groups of Israelis still ask to visit the lobby of the building, made famous by a scene in the famous novel “A Tale of Love and Darkness” by the Israeli writer Amos Oz. It is on the staircase in the lobby of the then university that the two main characters of the book meet.

At the end of the 1990s, the building returned to the hands of the Franciscans of the Custody of the Holy Land, who claimed its ownership.

Today some of the Franciscan friars who serve the Holy Land in various sectors live in the Terra Sancta College. The guardian of the confraternity is Fr. Alberto Pari, director of the Magnificat, the  Custody’s school of music, and who is also in charge of relations with the Jewish world. Religious and students of the Studium Biblicum Franciscum also live there, as well as a group of religious of the congregation of the Franciscan Sisters of the Immaculate who look after running the house.

The Terra Sancta College also houses the communications department of the Custody, which runs the official media of the Friars of the Holy Land, the editorial office of the French magazine Terre Sainte Magazine and of the Christian Media Center, the multimedia centre which produces news programmes on the Holy Land broadcast in various languages.

Italy’s Day of the Republic: The Custody pays tribute to Italy on its national holiday