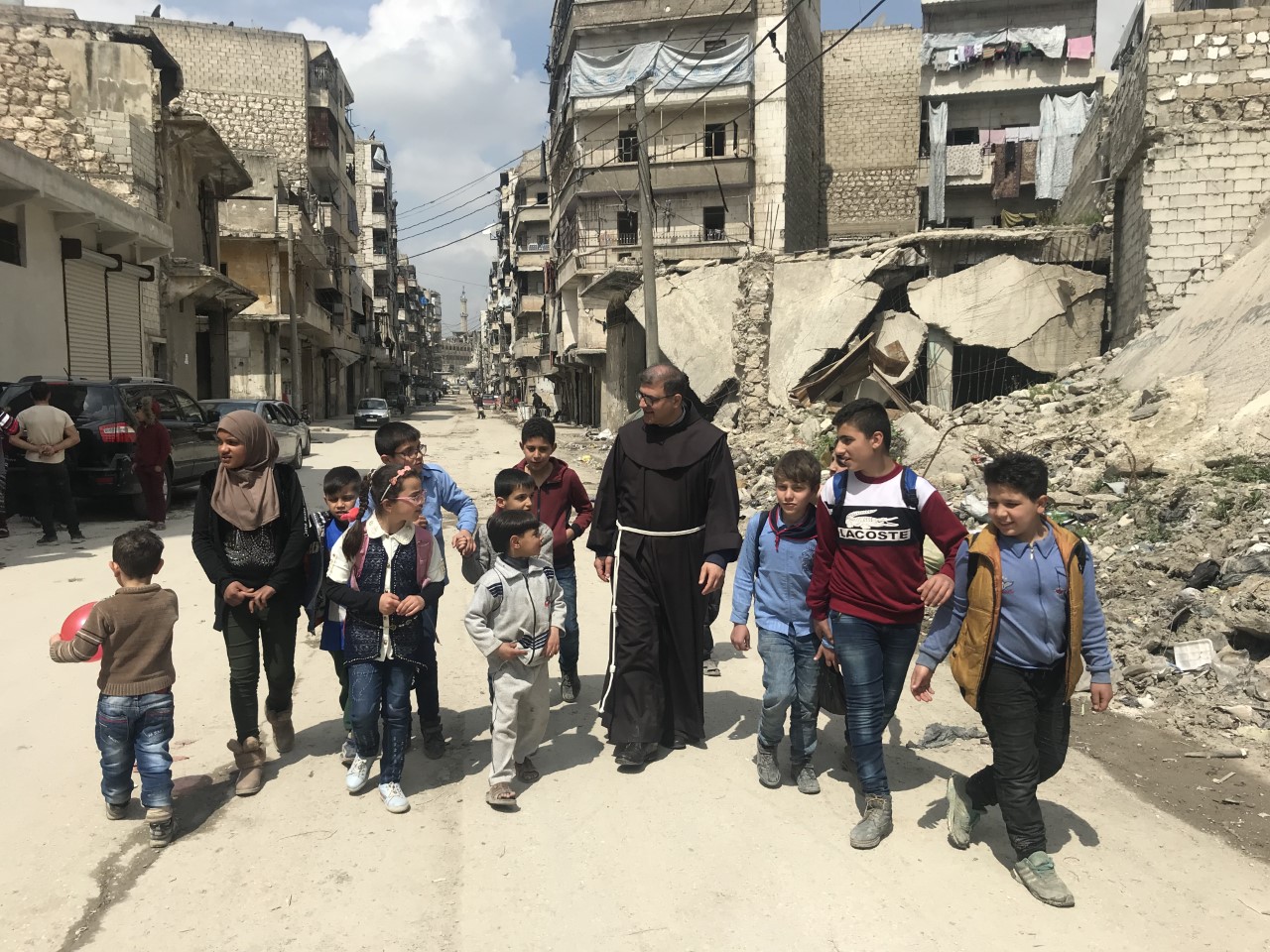 The Custody of the Holy Land, in the eight nations where it operates, also has some convents in Lebanon, Syria and Jordan. They are the fraternities of what is called the St Paul Region, established about ten years ago. “Considering the political and logistic difficulties that are encountered to go to the Holy Land from these three countries, the St Paul Region was conceived, to increase the pastoral and vocational activity, to make an extra effort for ongoing formation and also for a better economic management,” explained Fr. Firas Lutfi, Minister of the St Paul Region.

“The Minister and the council (made up of the regional vicar, three councillors and a secretary) can also use discernment on the projects that concern the Region, always in harmony with the Custody of the Holy Land,” continues Fr. Firas. After several years in Syria, today the Franciscan lives in the convent in Beirut, in Lebanon, from where he carries out his task as the animator of the Region’s fraternity.

Thirty friars offer their service in Lebanon, Syria and Jordan, distributed in fifteen convents. In addition to the centre welcoming aspiring friars of Custody in Harissa, in Lebanon, the St Paul Region also includes the Terra Sancta School in Amman, Jordan, and the parishes (nine in Syria and one in Lebanon). There are also the friars who look after the three shrines: the Memorial of Moses on Mount Nebo in Jordan (from where Moses saw the Promised Land before dying), the Memorial of St Paul in Damascus (the place of the Saint’s conversion) and the chapel of St Ananias (the Christian martyr who allowed St Paul to recover his eyesight and who baptized him).

An important occasion to bring together the friars of the St Paul Region was the Chapter which is held every three years and which this year took place from 13th to 16th January in Amman. Fr. Firas explains that due to the war in Syria and the economic crisis in Lebanon, it was difficult even only trying the travel and for the parish priests it was not easy for them to leave their pastoral activities. This time though, there was a high participation in the Chapter: twenty-one friars out of thirty, as well as the Father Custos Francesco Patton, the  Custodial Vicar Father Dobromir Jasztal, some Custodial Definitors (Father Marcelo Cichinelli, Father Ibrahim Faltas, Father John Luke Gregory, Father Bruno Varriano) and the Custodial Bursar Father Ramzi Sidawi. “Every time we meet, we feel the joy of the fraternity, because we strongly believe that we are called to this to the very core of our being,” continued Fr. Firas. “The Chapter is also a time of verification of the many projects that we have launched during the Syrian conflict and an occasion to listen to the friars’ experiences.”

The head of the Terra Sancta School of Amman, Fr. Rachid Mistrih, spoke of the important educational and pedagogical function of the school. Concerning Syria, they tried to understand how the friars can be close to the people who suffer, what to do for the problem of immigration and how to help in the psychological difficulties of the many severely wounded children. “In Syria we also have two parishes on the border with Turkey, in Knayeh and Jacoubieh, and we heard all the many sacrifices of our friars to live in that area controlled by the jihadists,” said the Minister of the St Paul Region. “Fr. Hanna and Fr. Luai, who operate there, are giving the example of gratuitous love and an embrace that is open to all.” The friars do not only look after the small Christian community that has stayed (made up of three hundred families of Catholics, Armenians and Orthodox) but also the Muslims, many of whom are refugees due to the continuous violence in the rest of the country.

“For Syria, the Corona virus is the straw that has broken the camel’s back,” said Fr. Firas. “This is an emergency that is added to the many that the Syrians have to face every day. In Aleppo where I was for many years, they are still suffering from the consequences of the war and now that they had just begun to breathe, fear and worry are back.” 15th March 2020 marked the tenth year of war, but a part of Syria is still a turbulent area: the area of Idlib and at the border with Turkey. The challenge now is how to help the people stay at home, to prevent the virus spreading, but trying to guarantee minimum and essential aid, so that people who often work on a day to day basis do not die of hunger.

Jordan has also paid the consequences of the war in Syria. Hundreds of thousands of Syrian refugees live in the country and now the economy is being put to the test by the closure of the services and the measures to fight the Corona virus, as already decided in many other countries.

In Lebanon, people are not allowed out of their homes, apart from essential activities, plus there is a curfew at night. The country now has to face the consequences of the economic crisis. “After months of protests in the streets, blocked roads, closed universities, it now has to reckon with poverty and a blocked economy,” Fr. Firas explains from Beirut.

This Holy Week will be different for the St Paul Region as well. The parishes, closed to prevent the spread of the Corona virus and in the respect of the measures laid down by the authorities, will try to transmit the celebrations in streaming. “All the parish priests have undertaken to open a page where they can transmit the Masses and people can have spiritual communion,” concluded Fr. Firas. “I hope that we will be able to emerge from this experience enriched, rediscovering ourselves and others, and rediscovering that God is the Father. He was not the one who wanted this pandemic, he is suffering with us and covers us with his infinite love.” 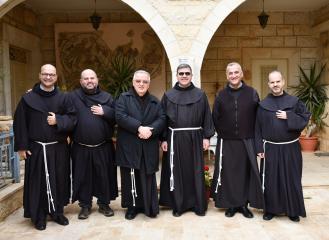 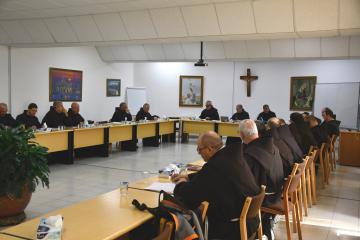 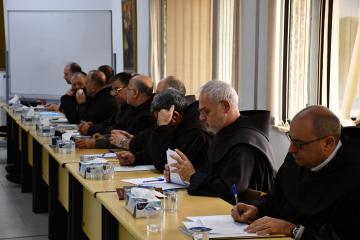 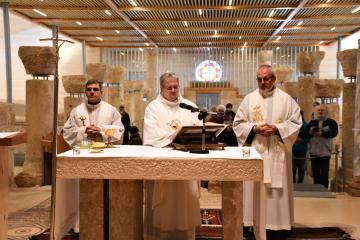 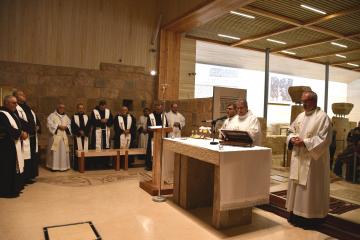 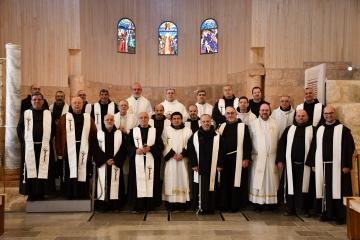 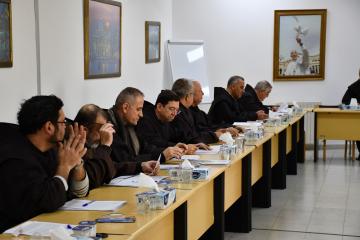 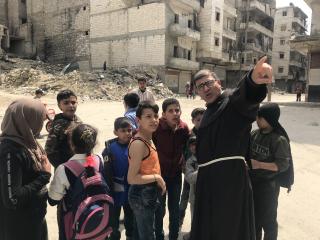 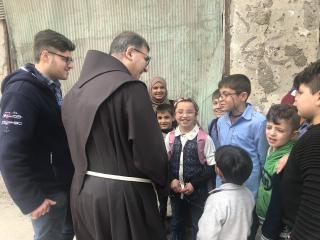 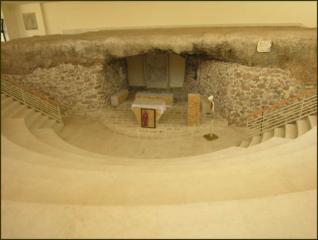 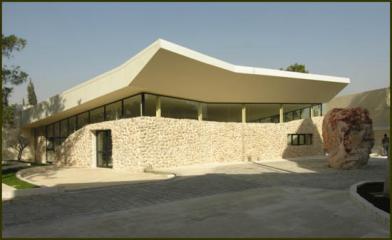 The Latin parish of Jericho: an example of brotherhood