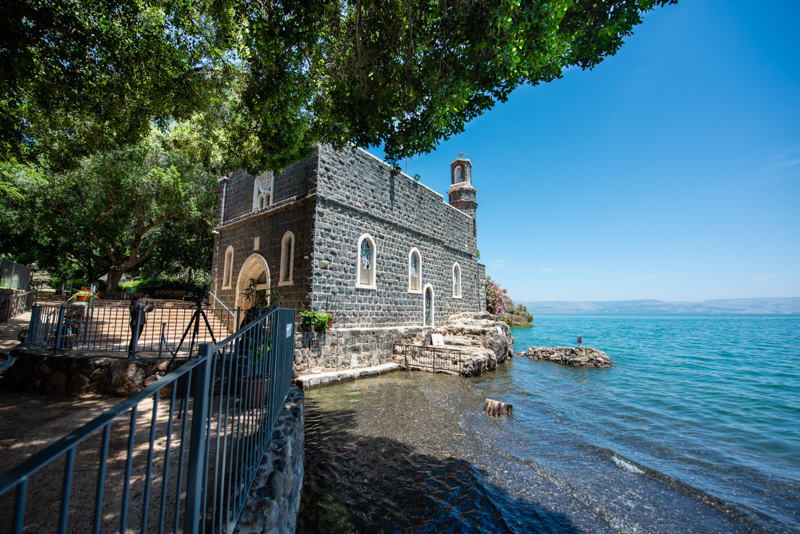 There are numerous names for this large freshwater basin, which is about 21 km long, 12 km wide and 200 meters below sea level. But in all languages and all over the world it is known as the Lake of Jesus. Countless are the biblical quotations of the events that took place on its shores.

For the Jewish people, explained Br. Massimo Luca, professor of the Studium Biblicum Franciscanum in Jerusalem, it is "Yam Kinneret": Yam means "lake" or "sea", because in the Hebrew language the term is the same, while Kinneret means "harp", which is similar in form. The lake is also referred to as "Lake or Sea - of Galilee" from the name of the region it borders with; while in John's Gospel it is called "Lake of Tiberias" from the name of the city, which already existed. Finally, it is also known as "Lake of Gennezareth", a Greek name derived from Ginnosar, which in Hebrew means the adjacent plain.

Br MASSIMO LUCA, ofm
Studium Biblicum Franciscanum
"The Gospels tell us that, when Jesus left Nazareth, He came to live in Capernaum, to the point that in the Gospels it acquired the title of "the city of Jesus". Here, next to Capernaum, in the hinterland, there was an important road of communication, the "via maris": a road popular with travellers in general. Moreover, Capernaum had another peculiarity: it was a border town. This way, Jesus' message could be spread much more widely because the travellers reported the presence of an extraordinary man who worked in Capernaum."

BR MASSIMO LUCA, ofm
Studium Biblicum Franciscanum
"Two years ago or so, we came close to the flooding of the lake, which means that the level was lower than what Jewish scientists or experts called "minimum" water level to safeguard the ecosystem., We were below 312 meters below sea level. But in the last 2 years, thanks to the rainfall of the last 2 winters, in which the rain was heavy, the lake has returned to these levels. The last time it reached these levels it was winter 2002 / 2003. 17 years ago."

Important reservoir, in the last 70 years the lake has undergone continuous fluctuations. In the 80s and 90s, the lowering of hydrometric levels was due to the increased demand for freshwater due to population growth, climate change as well as agricultural and industrial development.

And today there is the news that the level of the lake has risen to 13 cm below the "upper red line" of 208.80 metres below sea level. Once this threshold is exceeded, there is a risk of flooding.

BR TYMOTEUSZ MARSZALEK, ofm
Guardian Convent of the Primacy of St. Peter
"We are in front of the Lake of Galilee, very suggestive for Jesus, for the first Christians but also for all those pilgrims who come here every year. It is the only place, in fact, where pilgrims can touch the waters of the Lake of Galilee and experience a very strong moment."

BR TYMOTEUSZ MARSZALEK, ofm
Guardian Convent of the Primacy of St. Peter
"In September, people had to walk a lot to touch the water."

BR TYMOTEUSZ MARSZALEK, ofm
Guardian Convent of the Primacy of St. Peter
"The only thing left is, as the pilgrim Egeria used to say, on the right side of the church, the stairs that were covered with water in her time."

Same hydrometric levels that Pope Paul VI, the first Pope to visit the Holy Land, could see in 1964. From the steps of the Church of the Primacy, the Successor of Peter was able to touch the water. And the photographers captured the extraordinary event.

“Ramadan Karim”: signs of hope in a Jerusalem still with wounds