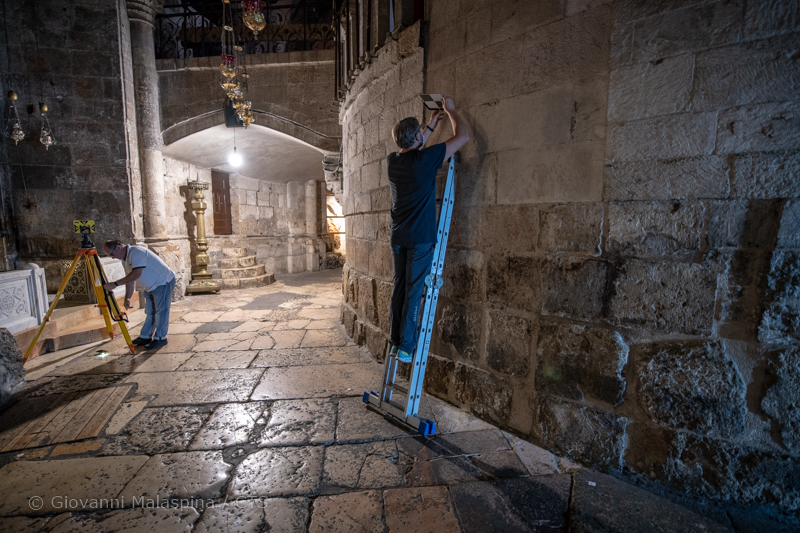 Collecting data in the Basilica of the Holy Sepulchre, September 2021

Despite the difficulties due to the Covid-19 pandemic, the restoration in the Holy Sepulchre continues, the result of the historic agreement between the three Christian communities (Greek Orthodox, Catholic and Armenian) which look after the “church of the resurrection.”On Monday 27 September, the Technical-Scientific Committee appointed to do the work, presented the state of progress of the feasibility tests and the estimated times of completion to the heads of the three Churches at St Saviour’s Convent in Jerusalem. Having come from Italy for the first time since March 2020, after the long absence imposed by the health restrictions, the experts work in different institutions: “La Venaria Reale” Centre for Conservation and restoration of the Cultural Heritage Foundation of Turin (CCR), the Department of Studies of the Antiquity of “La Sapienza” University of Rome and the Politecnico of Milan.

After the first phase of restoration, concluded in 2017 - in which the Holy Edicule which contains the empty tomb of Christ, was restored to its original splendour – in December 2019 the new inter-disciplinary scientific-technical committee had announced a second phase of restoration in Jerusalem,  concerning the floor of the basilica. Just over two months later, however, the Covid-19 pandemic arrived to upset all the plans, with the closing of frontiers and lockdowns all over the world, which prevented the experts from travelling. Nevertheless, the group made every effort to continue their preliminary studies on the restoration,including remotely.

“We have worked in these two years of the pandemic, despite the difficulties,” saidStefano Trucco, director of the work and supervisory architect. “We wanted to come back to Jerusalem to show that this project is very important to us and we want to thank the Christian communities who have put their trust in us. In our remote work, we had great help from the three architects who here in Jerusalem represent the three Christian communities of the Holy Sepulchre. In the basilica a fine climate of reciprocal help was created between us and the members of the community who live there.”

“At the moment we are in the phase of the feasibility study,” explained the deputy director of the work,Michela Cardinali. Architects, engineers, scholars and researchers have worked on different fronts in an inter-disciplinary way to answer the questions from the communities: the stability of the Edicule, the implementation of the systems, the topic of the restoration of the entire floor, considering that there is an interest in carrying out excavations and archaeological studies all over the surface. This last complex topic was studied in depth through diagnostic studies and studies of the existing documentation, and then we started to propose solutions to the communities, which have to be approved and studied in greater depth in the final project.”

Prof Francesca Romana Stasolla, at the head of the work group of archaeological researchconnected with the restoration work, explained how they have decided to proceed: “Before starting any form of archaeological activity in the church, we deemed it necessary to collect all the information – published and unpublished – that could be useful for reconstructing the events in the church itself, in order to make every discovery during the excavations significant. We decided to set up a database to add elements from written sources, archaeological sources, bibliographical, photographic and cartographic sources.”

The preliminary studies, which the work group is carrying on, aim at not being invasive and above all at not hindering the daily activities in the Holy Sepulchre, such as the celebrations of the three Christian communities, the free movement of the friars who live there and access to pilgrims. To do so, the basilica has been ideally divided into ten areas and then there will be three sites. To understand the conditions with which the floor could be impacted, in the meantime a monitoring system of the current climate condition in the basilica of the Holy Sepulchre has been installed.

According to what the scientific committee has communicated, the restoration is estimated to be completed in 26 months, even though new solutions will be studied in the meantime which could reduce the time necessary for the work.

In this phase, particular attention will be given to the study of the materials, as the coordinator of the project, Paola Croveri, said: “We want to keep as much as possible of the existing materials in the basilica. These stones have seen millions of pilgrims; they are a testimony of the past and of these two thousand years. However, we also want to give unity to these stones, making them more accessible. At the moment, our colleagues at the  Politecnico of Milan are documenting very precisely every centimetre of the surface of the floor and next month we will try to understand what there is under the floor and some aspects of the archaeological structure. We expect to plan paths to keep access for the functions that are held in the basilica.”

The joy of the Christian communities of the Holy Sepulchre

“This second phase is fundamental because it marks a further passage towards the completion of the restoration of the Holy Sepulchre which tomorrow will allow, both the pilgrims and ourselves, who celebrate in the Holy Sepulchre, to enter a place that has the aesthetic dignity it deserves.” This was the comment of the Custos of the Holy Land, Fr. Francesco Patton. “It is the most important church in the world and it has an extraordinary symbolic value, as it is the only church in the whole world where Greek Orthodox, Armenians and we celebrate,” he added. “Today’s step marks the continuation of cooperation between our three communities, which is not only material, but is a sign of ecumenism, an extraordinary sign for the whole of the Church.”

“Today we are pleased: we had started the restoration in the past and we were a little concerned because we wanted to continue,” said theGreek Orthodox Patriarch Theophilus III. “It was not possible to have started restoring the tomb of Christ without completing it correctly. We also have our experts from the University of Athens and we are ready to offer our experience and I know that they have already been cooperating with La Sapienza University of Rome for some time now in different areas. It is good news that we will be continuing the restoration of the Holy Sepulchre and I believe that this is an important contribution by the Christian Churches, to preserve and maintain the special cultural, religious and political status of the Holy City of Jerusalem.”

In this second phase, the members of the Christian communities of the Holy Sepulchre, having already collaborated in the past for the restoration, know what to expect, as Father Samuel Aghoian, the Armenian superior of the church of the Holy Sepulchre said, who was present at the presentation representing the Armenian Orthodox Patriarch.“The tomb of Christ is important for the whole world,” Father Aghoian said, “it is a historic place, a religious place, a marvellous place.It is a place that attracts for various reasons, there is a sort of mystery that I cannot explain, it has a power. We are delighted that we can look after this Holy Place and present it to the world in the best way possible. For centuries no restoration work was done or it was done partially, without involving the three Churches together. I am very pleased that we will be working together, including with the Greek Orthodox Patriarch, and we will do our best to help and assist during this work.” 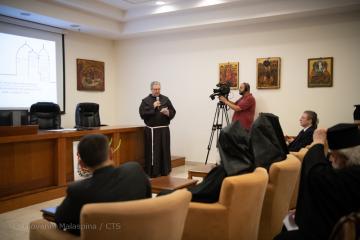 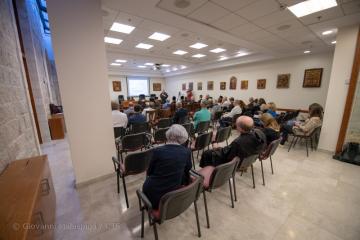 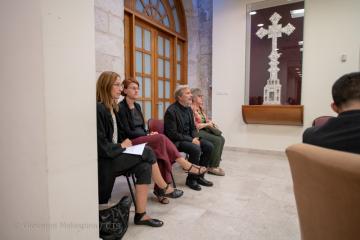 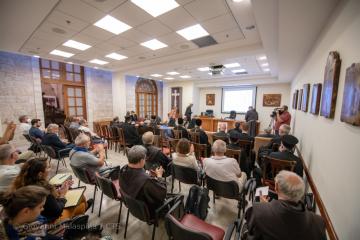 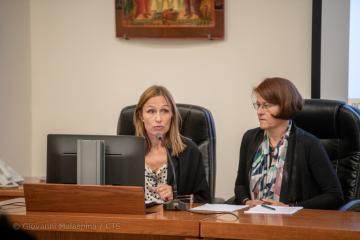 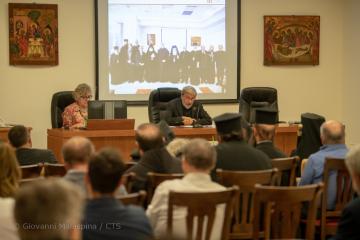 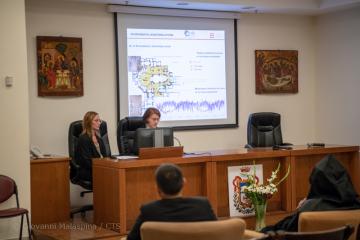 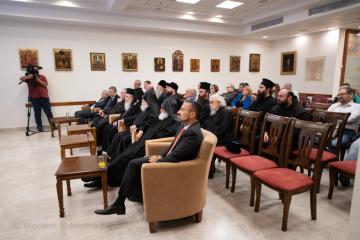 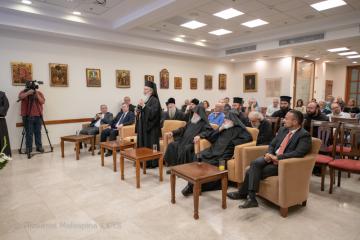 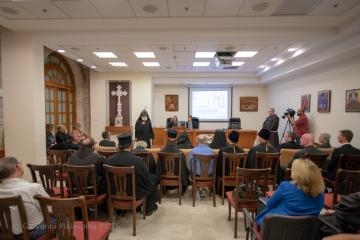 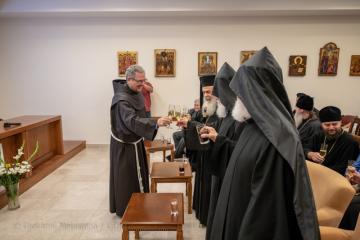 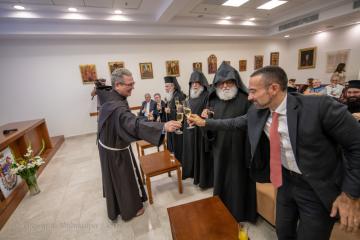 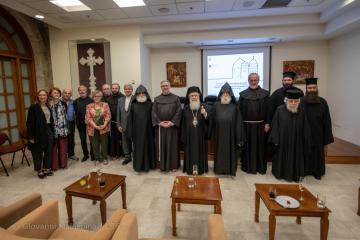 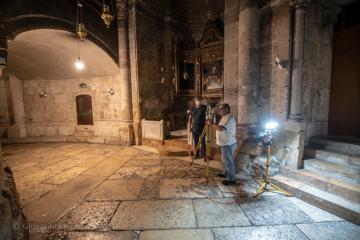 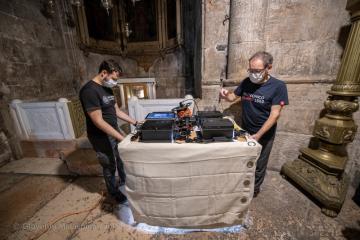 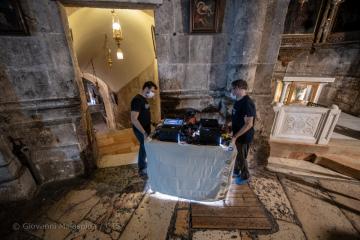 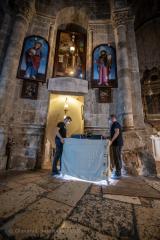 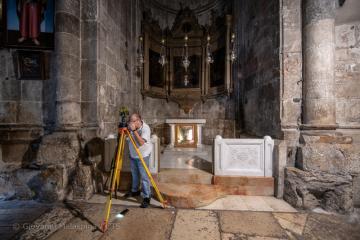 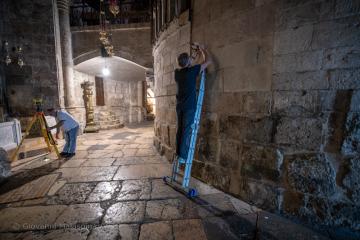 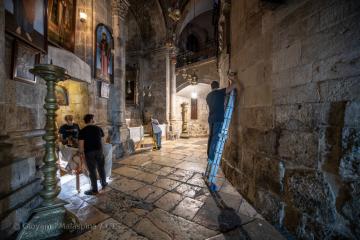 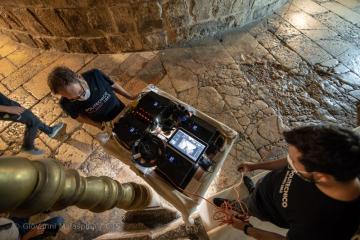 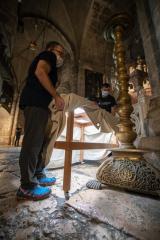 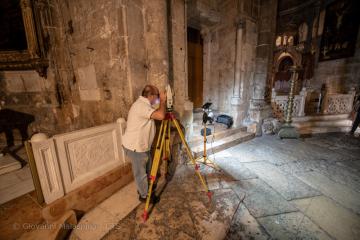 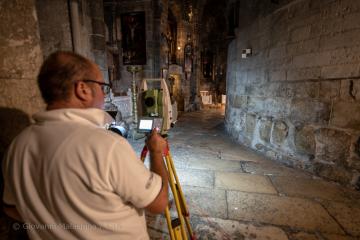 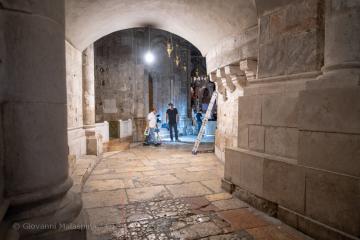 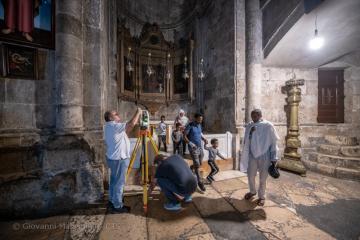 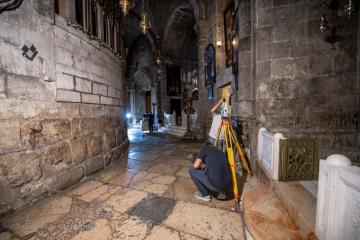 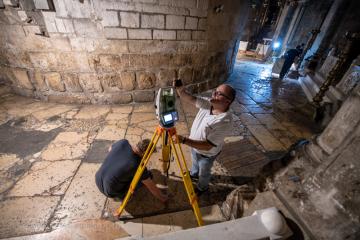