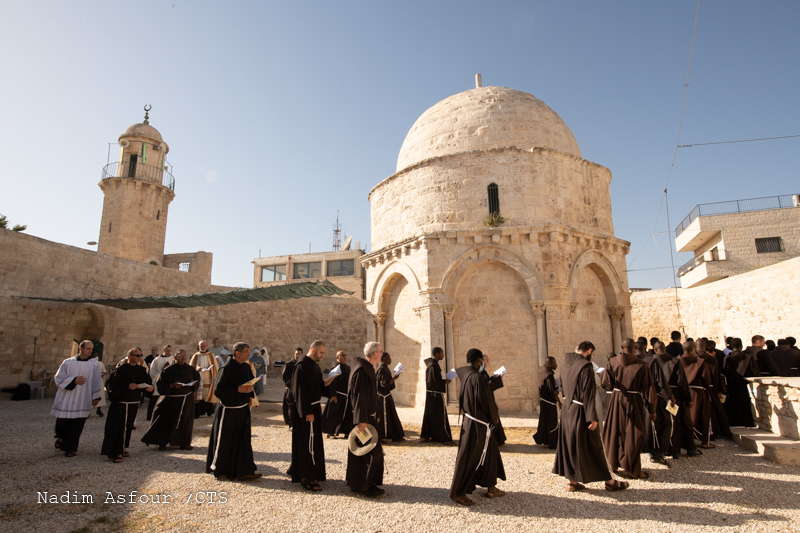 “In the place of the Ascension, where Jesus gave his disciples the mission to be witnesses of the Good News, we want to invoke peace, peace for the whole world and peace for Jerusalem, especially at the moment.” The Vicar of the Custody of the Holy Land, Fr. Dobromir Jasztal, wanted to start with these words the celebration of the mass of the Ascension, which was held on Thursday 13 May, in the  chapel on the Mount of Olives in Jerusalem. “We also want to invoke the gift of the Holy Spirit so that it may illuminate the heart of governors, illuminate the minds of everyone, because with dialogue and mutual respect, probems can be solved,” the Vicar added.

The celebrations in Jerusalem had already started on the afternoon of 12 May with the solemn entrance into the chapel of the Ascension by Fr. Dobromir Jasztal,  then followed by the prayer of the First Vespers. The Franciscan friars in procession then sang the litanies of the saints, going around the Crusader edicule of the Ascension three times. Because of the current tension, this year, on the day of the vigil, the traditional prayer of the Compline in the chapel and the nocturnal prayer of the Office were not held, but the Basilica of the Holy Sepulchre in Jerusalem stayed open, for a special nocturnal prayer on the occasion of the feast-day.

The morning mass of the Custody, however, took place as usual, followed by the one celebrated by the Latin parish of Jerusalem in Arabic.

“Dear brothers, united here together on the Mount of Olives in the place which witnessed the episode we are celebrating, we would like to understand even more the mystery of the Ascension,”  said the Custody’s Vicar in his homily. “We would like to feel the presence of the Lord who accompanies our life and our mission and at the same time strengthen the faith that where he ascended, so will we [...]. There is only one path, one condition:  being disciples of Jesus like those who put into practice the word  which was sown in us and not only as listeners who delude themselves”. United with Jesus, it will then be everyone’s task to answer the call of God to bear witness to it in the world. “As then, today as well, the world, this country and Jerusalem itself need to be released from the demon of envy, of evil, of hatred. It will perhaps be difficult to learn many languages to communicate with many, but it will be simple to speak a new language that everyone understands: that of the charity and brotherly love that Jesus taught,”  concluded Fr. Dobromir.

The first Christians remembered the Ascension by gathering in a cave that is at the summit of the Mount of Olives, where in about 390, after Constantine’s edict, a first church was built by Poimenia, a devout Roman woman. According to Eusebius, the same church would date back to 333 and was built by Constantine on the wishes of his mother Helen. After having been destroyed twice, it was rebuilt by the Crusaders. Before being knocked down by the Muslims who left only the octagonal edicule standing and which is still present. Since 1198, when it was bought by the emissaries of Saladin, the place has remained the property of the Islamic waqf of Jerusalem and has been transformed into a mosque but which is not used for worship. According to tradition, the print of Jesus’ right foot is on the rock preserved in the edicule. 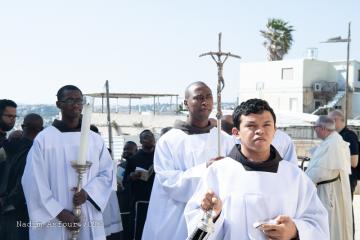 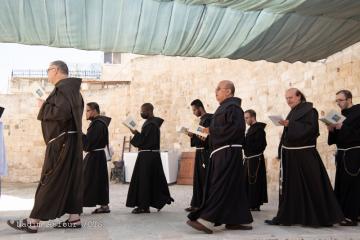 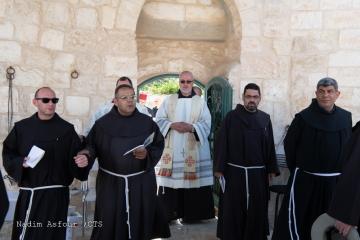 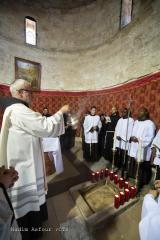 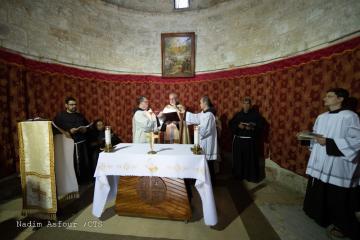 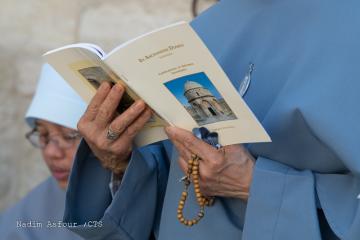 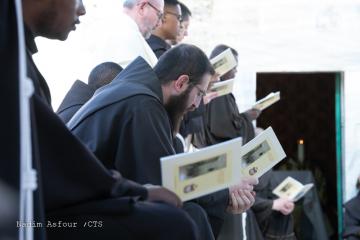 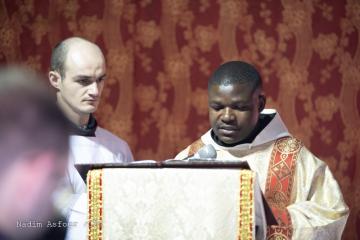 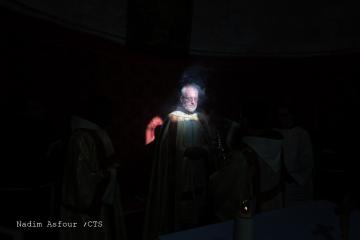 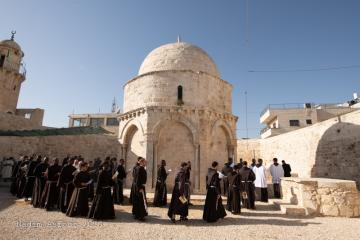 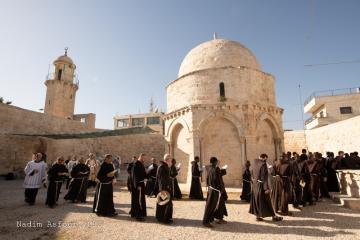 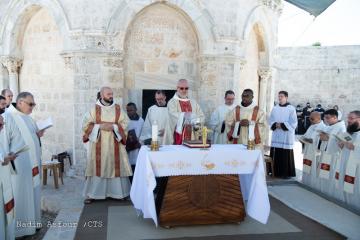 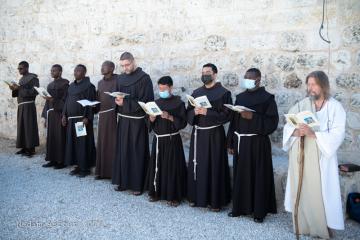 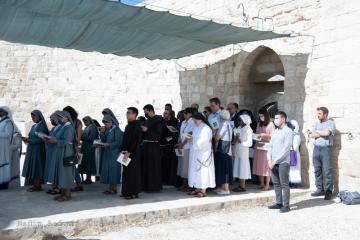 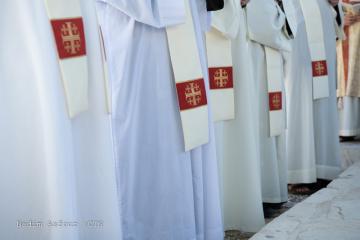 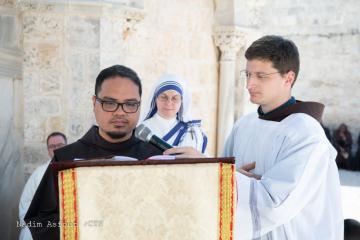 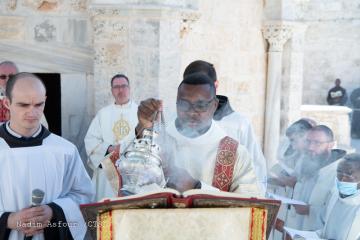 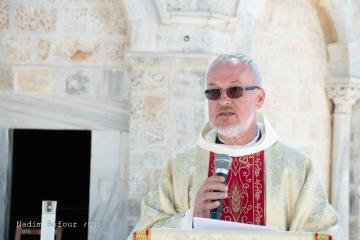 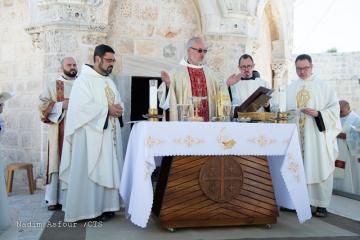 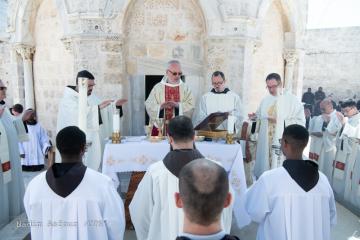 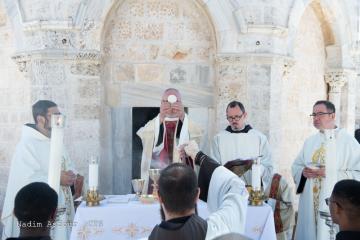 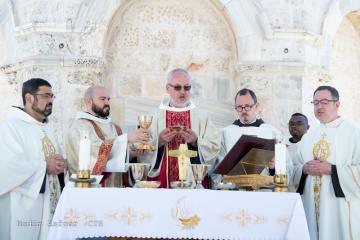 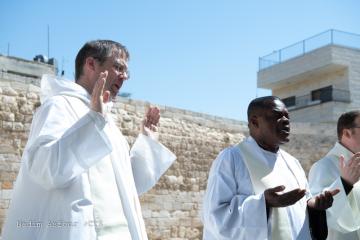 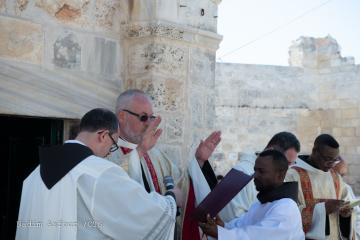