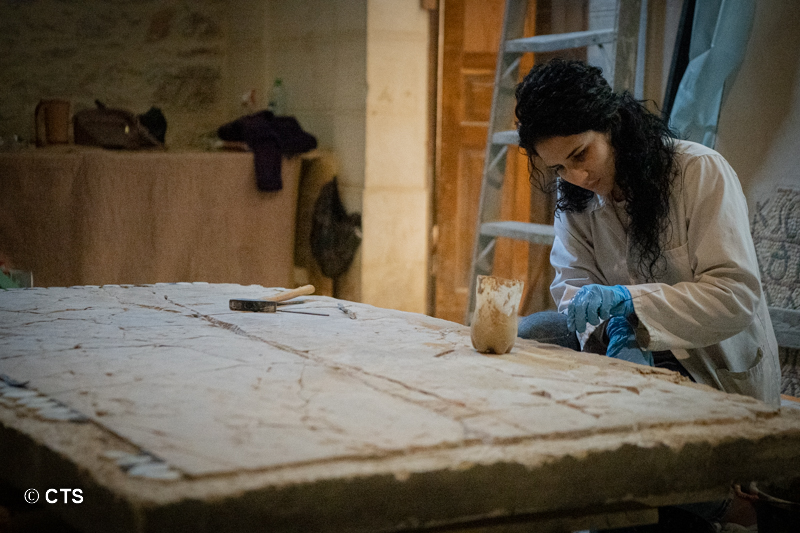 After the destruction of the Constantinian buildings ordered by the caliph al-Hakim (1009),restoration was undertaken at the Holy Sepulchre in Jerusalem of the parts that were still standing by the emperor Constantine Monomachos. This restoration was completed in 1048. After this massive work of renovation, the Anastasis –i.e. the circular area which surrounds the empty tomb of Christ– remained essentially what it had been before, with its peripheral walls and with almost all the colonnade. Until today, a circular gallery has been preserved at a raised level of this colonnade, which was totally accessible with the exception of a point where there is a wall which interrupts the property of the Armenians and of the Latins. In the latter part, called the "Gallery of the Latins," excavations were made in 1969 as part of the restoration of the Basilica of the Holy Sepulchre in Jerusalem (1960-1974), by the Franciscan, fr. Virgilio C. Corbo, ofm.

The stone slabs of the existing floor were removed on that occasion, and the floor from before the fire which severely damaged the basilica in 1808 was found; under this, another floor patched up with cut-offs of marble was found, which from the subsequent excavation was the repair of the 11th century mosaic floor (of the pre-Cosmatesque type).  During the restoration of the Gallery of the Latins, a new stone floor was laid and is still present, and the most important pieces of the 11th century floor were preserved, hung on the walls.

Some of these fragments, sections of a single mosaic floor, have been taken over the past few days to the Terra Sancta Museum of Jerusalem, for cleaning and consolidation.
The different parts selected show different decorations: some figurative and others geometrical, in this way going against the homogeneity of the mosaic design usual in churches of the Byzantine period. This, together with the use of salvaged slabs, allows supposing that it was reused material. The geometrical motifs with a circular rhythm embellish the floor of the gallery’s corridor, which ended in correspondence with two semi-rectangular rooms, decorated more richly with figurative motifs. The pieces that make up these floor sections are in stone and glass paste.

At the time of the restoration by Father Corbo, the mosaics in question were put on slabs of concrete, as was usual in that period. Although today this operation is done with lighter materials, the transposition on to concrete can be said to have in some way preserved them. The task of the staff of the Terra Sancta Museum is to clean and consolidate these floor segments, in order to lengthen the life of each fragment.

At the end of the restoration, these slabs will remain on permanent display in the Terra Sancta Museum, in the convent of the Flagellation, in the Old City of Jerusalem. 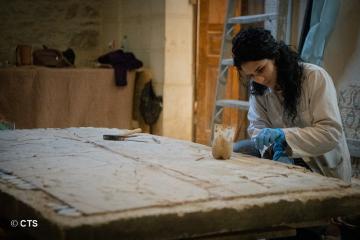 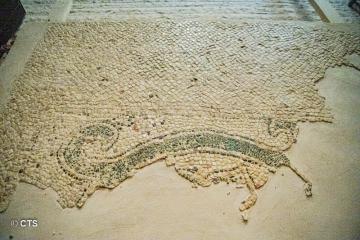 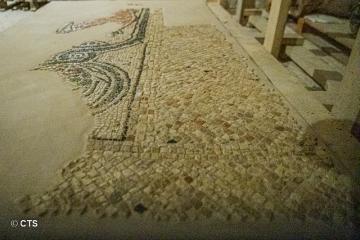 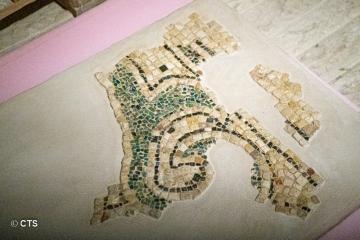