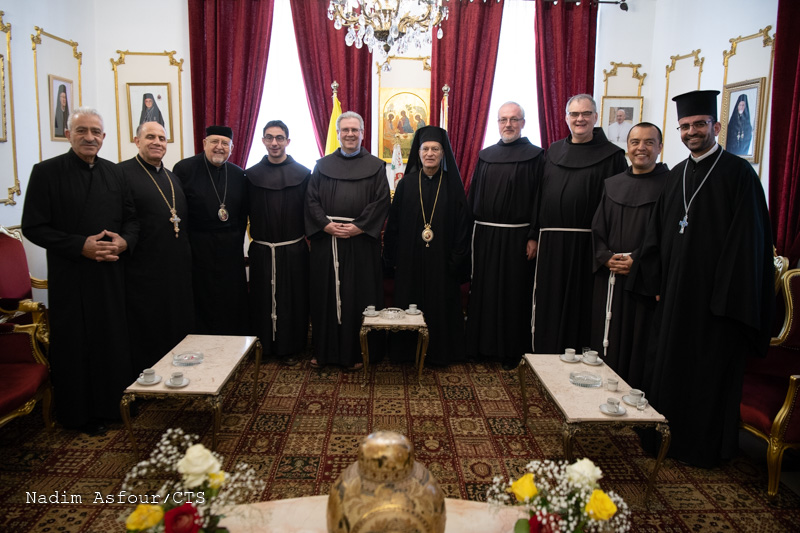 After a year of interruption due to the pandemic, the different confessions of Christian faith came one after the other to the Custody of the Holy Land on Thursday 8 April for the Easter greetings. In line with tradition, the delegations were met by the Custos of the Holy Land, Fr. Francesco Patton, the Custodial Vicar Fr. Dobromir Jasztal and a delegation of Franciscan friars who live at the convent of St Saviour.

Greetings were exchanged with a succession of the various delegations, from the Greek Orthodox to the Latin Patriarchate of Jerusalem, without forgetting the delegation of the Ethiopian, Coptic and Syriac Churches. The delegates of the Armenian Church  were absent, but they were officially present for the Easter celebrations using traditional means of communication.

The first to arrive in the morning was the Greek Orthodox delegation, led by the Orthodox Patriarch His Beatitude Theophilos III. In his speech, His Beatitude wanted to emphasize the closeness, in this particular period, to all the people who have suffered at various levels because of the pandemic. "Today, here, we are celebrating with joy the possibility of seeing a light at the end of the tunnel, the possibility of looking at the world as though the pandemic were a problem of the past,” Theophilos III said. "Even though our two celebrations did not coincide this year, for Jerusalem it is important to celebrate Easter because this place must be the perennial witness of the resurrection. We live in the Holy Land and with the Holy Sepulchre, which embraces all the communities, we show the need to bring the light of the resurrection."

The Custos of the Holy Land then spoke to welcome the Greek Orthodox delegation. "Returning to the light slowly,” he said, "reminds us as well of a sort of resurrection. Like the vaccination, we ought to welcome the vaccination of the resurrection. It is the only defence against the lack of meaning and the evil of the world.” Lastly, the Custos mentioned the closeness and the support of the Greek Orthodox for the events that took place recently at Gethsemane just before Christmas last year.

The representatives of the Ethiopian Church then took the floor, to wish the Latins a Happy Easter, also recalling how we must thank God deeply for this calmer time in which we are allowed to celebrate Easter.

Fr. Patton, on this occasion, recalled the message that Pope Francis sent to the world, saying that we have all been healed by Christ and all our sufferings must be transfigured in the light of God.

The third delegation was that of the Copts and of the Syriacs, who brought their greetings together. The Coptic delegation started by conveying the greetings of the Coptic Bishop Anba Antonius. "We are delighted to celebrate this feast-day and have a reason to rejoice,” said the Coptic representative. "In this time of the pandemic, we have to give a message of joy, without speaking of sadness and illness, but we must give strength.” He was followed by the representative of the Syriac Orthodox Church, who asked for the intercession of God so that peace in the world and the healing of the sick, especially in this year of the pandemic, is possible.

Fr. Patton then spoke briefly. "The announcement of the resurrection of Jesus is the only vaccination that saves us from the virus of Death, fear, division and life without meaning. Today it is up to our churches that live in Jerusalem to announce that Jesus has risen,” he commented.

Afterwards, a delegation from the Custody went towards the Greek Melkite Catholic Patriarchate,  where they were welcomed by the Bishop Yasser Hayash. The first to speak was the Custos of the Holy Land, who repeated that it is Jesus who saves us. "Today,” Fr. Patton commented,  "I feel that it is particularly up to our churches of Jerusalem to accept the invitation given to Mary Magdalene, “go to my brothers and tell them that you met me, that I am alive, that my tomb is empty, that fear, anguish and despair are defeated forever.”

The Bishop Hayash enthusiastically answered this wish.. "I think this year’s resurrection has been a strength for everyone,”  the Greek Catholic bishop said, “we have felt that Christ is not far from us and that Jesus wants us as witnesses.”

At the end of the morning, the Franciscans hosted His Beatitude Pierbattista Pizzaballa, the Latin Patriarch of Jerusalem, who had lunch with them at the Convent of St Saviour. 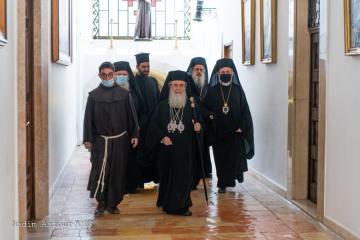 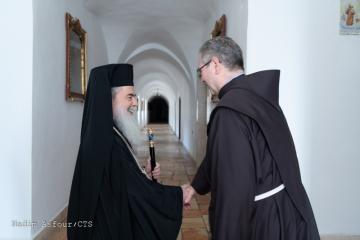 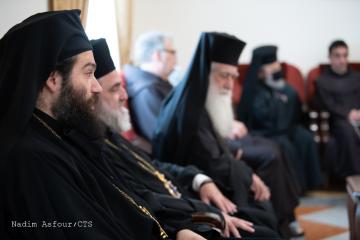 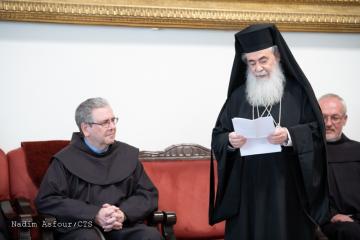 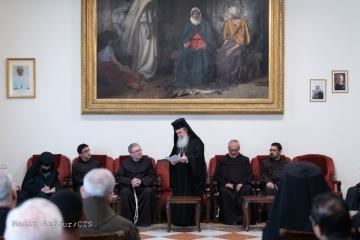 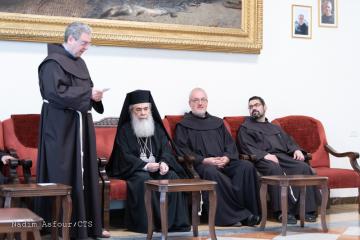 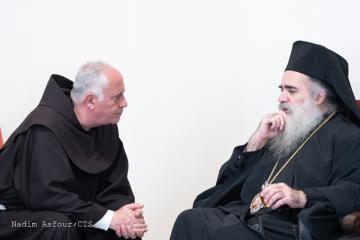 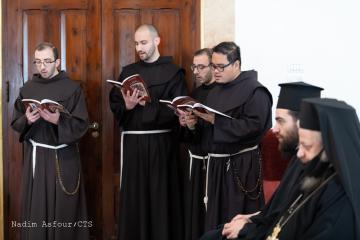 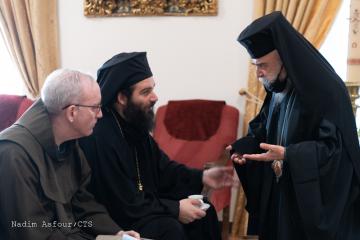 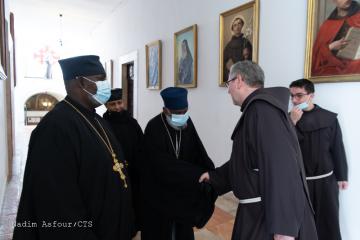 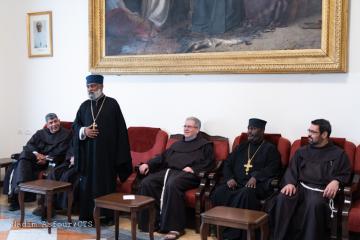 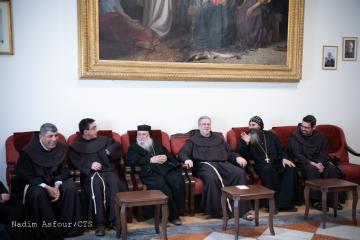 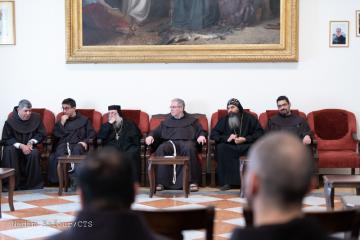 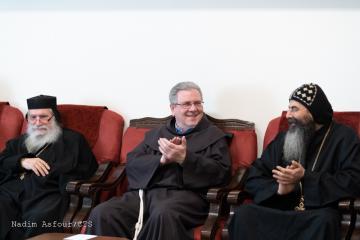 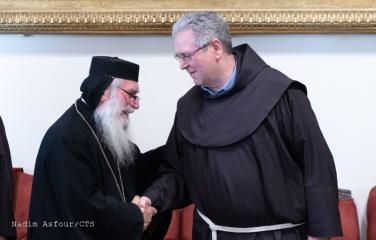 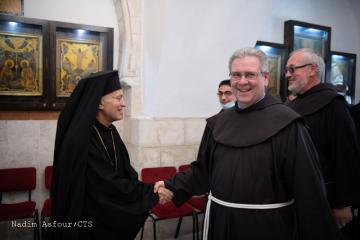 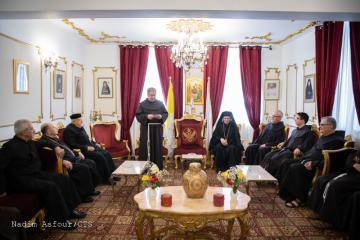 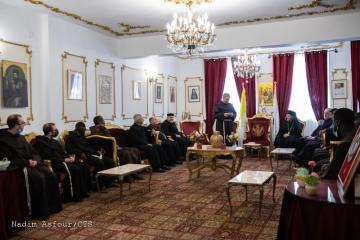 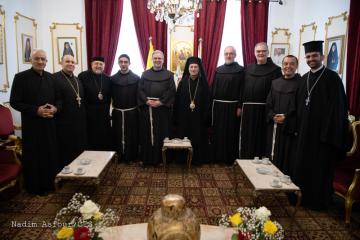