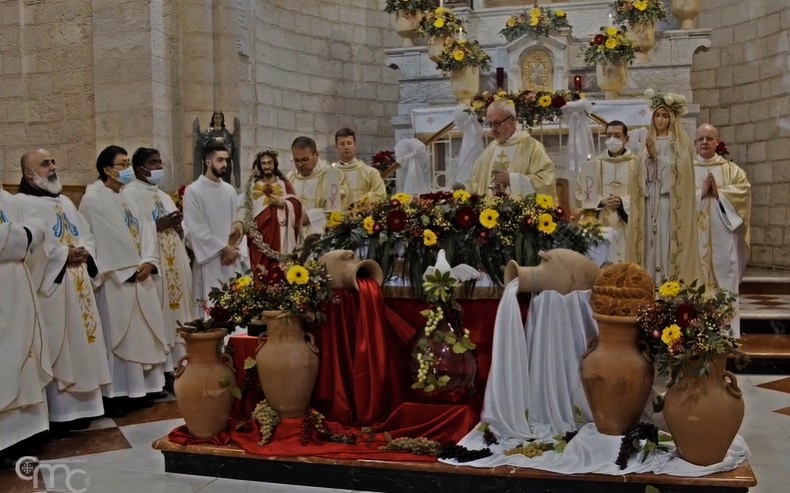 About ten kilometers from Nazareth, in the Holy Land, there is Cana, also called Kafr Kanna, which in Arabic means village of Cana. This location is mentioned in the Bible to be the place of the first miracle of Jesus, who turned water into wine on the occasion of a wedding feast.

The Shrine of Jesus' First Miracle is located here, under the custody of the Franciscans, who have been present in Cana for three centuries.

Br HAITHAN YALDA HANO, ofm
Parish Priest
"Underneath the Main Church, which is behind me, we also have - as Christian Archaeology explains - the remains of a Byzantine Church."

According to the Gospel of John, during the wedding, realizing that the wine had run out, Mary said to Jesus, "They have no more wine". Jesus answered her, "Woman, what do you want from me? My hour has not yet come". His mother said to the servants, "Whatever he tells you, do it".
There were there six stone amphorae for the ritual purification of the Jews, each containing from eighty to a hundred and twenty liters. Jesus said to them, "Fill the jars with water," and they filled them to the brim. He said to them again, "Now take some and bring it to the one who is in charge of the feast," who, after tasting the wine, approved it. According to the evangelist, "This was the first miracle of Jesus, performed at Cana of Galilee."

Br BRUNO VARRIANO, ofm
Guardian and Rector of the Basilica of the Annunciation of Nazareth
"In this time of pandemic, I think the message of Cana is that the sufferings and difficulties that we experience purify us and this purified water leads us to joy, to that true joy, that joy of the new wine. This is the witness that the Christians of Cana give and the witness that we, as Christians, give in this celebration."

The solemn Mass was presided over by the Vicar of the Custody of the Holy Land, Br. Dobromir Jasztal.

Br DOBROMIR JASZTAL, ofm
Vicar of the Custody of the Holy Land
"It is a great feast, but it is also - we can say - the "third epiphany" that we have celebrated: the first we celebrated in Bethlehem, when Jesus manifests himself to the people, the second we celebrated on the banks of the Jordan, where the Father presents Jesus as his son and redeeming servant. And then at Cana, Jesus manifests his presence in the midst of the community, and from his presence comes that gift of new wine."

On the occasion of their silver wedding anniversary, this couple renewed their wedding vows.

REEM ABUNASSAR
Couple from Haifa
"Today is very special, very nice, very spiritual for me and I hope that Jesus Christ and the Virgin Mary will be with us for the rest of our lives."

WADIE ABUNASSAR
Couple from Haifa
“We are excited: it is our 25th anniversary, which is a blessing. We came here to pray with the community of Cana to receive the Lord's blessing directly from the place he blessed, where he performed his first miracle.”

To commemorate the Feast of Cana is to celebrate the first of the many miracles that Christ continues to perform in humanity.

Cana of Galilee: work in progress for the new Holy Land School