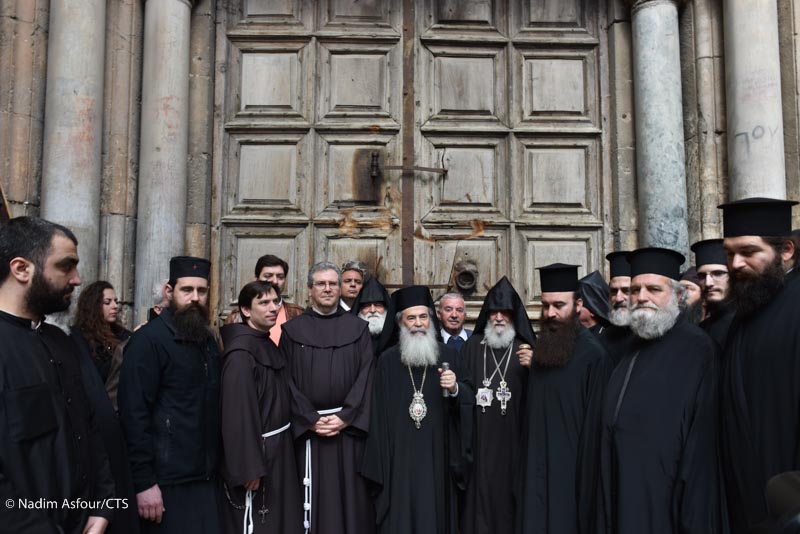 We the heads of Churches in charge of the Status Quo over the Christian Holy Sites in the Holy Land, the Greek Orthodox Patriarchate, the Custody of the Holy Land and the Armenian Apostolic Patriarchate, approach Your Excellency following information we received that government officials are attempting to speedily advance the legislation of the controversial bill, which is intended to expropriate rights of churches in their lands.

According to various reports, the scandalous bill will soon be presented to the Ministerial Committee for Legislation.

This bill was one of the main reasons for the recent crisis that developed between the Christian community in the Holy Land and the State of Israel and, together with the imposition of arbitrary and unlawful liens on church bank accounts for alleged municipal taxes, in flagrant breach of the Status Quo, brought us to order the closure of the Church of the Holy Sepulcher as an act of protest.

Regretfully, certain elements in the government of Israel are still attempting to promote divisive,racist and subversive agendas, thereby undermining the Status Quo and targeting the Christian community on the basis of extraneous and populist considerations.

We view with great severity such conduct by the government of Israel, which contravenes the personal commitment given by Your Excellency whereby the issues that led to the decision to close the Church of the Holy Sepulcher would be resolved through dialogue and understanding. To this end, Your Excellency appointed a special committee headed by Minister Hanegbi. The committee was supposed to examine the issues and submit its recommendations after dialogue with us.

To date and despite the passing of more than three months, no dialogue whatsoever has taken place with us. We view such conduct, from those who promote the bill, as a flagrant violation and undermining of Your Excellency's commitment and of the basic and fundamental freedom of worship.

We strongly believe that this bill constitutes a systematic and unprecedented attack against the Christians of the Land and violates the most basic rights thus trampling on the delicate fabric of relations between the Christian community and the State of Israel for decades.

We, the heads of the Churches, call upon you, Mr. Prime Minister, to act quickly and decisively to block the bill whose unilateral promotion will compel the Churches to reciprocate.

Please accept, Sir, the assurances of our highest consideration.