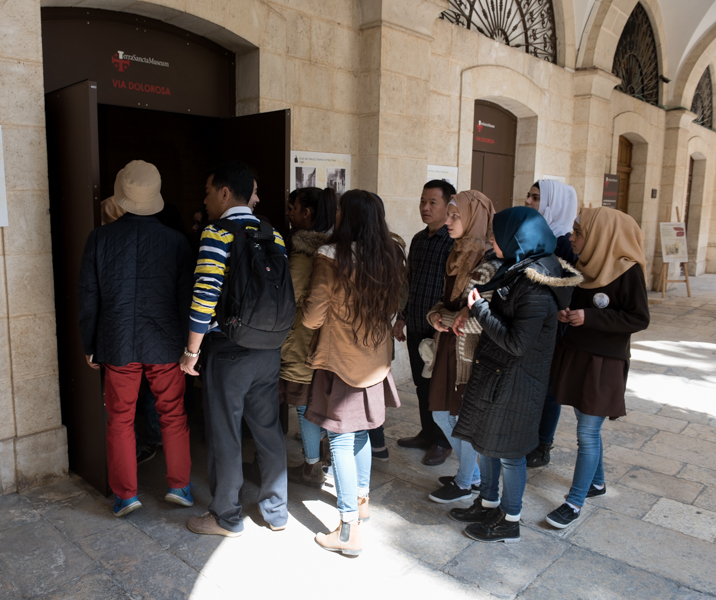 Introducing the city of Jerusalem to its children is the purpose of the project "Learn closely - guided tours of historical and religious sites", promoted by the Pro Terra Sancta Association (ATS), in collaboration with the Jericho Mosaic Center.

Introducing the city of Jerusalem to its children is the simple, but unexpectedly necessary purpose of the project "Learn closely - guided tours of historical and religious sites", promoted by ATS, the Pro Terra Sancta Association, in collaboration with the Jericho Mosaic Center.

Launched by the latter in 2016, together with UNDP and the Islamic Bank, the project was possible thanks to the involvement and contribution, in recent months, of the Custodian NGO (non-governmental organization) which has allowed its extension until May 2018.

NIHAD ABBASI
Students' Chaperone
"During our tours, we talk about history and about major Jerusalem sites, following two major thematic routes: mosaics and water. We have, therefore, visited places related to these two themes, such as the Church of St. John, the Al-Aqsa Mosque, the Convent of the Flagellation or the Via Dolorosa and the Church of the Holy Sepulcher. We have noticed a great desire to participate in the project, because many people, even though they live here, they do not know the history, tradition and culture of their own city.”

Since the school year 2016/17, the initiative has already involved nearly 2,000 students, aged 8 to 15, in addition to their teachers and parents. So far, 13 schools have joined the project, for a total of nearly 100 visits. The inevitable stop is the "Via dolorosa" and the transmission section of the Terra Sancta Museum at the convent of the Flagellation.

CLARA BORIO
ATS - Pro Terra Sancta Association
"The route includes both Christian and Muslim sites; in fact [the students] visit the Mosque, the Church of St. Anne and then they come here, where they watch the video that lasts 15 minutes. They are very happy because this is a novelty for them.”

"We visited the Mount of Olives and Gethsemane and then we saw this video. I liked it so much.”

"We are happy to have visited and to have discovered new churches."

"The commenting in the video is done very well. The teachers helped us and explained to us the Palestinian tradition."

Most of the schools participating in the project are Muslim, as are some of the chaperones who accompany the students. This is a little gesture of "good neighborliness" and friendly coexistence, which goes in the direction of the wish expressed by Custos Francesco Patton for the various sections of the Terra Sancta Museum: "Let the children come too, so they learn about this beautiful and charming story to which we also belong.”