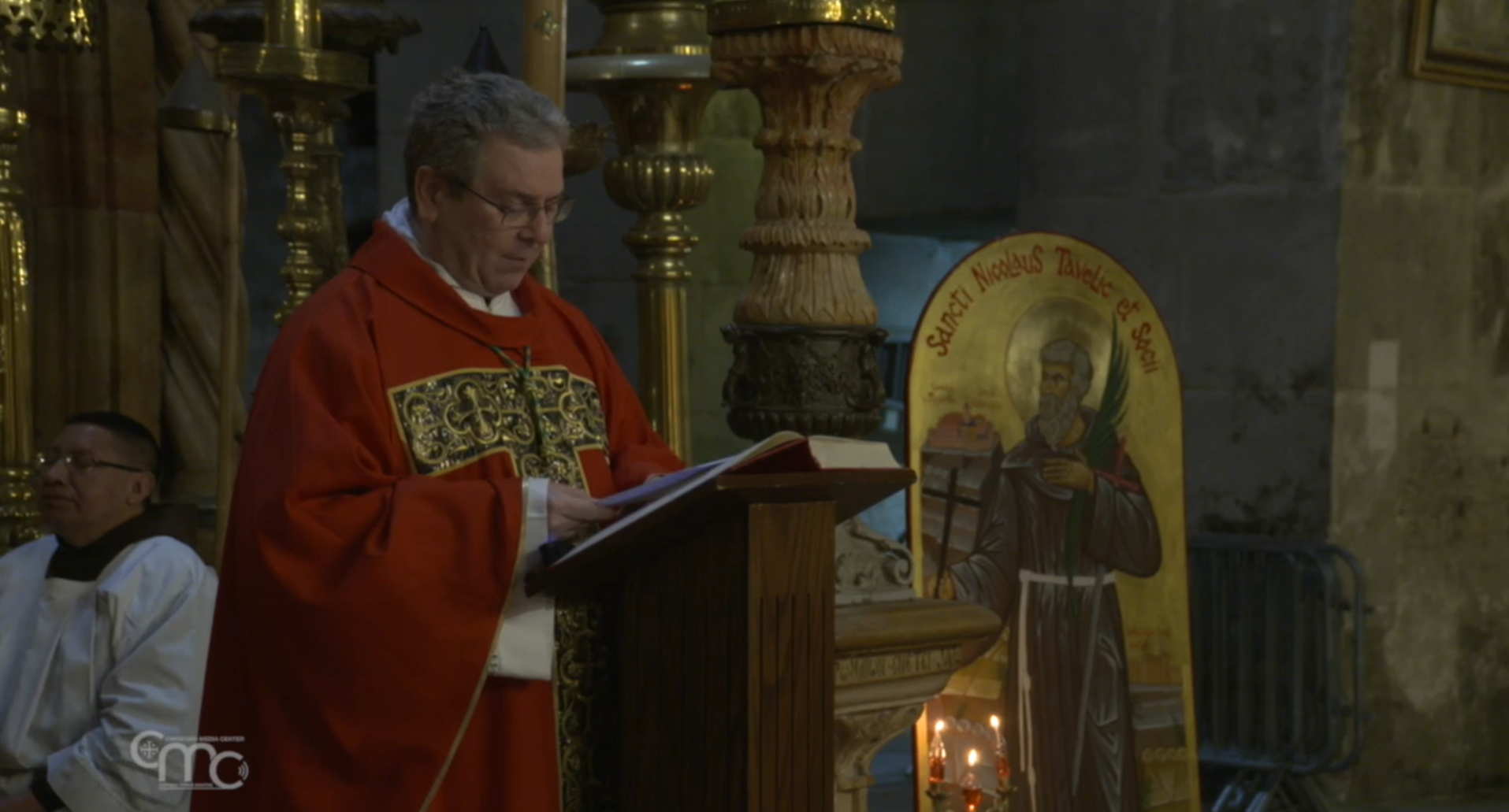 On November 14, the Church celebrates the memory of St. Nicholas Tavelić, Peter of Narbona, Deodatus of Ruticinio and Stephen of Cuneo, the first Franciscan martyrs of the Custody of the Holy Land.

Nicola Tavelić and his companions lived in Jerusalem in 1391 in the monastery built on Mount Zion near the Upper Room. The difficult context did not discourage the Franciscans who felt called to proclaim the Gospel. But public evangelization - then forbidden - led the group to martyrdom.

Br NARCYZ KLIMAS, ofm
Prof. History of the Church and Custody of the Holy Land
"We know that they came out of the Upper Room to preach at the Qadi of Jerusalem. At the meeting with the Qadi, they presented their position: "they had come to preach the Gospel, so that all souls would be saved, including that of the Qadi, of the nobles of Jerusalem". After this meeting, they were ordered to convert to Islam. They did not obey, and as punishment they were condemned to death. A sentence that was probably carried out right here at the door of Jaffa, which is behind me. We do not know exactly the place, because today's walls are from the sixteenth century so they are not from the time of the death of St. Nicholas (1391), and his companions."

On June 21, 1970 in the Vatican Basilica, the 1391 martyrs of Jerusalem have been declared Saints by Pope Paul VI. On that occasion, the Holy Land Magazine came out with a special issue dedicated to the Franciscan Saints and to the spiritual and historical aspects of their lives in the difficult times of the Franciscan Custody of the Holy Places.

Br. Francesco Patton, Custos of the Holy Land, commemorated the first martyrs of the Custody at 6.30 a.m. on Saturday morning, November 14. He presided Mass together with the Franciscan community and with the reduced participation of the faithful because of the restrictions due to the pandemic.

In his homily, the Custos stressed how: for the friars of the Holy Land, the testimony of St. Nicholas and his companions is an example of integral Christian life, of full adherence to one's vocation and missionary courage. "This reality finds in Martyrdom even today the perfect imitation of Christ", as Paul VI stated in the Homily of Canonization.

Br FRANCESCO PATTON, ofm
Custos of The Holy Land
In the martyrdom of St. Nicholas and his companions, in his testimony, there is also another aspect that is very current: that of internationality. Four friars: Nicholas is Croatian, two others are French and a fourth is Italian. We also see how this is something very contemporary.
The Custody of the Holy Land, our mission in the land of the Incarnation and Redemption, has been an international presence from the beginning, and a sign of what internationality is; it is a sign of the Church. These 4 are the sign of a new humanity on the one hand, and for us also of this international, missionary fraternity, which is still living in the Holy Land today.

For 800 years the Franciscans have continued their mission: to preserve the Holy Places.

Br FRANCESCO PATTON, ofm
Custos of The Holy Land
"The friars pray here, and in all the holy places because this is the first mandate that the church has given us. And so even in difficult times, like the pandemic, our prayer, our listening to the word of God, our proclamation of the word of God, must be a food that gives us strength, that keeps hope alive. Then there is also another dimension of salvation, which is the eternal one that makes us place the experience of illness and death on the horizon of life in God."

For Brother Sinisa, a Croatian from the Franciscan community of the Holy Sepulchre, it is a day of celebration here in Jerusalem, as well as in his home country.

Br SINISA SREBENOVIC, ofm
Custody of the Holy Land - originally from Croatia
"It is the pride of a small people who has a Saint, the first Saint of modern times."