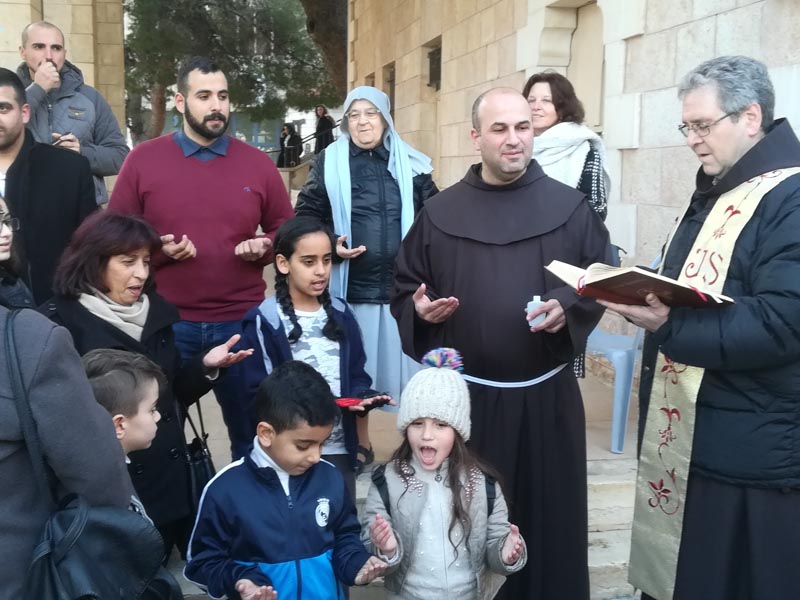 The initiatives of Ats Pro Terra Sancta in support of local Christians in Bethlehem involve the children, the students of the Terra Sancta College and all the families.

Saturday January 20th, in Bethlehem, was a day filled with new inaugurations.
The holy water of the Custos of the Holy Land, Francesco Patton, blessed various structures, which were expanded or renovated thanks to different projects carried out by the ATS Pro Terra Sancta NGO, in support of the local Christian community and particularly of the youngest children.

MELANIA ROMA
Ats Pro Terra Sancta
"The 'Free to play' project was created by the desire to rebuild the playground of Bethlehem Parish Center, which was in poor condition. The floor was broken and some games were rusty. Its ultimate objective is to give families and children a colorful, neat and clean place for the young ones to play safely.
The initiative was made possible thanks to the contribution of Caritas Antoniana of Padua and of some private donors of Ats Pro Terra Santa.”

The work involved the replacement and the addition of new games, besides the introduction of a partly shock-proof and partly synthetic grass floor, instead of the concrete one.
The objective is to offer locals a new opportunity to meet, in a place that was a historical meeting point for Christians in Bethlehem.

Br. RAMI ASAKRIEH, ofm
Pastor - Bethlehem
"This park is very important for [the local] Christians and for the children of Bethlehem also because it is located in a center that offers services to all human sectors: social services, youth ministries and women's services are available. It is a meeting place for everyone: a safe, beautiful place that now is even more beautiful.”

On the same day, Father Custos inaugurated the Exhibition on Saint Francis of Assisi at the Terra Sancta College. The exhibition, previously displayed in the curia of Jerusalem, was created to commemorate the 800th anniversary of the Franciscan presence in the Holy Land and reproduces Giotto's mosaics from the Upper Basilica of Assisi, in Italy.

In the evening, the inauguration of 21 new computers and of the restored computer lab designed for students enrolled in the technological program, took place.
This was a day of small new beginnings, sealed by a polyphonic concert in which pupils and teachers of the school performed.