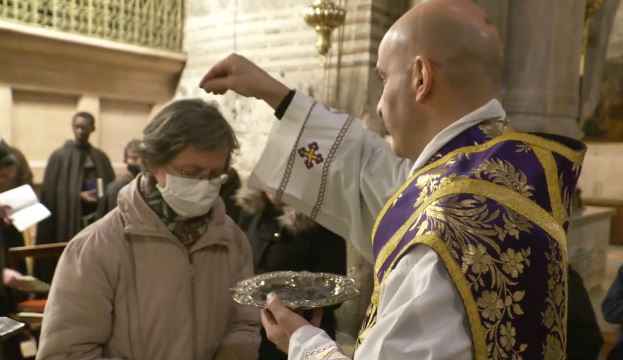 A composed line of faithful receive the ashes on their heads, in front of the empty tomb: thus begins, early in the morning, Lent in the Basilica of the Holy Sepulchre in Jerusalem.

"Too often - said Fr Peroni during his homily - we are influenced by our own and others' judgment, which is almost always ruthless and cruel. But to live preoccupied with the gaze of others is a foolish attitude: the disciple of the Lord is called to live constantly under the gaze of God the Father, a gaze that is demanding but liberating, true and merciful".

Lent is marked by a commitment to conversion, but also by hope in view of Easter.

Mgr VINCENZO PERONI
Custody of Holy Land
"Easter is always and necessarily about hope; if it is not about hope, it is not Easter."

That of 2021 will be the second during the pandemic. Some timid glimmer of light, however, can be seen, also for the modalities in which in the Holy Land it will be possible to celebrate the most important feast of the year for Christians.

Br SALVADOR ROSAS FLORES, ofm
President of the Holy Sepulchre Convent
"By now we know the news, we see the vaccinations, we know of the sick who thank God are healed, so we are already seeing the light at the end of the tunnel, as is commonly said.
At this year's celebrations maybe not all those who wish to come will be able to, but compared to last year, there will be a larger number. The security measures will remain, however, until we can finally sing victory against this virus."