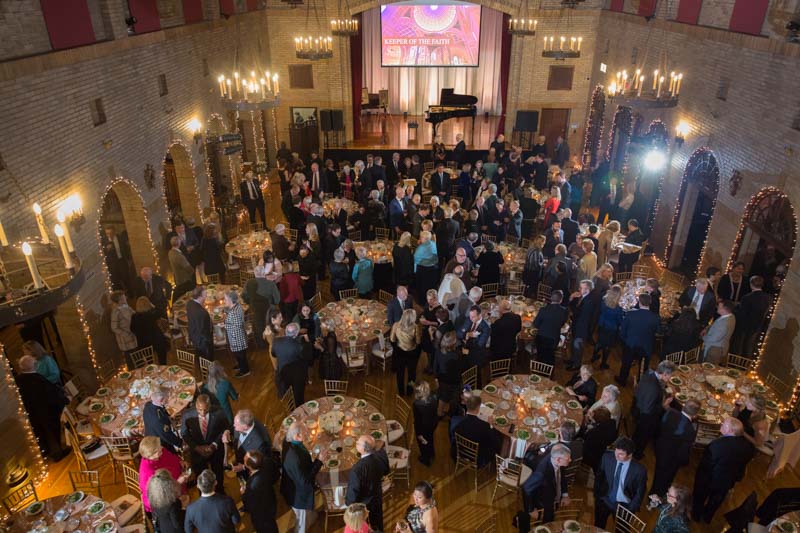 In his homily at Mass, Father Custos drew upon the stories of the two widows in the day’s liturgy: the widow of Sarepta of Sidon (today’s Lebanon) who sharedwhat little she had with the prophet Elijah, and the widow at the Temple who put a few small coins into the, as Jesus watched. “Why,” Father Custos asked, “did these two poor widows give so much in relation to what they had? They did such a thing because they had faith in God, because they wanted to manifest their own love of God, and because faith and love brought to them the realization that God would take care of them, no matter what”. He suggested that “when someone gives freely and in an authentic way, he or she manifests the willingness of self-giving [which] Jesus Christ did on the Cross.” Father Francesco went on to cite the example of the witness of two friars serving in Syria at present, FathersHanna Jalloufand LuaiBsharat, both living in villages in a dangerous area.
Father Custos concluded by asking the Eucharistic assembly,“Beyond what we possess and the money we can offer and share with others, are we capable of giving ourselves? Are we capable of offering our life in the concrete situation in which we find ourselves living and in the vocation to which God has called us? Are we capable of doing so freely and for the sake of love?May Our Lord Jesus Christ give us such grace, he being the One who made of his own life a gift of perfect love.”

Again,this year, at the conclusion of the gala dinner, Father Custos presented the GratoAnimo Medal, an honor given by the Custody to an individual who has demonstrated a commitment to bettering the lives of Christians and all peoples of the Holy Land and who is supportive of the mission of the Franciscan Custody of the Holy Land. The recipient of this year’s Grato Animo award was Dr. Margaret B. Melady, PhD, President of the Order of Malta Federal Association, one of 47 national associations of the Sovereign Order of Malta. Dedicated to witnessing the faith and serving the poor and the sick through humanitarian assistance in over 120 countries, the Order of Malta was founded more than 900 years ago in the Holy Land and still carries out important missions there.

In remarks to the dinner guests, Father Custos said, “I would like to express my gratitude to each and every one of you, for the love that you show for the Holy Land, and for the support that you have given us for many years and are still giving now, through the Franciscan Commissariat for the Holy Land, here in Washington D.C.”. He went on to call attention to the two anniversaries which the friars of the Holy Land are celebrating: “the 800th anniversaryof the arrival of the first brothers, and of St. Francis of Assisi in the Holy Land [and] the encounter between St. Francis and the Sultan, a meeting of peace and a permanent image of dialogue between persons and believers of different culture and religion.”

Father Custos reviewed the work of the Custody “We try to live the Franciscan life, which is first and foremost an evangelical life of prayer and fraternity at the service of the Church and of the people.” He called attention to the various aspects of the friars’ mission: the custody of the Holy Places; pastoral service to the “living stones,”the Christians of the Middle East; the “strong commitment in the field of education [where] our schools are recognized as a model of living together and of inter-religious dialogue’; the development of the Terra Sancta Museum; the Magnificat Institute, the school of music open to young people of all faiths; various communications mediawhich make known the reality of the Christian presence in the Holy Land; social works, “by which we try to sustain the Christian presence in the Middle East by creating working opportunities and offering apartments for local Christians”; the Custody’s commitment in Syria.
Father Francesco concluded by sharing that, “the number of young people asking to give their life as Franciscans in the Holy Land is increasing in these last three years.” He reiterated his gratitude to those present and asked them “to remember in a special way in your prayers for all of us, the Franciscan brothers who are trying to live our vocation in the Holy Land and in the entire Middle East. I ask you to pray for the persons entrusted to our care and especially for the populations that are sorely tried by war. May the Lord bless each and every one of you and repay you for your generosity.”

The guests enjoyed music at both the Mass and the dinneroffered by Franciscan Brother Alessandro Brustenghi from Assisi. He records for Decca, has sung at venues around the world and is known to American audiences for his solo concert recorded in the Basilica of St. Francis in Assisi, which aired on public television in the U.S. Brother Alessandro was accompanied by Ms. Vivian Choi,a native of Seoul, Korea, raised in Australia, and currently living in New York. Since her debut at the Sydney Opera House at the age of 12, she has toured extensively as a recitalist, concerto soloist, and chamber musician throughout the world, and has garnered many awards.

Also making the journey from Jerusalem were Father John-Luke Gregory, a member of the administrative council of the Custody, and Father Ramzi Sidawi, treasurer (economo) of the Custody. They were present earlier the same week as Father Custos conducted the “visitation” of the friars in the Monastery—a special time for reviewing the life of the fraternity and speaking with each friar about his life and ministry.

The guests at the Gala Dinneralsowere welcomed by Franciscan Father Larry Dunham, Guardian and Commissaryat the Washington Monastery. He presented the “Seraphic Award,” to recognize special service to the Monastery’s mission of Robert and Jean Comstock and William J. and Mary Nöel Page.