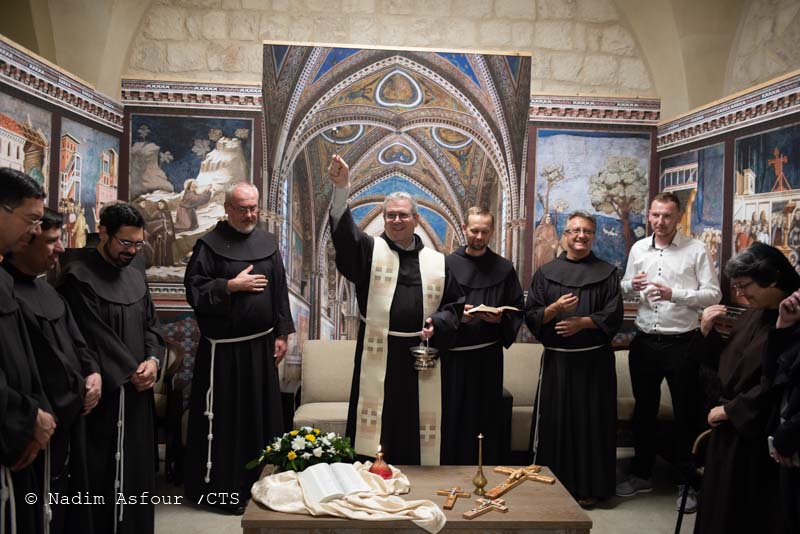 The Christian Information Centerin Jerusalem is a landmark for many pilgrims and Fr. Tomasz Dubiel has been at its head for the past two years. Here, on 17th October 2018, the new multimedia rooms on Jerusalem in the time of Christ were blessed. Unique of its kind, the exhibition includes various rooms including a special section: it will be possible to really visit the places described in the Gospel, from where Jesus was condemned to death to his resurrection.

Active since 1973, the aim of theCICis to offer a service of information free of charge on Christian life in the Holy Land, offering information for pilgrims, answering requests from the media on religious events and making its spaces available for religious, ecumenical and cultural meetings.
Alongside these services, there will soon be something new: a new multimedia exhibition. Many things have changed in recent years, regarding time and technology and this is the very reason for the start, two years ago, of the project which, despite all the many difficulties encountered, is at last about to see the light with the consultancy of Fr. Eugenio Alliata and Fr. NarcyszKlimas.

Five rooms have been created. The first contains a plastic model showing the city of Jerusalem in the time of Jesus. The city is presented in a screening during which the most important places of Jerusalem are illustrated. Thanks to the support of virtual reality, the second room presents some fundamental places in the steps of Jesus before his death: visitors will be able to travel back in time to walk through the Gethsemane, the house of the High Priest, the Lithostotros,Golgotha and see the empty tomb.

In the third room, set up like a small cinema, a video will be screened on the historical developments of the city of Jerusalem which followed on in the period after the Resurrection. There is a special focus on the peoples who have had the greatest influence on these places. The fourth room explains the architectural part of the city: a graphic will represent the developments on the architectonic changes in the different periods of the different shrines, including the Holy Sepulchre. Room number five will contain in-depth information on the Holy Sepulchre, in particular on the Status Quo and the communities that have the custody of the Holy Places. The last room will represent a return to the start: here there is a reproduction of the empty tomb reconstructed following the rules of the time of Jesus, meaning that everything that has been seen during the exhibition has its origin in that empty tomb.

As the Custos of the Holy Land Fr. Francesco Patton, declared in conclusion, the service offered by the Christian Information Centeris one of concrete evangelization. "Paul VI,” said Fr. Patton, “in the apostolic exhortation "Nobis in Animo", speaks of the pilgrimage to the Holy Land, recalling that there is not only a history of salvation but also a geography of salvation. The service of the CICmakes it easier for pilgrims to encounter the holy places and helps the geography of salvation,"and with this new addition it will be even easier to meet Jesus in the real and virtual places.