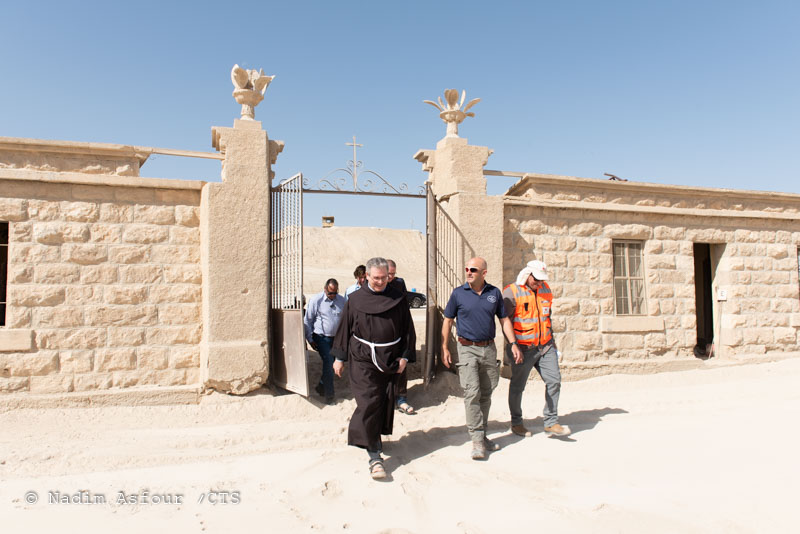 On Wednesday 31st October, we were once again at the Franciscan Convent which stands on the banks of the River Jordan. The Halo Trust has been working here since 2011 on demining the land.On this day, the Custos of the Holy Land, Fr. Francesco Patton was invited to visit the site which is now considered a decontaminated area.

This place, which has been a place of annual pilgrimage since as early as 1641, was bought by the Custody in 1932, but it was not until 1956 that a small church was built and given to the friars of Jericho who kept it open for the pilgrims. Because of the 1967 war between Israel and Jordan, which took place very close to the area, the friars were forced toflee in great haste from the convent, abandoning the area which was never salvaged and surrounded by a minefield of 55 hectares. Thirty-three years after these events, in 2000, an access was opened to allow the visit of Pope John Paul II.

In 2011, the Israeli authorities carried out a first decontamination of the land to make the area accessible to pilgrims, but it was not until January 2018 that the Halo Trust concentrated its interest on this particular area. "Operations on the site of the baptism started actively on 11th March 2018.” said Ronen Shimoli, Program Manager ofthe Halo Trust, "When we went in, during the demining operations of this building, I remember a cross lying on the table, surrounded by dust, left there since the early 1970s and the photos of the Custos and of the Pope hanging on the wall and many other small objects that show how people would come here and pray." “It was a real challenge but an honour to work on this site,” said Shimoli with great emotion, confirming that knowing that this very important place will be renovated is something that fills him and the 24 workers who come from three different parts of the world (Georgia, Israel and Palestine) with joy.

The Custos of the Holy Land, Fr. Francesco Patton, was visiting the site for the first time, accompanied by Fr. Sergey Loktionov–in charge of the Technical Department and the Custodial Archive. "Demining a field,” said Fr. Patton, “is always a good thing because it means transforming a battlefield into a field of peace. This is a site linked to the event of the baptism of Jesus, with the demining we hope to be able to restore it and recover it so that we can also encourage pilgrimages here as well.” Fr. Loktionov has guaranteed that the preliminary and final project for visiting the site by pilgrims is under development, thanks to the team of the Technical Department, made up of engineers and architects. "With the demining,” commented the Custos, as well as encouraging pilgrimages, maybe one day it will also be possible to move from one bank to the other, the Jordanian one.”

The crossing: this, as Fr. Patton recalled, refers to what happens in baptism but even more: it recalls the entrance of the people of God into the Holy Land from Jordan, which can be read about in the Bible when speaking about the crossings by Elias or Elisha as well as by that of Jesus and the Apostles who freely moved from one bank to the other.

According to the estimates of the Halo Trust, a good 30,000 square metres of surface area will very soon be free of mines.