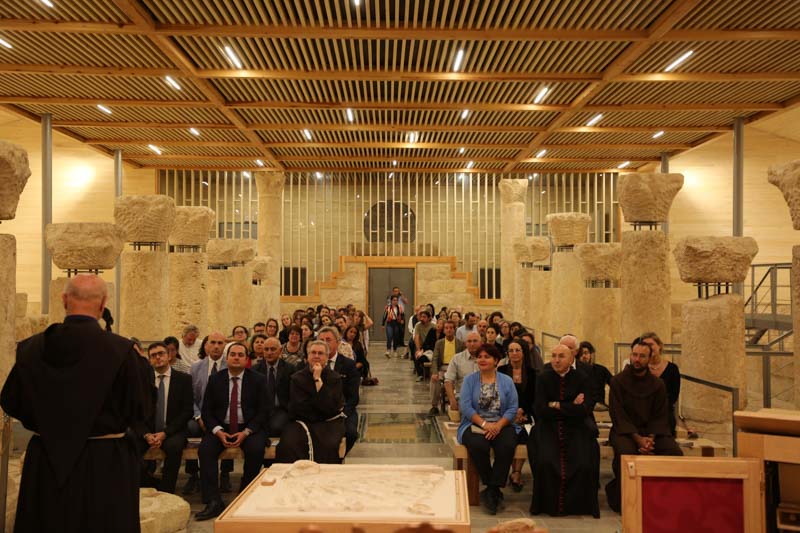 The Terra Sancta Organ Festival honored the memory of the archaeologist Fr. Michele Piccirillo (1944 - 2008) on the tenth anniversary of his death, dedicating the inaugural concert of the 2018-19 season to him. The concert took place at the Basilica of the Memorial of Moses on Mount Nebo in Jordan, on Thursday, September 20, 2018. The musical protagonist of the evening was Alessandro Licata, an organ professor at the Santa Cecilia Conservatory in Rome, assisted by Nicola Puccini, who built the organ, which was donated by an anonymous benefactor to the Memorial of Moses in 2015. The program included the Goldberg Variations by Johann Sebastian Bach.

The day before, the conference on the theme of “Thirty Years of Mosaic Restoration and Beyond,” was held at the headquarters of the American Center of Oriental Research (ACOR) in Amman. Fr. Rosario Pierri (Studium Biblicum Franciscanum) gave a speech and Franco Sciorilli, a mosaicist, lectured. Both the Terra Sancta Organ Festival and ACOR wished to remember Fr. Piccirillo—each in their respective field—their friend, brother and colleague. The Italian Embassy in Amman, which for years always supported Fr. Piccirillo, generously collaborated in organizing the concert, along with the Franciscan friars of the Custody of the Holy Land at Mount Nebo and Amman.

Fr. Michele Piccirillo, a friar of the Custody of the Holy Land, was one of the greatest archaeologists in Jordan and the Middle East. The archaeological complex of Mount Nebo—visited by hundreds of thousands of tourists and pilgrims— represents the peak of his work, and is certainly the most visible and well known.

The event on September 20 was both a concert and an homage: each musical piece was followed by a short commemorative speech, given by Costanza Farina, the UNESCO Representative to Jordan ; Barbara A. Porter, the Director of ACOR (American Center of Oriental Research) ; Fr. Quirico Calella, a friend of Fr. Piccirillo ; and Győző Vörös, (Hungarian Academy of Arts and Jordanian Department of Antiquities), a follower of Fr. Michele when he was the Director of the Machaerus Excavations. On this occasion, Prof. Győző Vörös discussed the restoration of a stucco piece discovered by Fr. Michele Piccirillo and by Fr. Virgilio Corbo in Machaerus, inside of Herod's Palace.
The evening was hosted by Br. Riccardo Ceriani, the director of the Terra Sancta Organ Festival. The Custos of the Holy Land, Fr. Francesco Patton, and Marco Salaris, the first secretary of the Embassy of Italy in Amman, greeted and thanked all of those present.
At the end of the concert, all of the participants entered the monastery gardens and visited the grave of the Franciscan archaeologist, who had wished to be buried there.

After the event on Mount Nebo, the concerts of the Terra Sancta Organ Festival will continue in Rhodes from September 28 to October 6 ; in Lebanon on October 20 ; in Israel and Palestine from October 23 to November 2 ; in Syria for the Damascus Pipe Organ Week from November 18 to 25 ; again in Lebanon in the new year from February 2 to 10, 2019 ; and finally in Cyprus (dates are yet to be determined). The updated program can be viewed on the festival's official website: www.tsorganfestival.org. Many concerts from previous years are available on the Terra Sancta Organ Festival's YouTube channel.