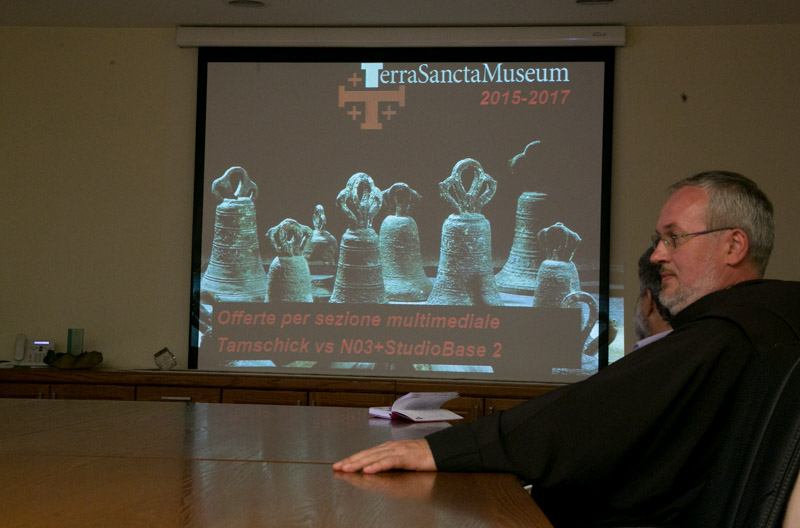 In Spring 2013, the Custody of the Holy Land unveiled its plan to open the Terra Sancta Museum in Jerusalem. “The only museum in the world dedicated to the roots of Christianity and the conservation of the Holy Places.” (See the Terra Sancta Museum article)* Even though its originally planned 2015 completion is unlikely (and the website dedicated to the project http://www.terrasanctamuseum.org/ preparations are underway.
Work has begun at both monasteries that will host the museum—at the Monastery of the Flagellation, the second station of the Via Crucis, and at Holy Savior Monastery at the New Gate).
This project requires no new construction work in either monastery. A judicious game of musical chairs is necessary to free up the 2573 square meters that will become the surface (at ground level) for the exhibition.
At Holy Savior Monastery, in order to make space for the current library, where part of the museum will be placed, a new setting had to be found. The new library was unveiled in February 2013. However, the printing office will still need to be moved.
Until that time comes, old and disparate storage locations are being dug out. A few of them came with surprises, when under wet plaster, a beautiful stone wall was uncovered that could possibly date back to the fifteenth century or perhaps even earlier.
But what takes the most time are the struggles with water leaks. “We are not going to exhibit some of the most beautiful pieces of art from our treasure in a place where the humidity, leaks, or God knows what other water damage could destroy them,” explained Fr. Stéphane, who is in charge of the Custody’s Cultural Heritage.
Therefore, it is necessary to dig behind the walls, under the floors, and to dig up all of the old pipes that are not always dry, despite the fact that they are no longer in use. But the smallest blow with a pickaxe can bring its own share of surprises, and this continues to slow down the process.
At the Monastery of the Flagellation, Fr. Eugenio Alliata maintains a resigned attitude. “There's a spring under our feet. It will not dry up and the humidity will remain.” Duly noted. We will work through it. For now, this moisture brings about cooler temperatures inside compared to the outside temperature in what will be the multimedia museum.
It also had to be emptied. For years, it served as a lapidarium, a storage place for all kinds of stones. From a column with Hebrew, Greek, Latin and Syriac inscriptions, to funeral urns that date back to the time of Christ, to the balls that were launched by catapults belonging to the Emperor Hadrian ...
On Friday, May 15, the lapidarium and future multimedia museum welcomed almost the entire museum committee. All morning, the committee focused on one topic: knowing that the aim of the project is to provide a useful tool that will allow people to more consciously live out the Way of the Cross and to see the places that make it up, how do we actually carry this project out? As their first challenge, the committee worked with some agencies specialized in multimedia storytelling, and this allowed them to select two studios, which have offered to work on some detailed projects.
Should the focus be on the technology of this one or didactic message of the other? How much space will each exhibit take up? How smooth will the transition be for groups or individual visitors coming in? Which one will showcase the museum through a maximum number of languages without becoming too difficult to manage? Where will tickets be sold? Will groups be able they book their visit in their own language? And how flexible will the hours be? Should a group sit down to watch a 5-minute video? Each point and detail was discussed and debated. Fr. Dobromir Jasztal, Vicar of the Custody, noted that other places are already showcasing Jerusalem’s history and that a Franciscan site must stand out, with the thought that it will welcome pilgrims on their journeys of faith. The debating brought ideas forward and enriched the decision-making process. Archeologists came to the table with their point of view, and art historians came with theirs. The Franciscans, who are used to guiding pilgrims, know about the inherent difficulties in this task, and they provided guidance, as the museologist reacted and the architect calculated. The project must also include a framework for development over time. With the development of information technology, which one of the solutions has the greatest longevity? And people began to daydream—but it is really a dream—of augmented reality, when with a headset on, we will be able to walk into the Constantine-era Holy Sepulcher in 3D... Ok, back to reality. We must ask the two agencies about some clarifications and developments.
In all scenarios, the agencies ensure that they will be able to complete their projects within six months. The work that still needs to be done in the lapidarium will likely take less time than that. And one of the participants stated, “Who knows, we may even be able to open this part of the project in 2015?” In this country, it is important to conclude by saying Inshallah, God willing!