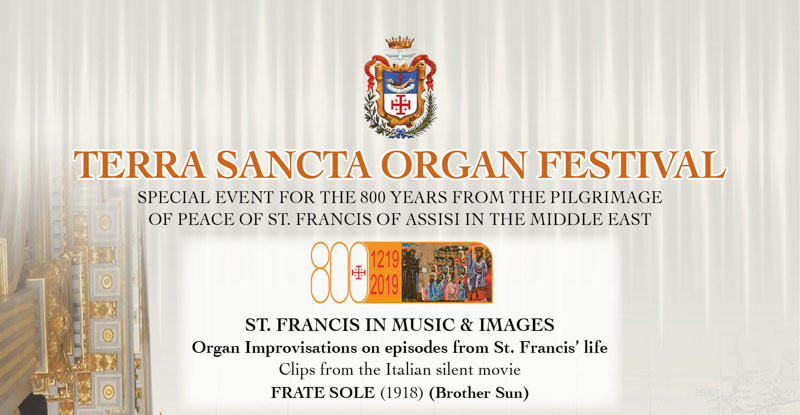 The 2019/2020 season, which starts on 26th September in Jordan, presents over 45 concerts in more than 20 venues, in the countries where the Custody of the Holy Land is present. The complete programme can be seen on the Internet site of the festival, www.tsorganfestival.org.

In addition to the normal programming, this year the festival is  also offering a special event entitled “St. Francis in Music & Images”, on the occasion of the 800th anniversary of the Pilgrimage of Peace by St Francis in the Holy Land. It is a selection of scenes from the silent Italian film “Frate Sole” (“Brother Sun”)  (1918) with a musical accompaniment and commented images, as was the practice at the dawn of the cinema. A further particularity is that for the first time in the history of these countries, a screening is to take place in the churches with the musical accompaniment improvised at the organ. For the occasion, a programme has been prepared which presents the film, but also the spirituality of St Francis. The programme – which can be downloaded from the home page of the festival website – has been written in Arabic for the public of the concerts in Jordan, Palestine, Syria, Lebanon, in  Greek for Greece and Cyprus, in Hebrew for Israel and in English for everyone.

As it is an Italian film, accompanied almost always by Italian organists and also considering the fact that St Francis is Italian, it is not surprising that most of the sponsors of this initiative are Italian, such as the Embassies of Italy in Jordan, Israel, Cyprus, Greece and the Italian Institutes of Culture in Athens, Tel Aviv and Beirut. The organists all have international careers, like Eugenio Maria Fagiani, Ferruccio Bartoletti, Mario Mariani and Fausto Caporali. The Hungarian Robert Kovács, the organist of the Philharmonic Orchestra of Vienna (the famous Wiener Philarmoniker), however, deserves a special mention as he stands out for being the only non-Italian and above all for having agreed to play in Syria, in Damascus, Aleppo and Latakia.

Naturally the thirteen concerts for the 800th anniversary of the Pilgrimage of Peace of St Francis in the Holy Land do not exhaust the offer of the Terra Sancta Organ Festival. It includes the concerts by the Spaniard Juan Paradell Solé, organist of the choir of the Sistine Chapel un the Vatican (i.e. one of the Pope’s organists), the Romanian Erzsébet Windhager-Gered (concerts organized in collaboration with the Romanian Institute of Culture, Tel Aviv) and the Hungarian Levente Kuzma (concerts organized in collaboration with the Embassy of Hungary in Tel Aviv and with the office of Representation of Hungary in Ramallah).

Eucharistic celebration in honour of Belgium at St Saviour’s