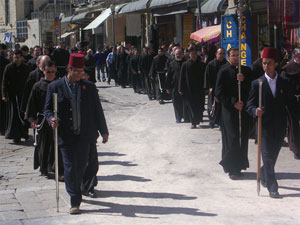 Saturday 11 March 14:00hrs: The procession lead by the Latins together with the Franciscans, custodians of the Holy place, inaugurated the series of processions at the Holy Sepulchre. In fact, the Orthodox having started their Lent the preceeding Monday, all the other Churches that enjoy rights as per the status quo take it in turns in celebtaring solemn entrances followed by a procession.
According to tradition, the Latins entered first. Once the last ones made their entrance, the Franciscans could start their procession within the Basilica, during which the Latins go round the Tomb of Christ for three times, “like satellites around the same sun, the Risen Christ”. Therefore five Christian denominations, their clergy, faithful and pilgrims sing at the same time in the Holy Sepurchre: cacophany, the scandal of division? … Some take consider it to be so. On the other hand others might think: “Truly, there is ample room for all in the Lord’s abode!”

The historical roots of the procession
When the Franciscans welcomed the pilgrims to the Holy Sepulchre in 1345, they did this together with the Orthodox. This is witnessed by the accounts of the pilgrims (cf. the English Pilgrim). At the time, the doors to the Holy Sepulchre were always closed and were opened only upon the arrival of the pilgrims, who paid a fee to have them opened. Having gained access, the pilgrims were received by the Franciscans who took them on a “guided visit” of the Holy Place. Afterwards they would settle, for better or for worse, within the Basilica to pass the night. In the meantime the Franciscans carried on their services of welcome and animation of the liturgy. Normally the pilgrims would leave the next day, when the Muslims opened the door, sometimes with no regard towards them.
The processions held today are the liturgical trace of these guided visits of old. In fact, starting from the XVI century the procession became a ritual: it no longer started at the entrance to the Basilica of the Resurrection but from the chapel of the Holy Sacrament, it therefore took place from the Holy Sacrament to the Holy Sacrament. The welcome of pilgrims outside the Basilica happened only on the occassion of the great feasts. With the passage of time the procession becomes a devotional act of the Friars of the Basilica that happens daily.