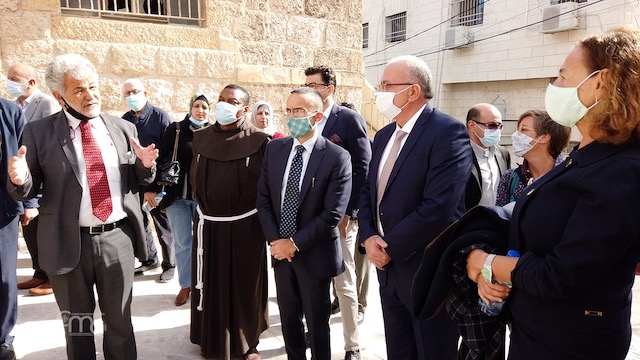 A new step forward in the rediscovery and revival of Bethany, the Arab Al-Azariya, the village of Marta, Maria, and Lazarus. After five months of work, taking advantage of the absence of visitors due to the Coronavirus pandemic, the tomb from which Jesus resurrected his friend Lazarus shines new light.

Among the discoveries there are also two ossuaries containing some bones, still to be studied and dated with precision. Although the most precious thing remains the reliefs and the studies made to deepen the knowledge of a really complex archaeological site: over the centuries four churches have risen near the tomb of Lazarus, which since the fourteenth-century borders the Al-Uzeir Mosque. Only two centuries later the Franciscan friars dug the new access, the one just restored.

Giuseppe Fedele, Consul General of Italy, arrived in Jerusalem to visit the entire area involved in the "Hospitable Bethany" project, carried out for over three years by the Mosaic Centre in Jericho and the "Pro Terra Sancta" Association with the support of the Italian Agency for Cooperation and Development.

GIUSEPPE FEDELE
Consul General of Italy in Jerusalem
"Mine is first of all an impression of pride because I believe that Italy, with its funding, with funding from the Italian Cooperation, is promoting a project of great interest and great potential. The site has an enormous historical, archaeological and monumental interest, and even today it represents a beautiful testimony of coexistence, coexistence, and dialogue between religions since it hosts a Muslim religious site and a series of Christian sites."

ISSAM FAROUN
Mayor of Bethany
"It is a very important day for us, to develop unity between Muslims and Christians. In our mentality, the concept of "return to life" is very present here. We want to save this heritage, of which we are very proud: for this reason, we are very grateful to the Italian government and to the Italian Cooperation, to "Pro Terra Sancta" and to the whole team of people who have carried out these important works, and we intend to continue building unity in the future in the ancient city of Al-Azariya."