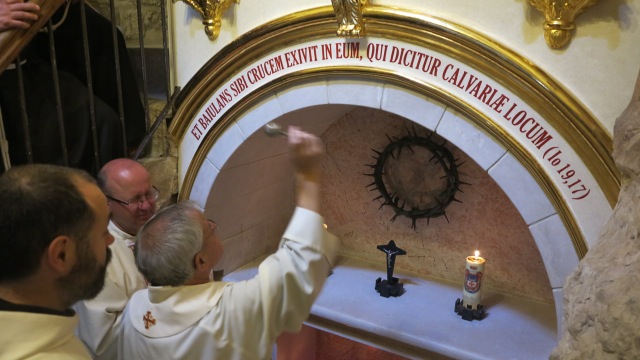 Jerusalem. On Friday, June 7, the restored altar of the Seventh Station of the Way of the Cross was blessed. After Holy Mass celebrated in the upper Chapel of the Sacred Heart, Fra Artemio Vitores, Custodial Vicar, inaugurated the renovated Chapel of the Seven Station with a benediction. Following several months of reconstruction and restoration, the Seven Station has become a “pearl" of the Way of the Cross.

The history of the Seventh Station unites devotion with topographical and archaeological data. According to ancient testimony, there had been a gate to the city in the Western Wall at this point. Over the centuries, the column at this gate became associated with Jesus’ sentence to death and finally with Jesus falling the second time, which is still part of the devotion of the Way of the Cross. Christians called this gate, known as the Old Gate (see Nehemiah 12:39), the Gate of Judgment and the column, the Column of Sentencing.

In 1875 the Custody of the Holy Land took possession of the site where the base of the column is located. From 1894 to 1900 the Chapel of the Seventh Station was restored and embellished with help from France. The painting of Jesus falling under the cross was the work of Francois Lafon (1899) and the altarpiece was made in Paris. During 1995-1996 a shop stall adjacent to the Chapel of the Seventh Station was made into a space communicating with the sanctuary, so that more pilgrims would be able to assist at mass is celebrated there.

More than 100 years since the Chapel was founded, the Custody of the Holy Land decided to carry out a complex restoration project. At the beginning of December 2012 the wooden altarpiece was removed and, together with the painting, was sent to Cracow, Poland. The AC KONSERWACJA ZABATKOW company owned by Mr. Aleksander Piotrowski, carried out the remaining restoration of the altar during the month of March. Plans for the lower part to be realized in stone were prepared by the architect Jozef Dudkiewicz, and the work was carried out by a local company. A stone arch was created in the vault above the altar where a verse is written in Latin: Et baiulans sibi crucem exivit in eum, qui dicitur Calvariæ locum (Io 19,17).