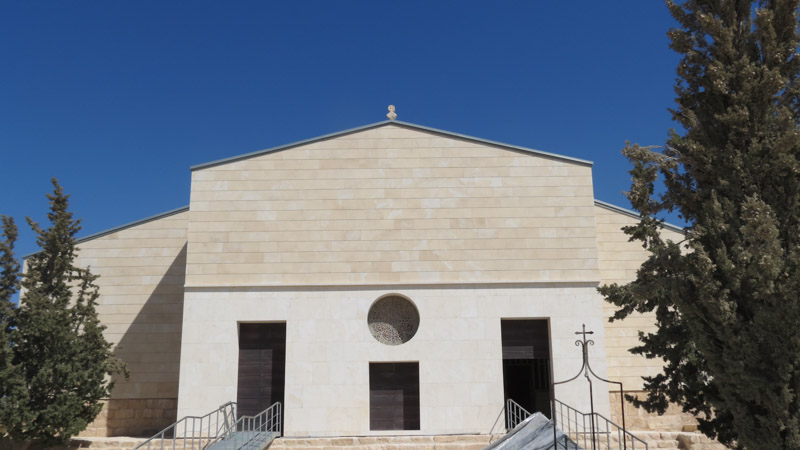 The Memorial of Moses on Mount Nebo is reopening to the public, and visitors will now be able to return and admire some of the most beautiful mosaics of Jordan, as well as the basilica itself.
The official opening will be held over two days, in order to facilitate the large influx of visitors expected for the reopening of one of the most important shrines and one of the most visited archaeological sites in Jordan and the Holy Land.

On Saturday, October 15 a civil inauguration will take place, while on Sunday, October 16 there will be religious celebration. On these two days, the Memorial area will be open exclusively only for these events. Regular opening hours of the Basilica to visitors will resume on Monday, October 17.
Entrance to the ceremony on October 15 is reserved to invited dignitaries and guests only, while admission to the religious celebration (Mass) on October 16 at 6 pm is open to all, subject to the limited available space. The Mass will be presided over by His Eminence Cardinal Leonardo Sandri, Special Envoy of Pope Francis and Prefect of the Congregation for the Oriental Churches.

The symbolic gesture that will mark the inauguration of October 15 will be the opening of the doors of the basilica by the Custos of the Holy Land Fr. Francesco Patton and a senior representative of the Jordanian state. Prior to that, the inaugural speeches will include a message from His Holiness Pope Francis, to be read by His Eminence Cardinal Sandri. The ceremony will also include performances by the Fountain of Love choir and orchestra directed by Tomeh Jbara. The same choir will lead the singing at the solemn Mass on October 16, during which will His Eminence will bless the altar.

To mark this auspicious occasion, the Franciscan friars of the Custody of the Holy Land, who take care of the church and the archaeological site, have organized a series of musical and cultural events. The program of celebrations will culminate with the Christmas Mass in the Basilica December 24 at 10 pm.

On Sunday October 16, on the day of the Religious Celebration, at 9 pm there will be an inaugural concert, as part of the International Terra Sancta Organ Festival organized by the Custody of the Holy Land in the churches of the Middle East and the Levant, featuring the new Mount Nebo Organ. This new Organ of Mount Nebo though small, is the handiwork of the prestigious Italian craftsman Nicola Puccini and seems to be currently the only pipe organ in Jordan. The installation of the instrument and the concert have been organized in collaboration with the Embassy of Italy in Amman. The organ itself was blessed last year in Pisa by His Excellency Archbishop Maroun Lahham, Auxiliary Bishop and Patriarchal Vicar for Jordan. The concert will include performances by the noted Italian organist Eugenio Maria Fagiani, soloists of the Fountain of Love Choir of Amman, and the famous oud player Tareq Al-Jundi, accompanied by Nasser Salameh.

Friday, December 23, at 6 pm, in the basilica, you will be able to hear the first Christmas Oratorio written by a Jordanian composer, Tomeh Jbara, who will conduct the Fountain of Love orchestra and the chorus in a performance of this original work.

Other cultural activities are characterized by two seminars: Tuesday, October 18, the Franciscan Monastery of Mount Nebo in collaboration with the Italian Embassy present an archaeological seminar Precious Water, at the University of Amman. In the afternoon, Fr Eugenio Alliata, Professor of Archeology at the Studium Biblicum Franciscanum in Jerusalem, will present to the scientific community the new Memorial of Moses and the latest discoveries.

December 15 (date to be confirmed) a seminar dedicated to the figure of Moses and the history of Mount Nebo, organized jointly by the Royal Institute for Interfaith Dialogue, the Embassy of Italy in Amman and the Franciscan Monastery of Mount Nebo will be presented.

In the program of the celebrations they have also included educational sessions dedicated in the first place to tourist guides (workshop on October 17 presented by P. Eugenio Alliata, the architect Osama Hamdan, and director of final works for the reopening of the Memorial, and mosaicist Franco Sciorilli), and secondly to schools, which may enroll for a guided tour during the month of November. In addition, scheduled guided tours in English and Arabic on October 17 and 18 are open to all.

Following recent new discoveries Fr.. Eugenio Alliata has updated the history of Mount Nebo and the Memorial, retracing the ancient testimonies and illustrating the work of Franciscan archaeologists (Saller, Bagatti, Corbo, Piccirillo, Alliata, Pappalardo) on the current project. While planning to publish a comprehensive guide at a later date, Fr. Alliata has written a brochure for the occasion, one that will be available in the opening days and will be published on the website of the sanctuary www.montenebo.org, where one can also look up a detailed program of events.

The Memorial of Moses on Mount Nebo is the place from where according to the Bible (see Deuteronomy 34), God showed Moses the Holy Land and where the prophet, revered by the three monotheistic religions died. Although according to the same sacred text the place of his burial is unknown, a community of monks settled on Mount Nebo perpetuating the memory of Moses in this place from the fourth to the ninth century. During the 1900s the archaeologists of the Custody of the Holy Land, which in 1932 had acquired ownership of the place, brought to light the ancient monastery, the basilica and its wonderful mosaics. In order to cover and preserve the archaeological site, and at the same time to exhibit the mosaics from the various historical periods, the original covering from the 1960s has been extensively restored and rebuilt, and finally inaugurated in October 2016.