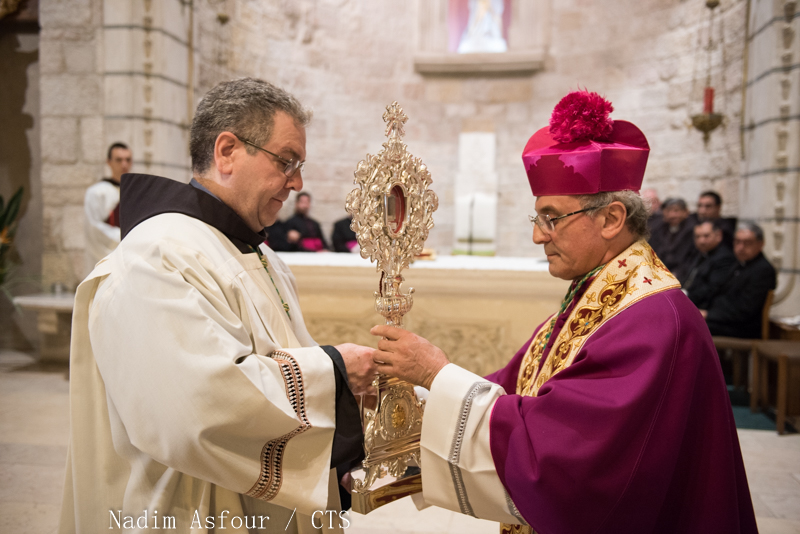 Directly from Santa Maria Maggiore, after careful preparation, the relic of the Holy Crib of Jesus, a gift to the Custody of the Holy Land from Pope Francis, arrived in Jerusalem on Friday 29th November. The celebration of this day, which is already dear to the Franciscans for the celebration of the memory of All the Saints of the Seraphic Order and of the approval of the rule, became a double one.

Another Christmas takes place in the small chapel of “Our Lady of Peace” in the complex of Notre Dame, where Holy Mass was celebrated in the morning. The Apostolic Nuncio to Israel and Cyprus, Apostolic Delegate to Jerusalem and Palestine, His Excellency the Most Reverend Mons. Leopoldo Girelli presided the Holy Mass, concelebrated by the Custosof the Holy Land Fr. Francesco Patton, by the Director of the Notre Dame Centre, Father Juan Solana and by other priests. "In receiving this gift from Pope Francis, with ardent faith, our joy cannot be superficial but must be profound,” Mons. Girelli emphasized during the homily. "The wooden relic directs our gaze to Calvary, marking the unity between the Easter Mystery and Christmas. The mingling of God’s love for the history of men passes through wood, which appears both as the wood of the cross and the wood of the manger." At the end of the celebration of the Eucharist, the pilgrims and Christians had the opportunity to venerate the relic.

In the afternoon, the Franciscan friars went to the Notre Dame Centre for the handing-over ceremony. A hymn was sung inside the chapel, followed by the readings of Christmas Day, culminating in the passage of the Gospel according to Luke which describes the Birth of Jesus (Luke 2, 1-14). It was again Mons. Girelli who commented on it. "Before us we have a precious fragment: caressed by the soft hands of Mary,  by the rough hands of Joseph and which the tiny hands of the divine baby brushed against,” the Nuncio recalled, “may the return to Bethlehem of this piece of holy wood arouse in us the profound desire to be bearers of God. Now it is our hearts that are a manger: the Holy Crib of God made man."

The Apostolic Nuncio then read the letter that Card. StanislaoRylko, Archpriest of the Papal Basilica of Santa Maria Maggiore, sent to the Custos of the Holy Land, Fr. Francesco Patton. In the letter, the Cardinal historically reconstructed the importance of the gift of the relic of the Holy Crib  for the Basilica of which he is archpriest, called over time ”Bethlehem of Rome": Pope Gregory III made it a real Shrine, not only of the Mother of God but also of the Nativity of Our Lord Jesus Christ. "Pope Francis accompanies this gift with his blessing,” the letter went on, “and with the fervid wish  that the veneration of this illustrious relic can open the hearts of many men and women, adults and youngsters, the elderly and children, to receive with a renewed fervour of faith and love the mystery that changed the course of history. The Holy Father wishes, in particular, that the message of peace announced by the angels on the night of Christmas to the men loved by God, which for two thousand years has rung out from Bethlehem, brings the gift of peace and reconciliation which our world needs more and more."

After the reading there was the actual moment when the Relic was handed over to the Custos Father who, after having accepted the gift, gave thanks in his name, in the name of the Custody and all the faithful and the pilgrims to the Holy Land. "Today is a day of great celebration also because we have been given a fragment of that Holy Crib which recalls the Mystery of the Incarnation, so dear to St Francis and the foundation and model of our very vocation,” the Custos said. "Your Most Reverend Excellency,” he added, referring to the Nuncio Girelli, “please convey to the Holy Father Pope Francis all our gratitude for this gift. Assure him that we will not limit this Relic to the Custody, but we will ensure that it represents the outgoing Church and that it brings the joy of the Gospel, peregrinating between the different Christian communities of the Holy Land to rekindle faith in Jesus."

At the end, the acceptance report was read and signed and a procession, accompanied by the singing of the litanies, reached the church of St Saviour in the Franciscan convent of the same name. In the church, after the incensement of the relic, there was a prayer with the song that is performed at the manger during the daily procession at the Basilica of the Nativity in Bethlehem. This was followed by the Solemn Vespers of the feast of All Saints of the Seraphic Order, which marked the end of the celebration of the Relic being handed over.

"This fragment of the Holy Crib of Our Lord Jesus, which is given to us today, can become a summons for us and – though us – for our Christians and for millions of pilgrims, to bend our knees before the Son of God who was humiliated and made himself small for his love of us,” concluded the Custos. "It is a summons to embrace the omnipotence of God which appears in the helplessness of the Baby of Bethlehem and will appear even more powerfully in the apparent impotence of the Crucifix.” 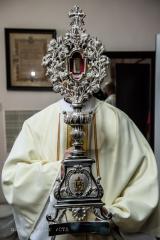 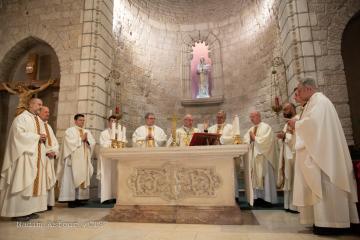 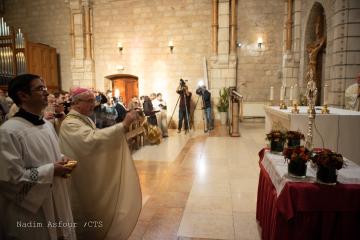 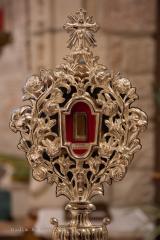 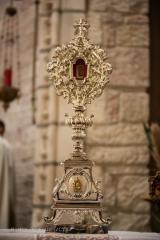 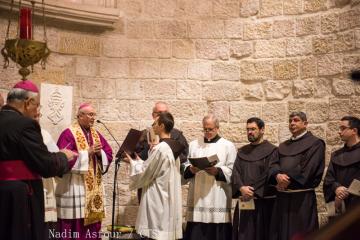 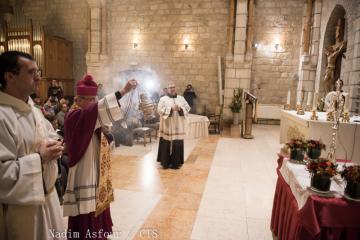 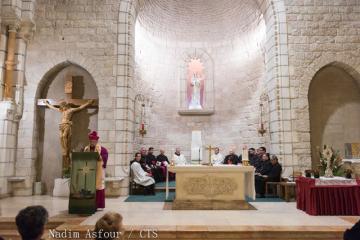 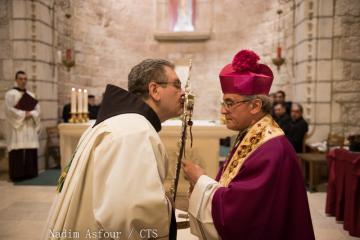 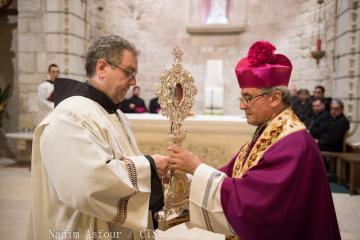 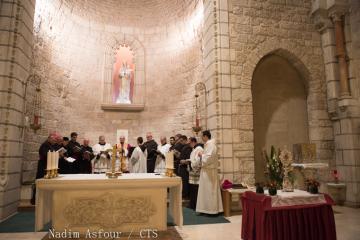 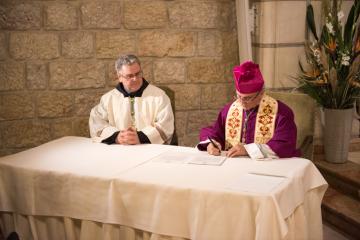 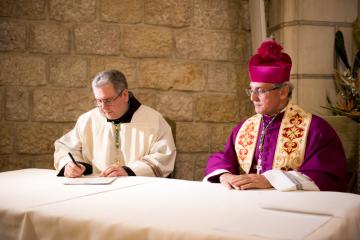 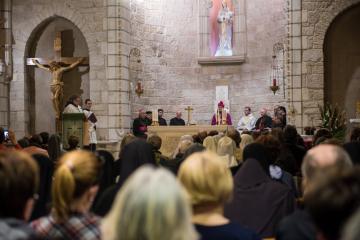 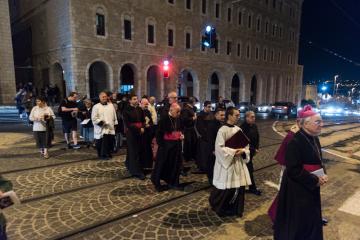 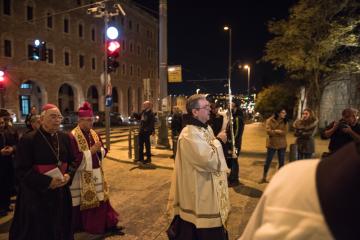 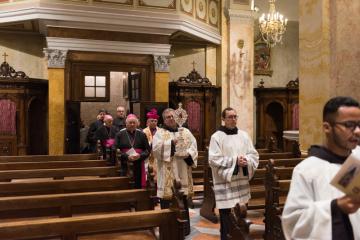 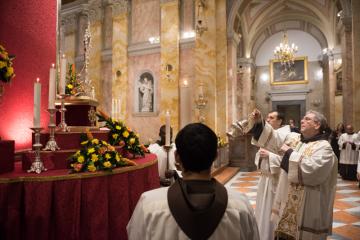 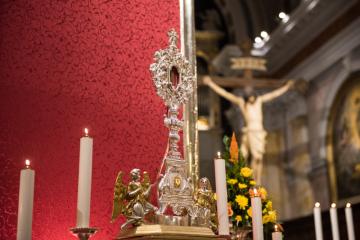 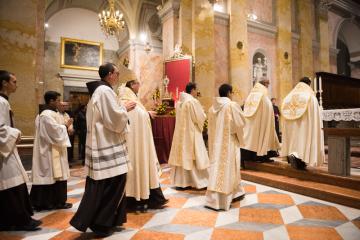 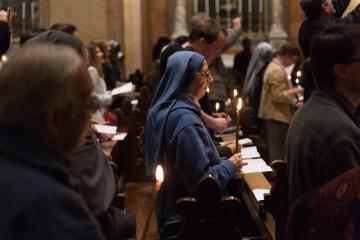 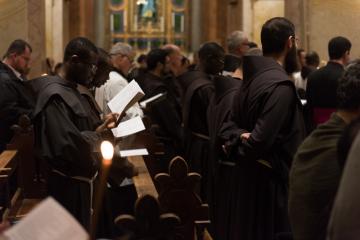