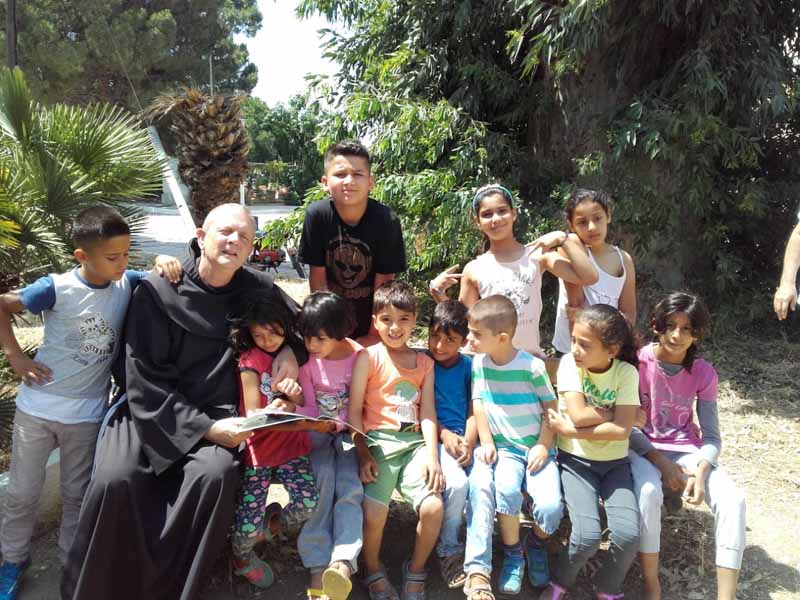 Letter from Fr. John Luke Gregory, delegate of the Custos in Rhodes

We seem to hear very little now of the refugees who continue to make the dangerous crossing from Turkey to the Greek islands of the Dodecanese. It almost appears to be a forgotten phenomenon, but believe me; they continue to arrive: Syrians, Iraqis, and Iranians, Afghanistan, Kurds and others. Amongst them are many children. The Syrian refugees are housed in centre known as a “hotspot” and the non- Syrians separately.

On Saturday 26th May, the Italian Ambassador Luigi Efissio Marras visited the island of Leros. He came to lay a wreath at the War Memorial commemorating the many war dead, but also to open the new Italian Cultural Centre. There are two Italians who live on the island and work tirelessly with zeal and enthusiasm to bring such events to fruition, Enzo Petrokaravo and his wife Cettina. They really are a wonderful couple!

This sunny day we were waiting for the ceremony to begin. The war memorial is in the old Italian capital of the island: Portolago, named after a former and very benevolent governor, Mario Lago. It is now called Lakki. The memorial is in a small garden near to the old Italian Caserma.
I was sat on a bench in this small garden with an Italian lady. Two children approached me and asked in Arabic if I was the imam. I smiled and replied in Arabic that I was the Catholic priest. They wanted to know all about that and what were the big beads (Franciscan Crown) I was wearing and what the cross suspended at the end and who was hung on it. News soon spread that I spoke a little Arabic and within a few minutes we were surrounded by children, all very happy to share their stories, then to introduce their brothers sisters, mothers and fathers if they had them. Children are children and the horrors of the past and the horrific scenes they have witnessed and lived through in their short lives are easily forgotten in the joy of the moment.

A father of one of the children gave some coins to buy some cheap biscuits. They rushed back and opened them. It was no surprise to me, knowing the importance of middle eastern hospitality, and their natural need to share, opened their treasured biscuits and offered them to all present. I was so moved by this generous and spontaneous gesture. This munificent and magnanimous expression of giving is part of their DNA. They have so little and yet what little they have they share with others automatically. I thought about this and thanked God that we are able to help the refugees and the poor in these islands following the example of St. Francis who loved the poor above all things in the steps of his Lord and Master. What an example these children are. I would suggest they have much to teach the more wealthy of this world. How true ring those words of our Lord: Suffer little children to come unto me for theirs is the Kingdom of God!