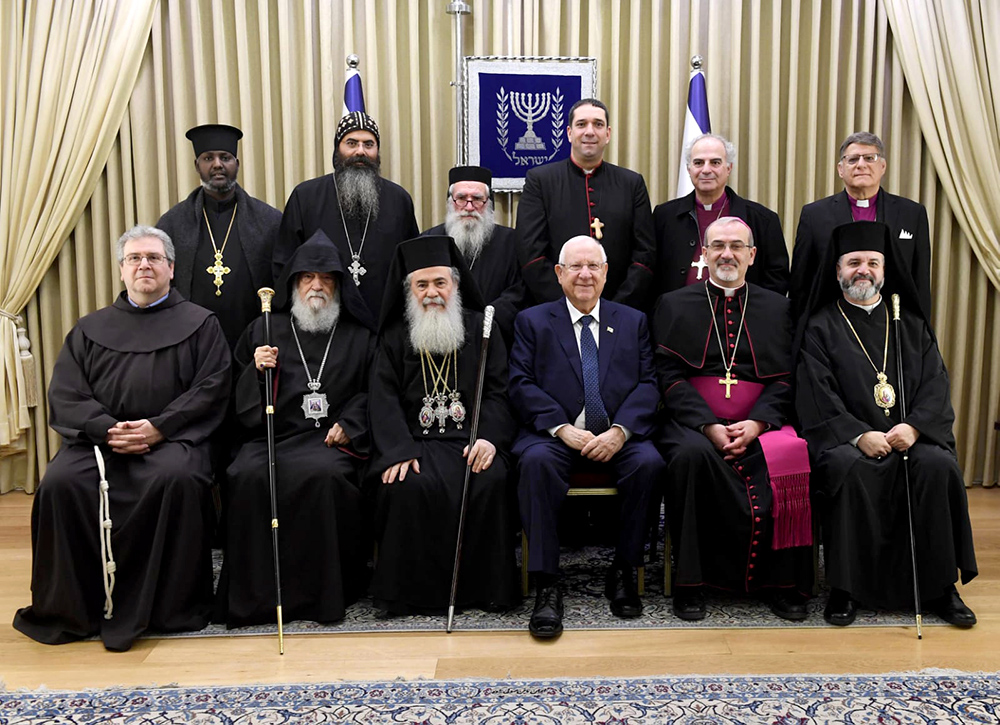 On 30th December, the President of the State of Israel, Reuven Rivlin, hosted a meeting with the heads of the Churches of the Holy Land at his residence, to greet them and convey his wishes for the recent celebrations and those to come.

After having received them, the guests and the President went into the conference room for the speeches. The first to take the floor was the host. In his speech, President Rivlin spoke of the beauty of Jerusalem in this festive period, when Christians and Jews celebrate their respective festivities linked to the celebration of the light that comes from God: Christmas and Hanukkah. Rivlin emphasized the central place of the shrines in the last two years, which were visited by more than 900,000 tourists in 2018, estimating their considerable growth for 2019 as well. He then recalled the problem of antisemitism, 75 years after the liberation of the concentration camp of Auschwitz and the celebrations that will be held at YadVa Shem. "Ask for peace for Jerusalem,” he said, quoting Psalm 122, 6-7, after having condemned every form of violence due to religion, "May those who love you be secure, May there be peace within your walls, and security within your citadels,” hoping that Jerusalem can be a model of peace and coexistence between religions. The President concluded his speech inviting each one to take initiatives and be an active part of this coexistence.

The speeches continued, with some Christmas songs in Arabic being performed in the intervals. Rav. AryehMakhlouf Deri, the Minister for Internal Affairs of the state of Israel introduced his speech with the words, “My house will be called a house of prayer for all nations (Is 56, 7)," hoping that Jerusalem becomes increasingly open to the different religions that live there. Rav. Deri then continued his speech recalling the sad events of 29th December in Monsey, 30 miles from New York City, on the seventh day of Hanukkah, underlining the importance of the fight against antisemitism, spreading even today. In conclusion, the Minister Deri praised the work of citizens who have embellished and transformed the city of Jerusalem in favor of dialogue and solidarity between religions: "Jerusalem,” he said, “is one of the most beautiful cities in the world."

The third speaker was Theophilus III, the current Greek Orthodox Patriarch of Jerusalem, who spoke in the representation of all the Christian religious leaders. Theophilus III started by expressing his gratitude both for the support that the Israeli authorities offer the Christian communities and for the work that has been done in recent years, in favor of religious tolerance and the promotion of multiculturalism. The Greek Patriarch mentioned as an example of the work done in collaboration at the site of the Baptism, which will become an oasis of peace and welcome for everyone.

The meeting ended with a Christmas song sung in English and Arabic before the goodbyes.

Open Day at the Terra Sancta Museum: a hand extended to the Palestinian world of architecture and engineering