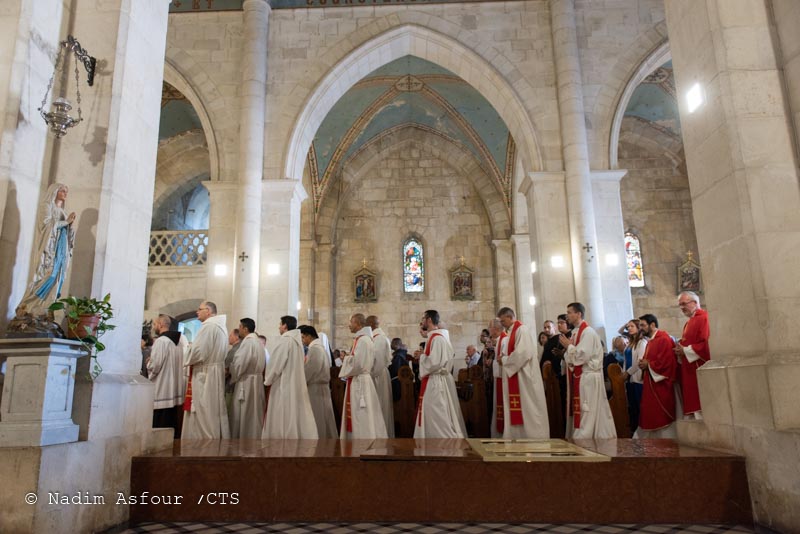 Guided by the Gospel of Luke, September 30 was an important day at the Shrine in Emmaus: the feast of Saints Cleophas and Simeon.

The Shrine of Emmaus Qubeibeh was purchased in 1861 by the Marchioness and servant of God Paolina de Nicolay and it was then donated to the Custody of the Holy Land. Since then, several excavations have led to the discovery of the remains of the Crusader-era basilica with the “house of Cleophas" and of some houses that were part of the medieval village that were in a line along the street. About a year ago, the Franciscan fraternity became interobediential, and is currently in fact composed of two friars minors and two conventuals.

“The mass on the Monday of the Angel differs a lot from the mass for the feast of the Shrine,” said Br. Salem, the superior of the monastery who has lived there for five years. “The first focuses on Jesus’ journey from Jerusalem to Emmaus immediately after Resurrection: in fact, it is Jesus who is recognized in the extraordinary event of the breaking of the bread and that day is a call for many pilgrims. However, today we celebrate the hosts, and we are in the place where they lived. So, we remember their presence, their feast day and their welcoming nature, as is recounted in the famous biblical episode. We also remember how they welcomed Jesus. Today we feel compelled to welcome anyone who comes to celebrate with us.”

The homily by the Custos of the Holy Land, Fr. Francesco Patton, initially described the disappointment of the two disciples, a feeling that is part of human nature. They were profoundly disappointed not by the events but by Jesus himself, who had raised in them many feelings of new hope but which by then had been crucified and who had most importantly not been found inside the tomb. “If we want to make the journey of the disciples in Emmaus, we must have the courage to come out and and be clear with Jesus, telling him about our frustrations and feelings of disappointment.”

Fr. Patton recalled that God always responds to mankind’s requests and does so in a direct and strong way. The answer to the feeling of disappointment that everyone can relate to can be found within Jesus’ request not to adapt to the mentality of the world but to follow the Word of God, especially at times when we might feel some disappointment. “Every time Jesus tells us to look toward Easter,” the Father Custos said, “he tries to explain to us that this is the key to reading his whole life, mission, all of revelation and all of history but it is also the the key to understanding our life and our vocation, and the key to understanding the life of the Church on its journey through history.”

The suggestion of the Custos was to “let us be taught by saints Cleophas and Simeon,” so as to obtain the grace of interpreting our disappointments in light of the paschal mystery, recognizing God all of the time in the breaking of the bread. “[My] wish, he concluded,” “is that we may no longer be as fugitives, disappointed and complaining” but with Christ, who is alive and walks with us first.

Feast of the Ascension celebrated in Jerusalem

Easter behind closed doors... and in live streaming