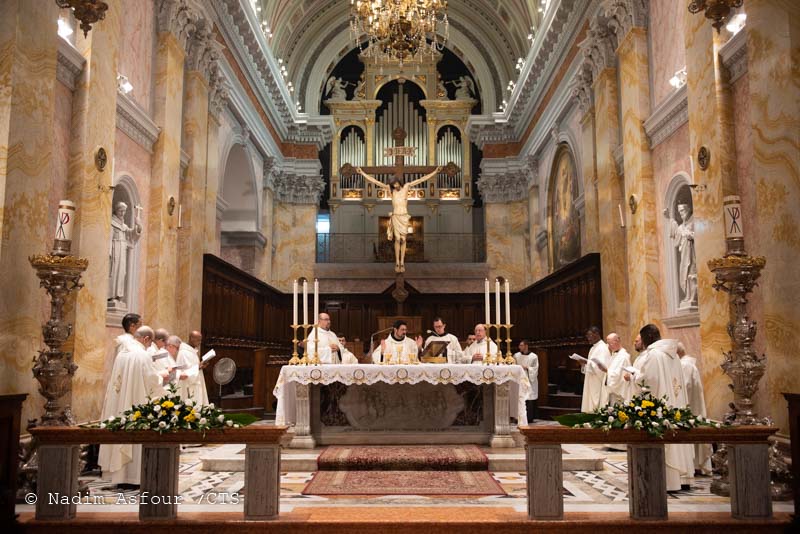 The Spanish diplomatic, civil and religious community met on October 14 at the church of the Monastery of St. Savior in Jerusalem, for the customary Eucharistic Celebration in memory of Our Lady of Pilar, Spain’s national holiday.

The tradition, which was formalized in 1994 with a treaty between the Holy See and Spain, has deep roots. For at least seven centuries, Spain has had a special relationship with the Holy Land and the friars of the Custody. Like the other Catholic nations that support the Franciscans in this land, the secular presence of Spain finds its origin in its love for Jesus and the places recall the events of his life. Br. Marcelo Cichinelli, the guardian at St. Savior’s and Spanish-speaking the Discreet who presided over the celebration, recalled in closing that Spain has been historically known for events such as the help it offered in acquiring the holy places, like Bethlehem, the Holy Sepulcher and Mary’s Tomb, which later became the property of the Greek Orthodox starting in 1751, as well as different actions in favor of the presence of the Friars Minor in the Holy places.

“This is a beautiful tradition that we as Spaniards are proud of,” said the Consul of Spain, Rafael Matos González de Careaga, who followed the Eucharistic celebration alongside his wife from the front row. “Today we celebrate our national holiday and this tradition is a reflection of the splendid relationship existing between Spain and the Custody but also between Spain and the Holy See.”

During the Homily, Fr. Aquilino Castillo Álvarez, the custodial vocations director, joyfully highlighted the presence of the Consul and of the Spanish Diplomatic Corps of the Consulate of Jerusalem and the Embassy of Tel Aviv, as well as of members of the Spanish Civil Guard and all of Spanish men and women religious and laity present. “Their presence on this occasion,” said Fr. Aquilino, “reminds us that we are a people with a tradition based on a faith that becomes a pilar fuerte, a strong column, of our culture not to be forgotten because Faith and our entrustment to the Holy Church, who is both Mother and Teacher, have been underscoring our Spanishness for centuries.”

“We want to continue to be present,” said the Spanish Consul, recalling the presence and work of the Obra Pia de Los Santos Lugares for donations to various organizations in the Holy Land and support for the various Spanish religious communities present. “We celebrate the memory of the past, awaiting for what good will come from this wonderful relationship,” concluded Gonzales de Careaga.