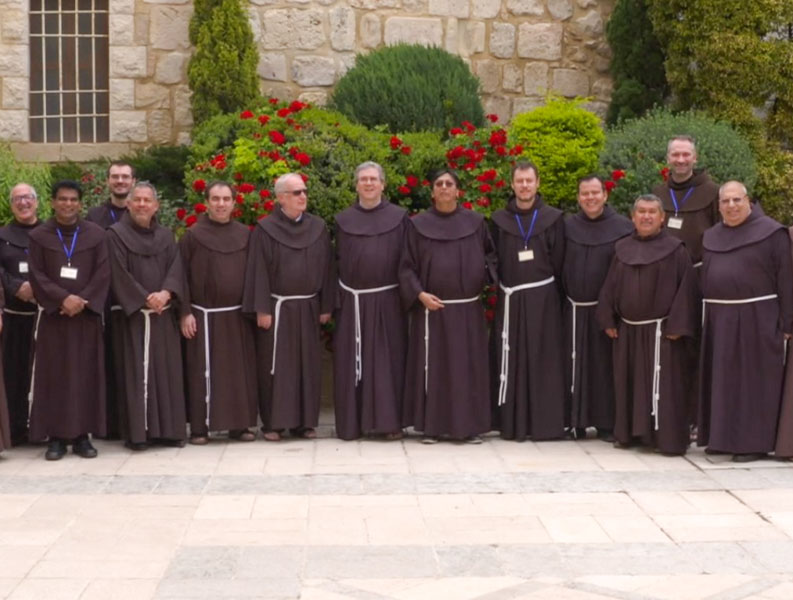 Representatives of the fourteen conferences of the Order of Friars Minor met in Jerusalem to reflect on challenges in evangeliation to today and on prospects for the future.

From all over the world, Franciscans who make up the International Council for Mission and Evangelization gathered in Jerusalem.

Reprenentatives of the fourteen conferences of the order met in Jerusalem between April 22nd to the 27th to become aware of differing realities and to reflect on challenges facing evangelization today, as well as to consider prospects for the future.

“Together we have realized that although we know something of reality, most of us are in parishes where we must nevertheless work hard in fostering ecumenical dialogue.”

They then considered a need to return to action stemming from contemplation.

Above all, we must consider the spirit which each of us has. A fundamental aspect lies in fraternal life as an example of evangeliztion,exactly where we are in ourcollective life as friars on the edge of a world in which we live and work.

A day was also dedicated to awareness of the Franciscan mission in the Holy Land.

Frair ABDEL – MASIH FAHIM, ofm
Director of the Terra Santa School in Ramleh
Acceptance of all those involved in mission and evangelization in this world should center on proclaiming the same 2 000-year-old news: that Christ is risen, and that he hears us and helps us.

Eight hundred years of Franciscan presence in the Holy Land, and the lessons that evangeliation can teach us today, was the theme presented by Friar Francesco Patton. Many of the topics covered by the Custos of the Holy Land: being an international community in the midst of the realities of Christians in the Middle East; evalgelization through a pareyful presence at various shrines; experience of faith, and marytrdom which has accompanied eight centuries of life here, a fact which still chatacterizes it, relflected in the witness of Christians throughout the area.

“This is an occasion on which to reflect, first in Jerusalem, then, approaching the plenary council of the Order in June when the this reflection will have matured. Of course ours is an order which has always been focussed on mission and evangelization, a so-called pearl, still has something to say to us today.”

Among the many matters discussed were various examples of modern evangelization. At first, knowledge of the Holy Land was spread by commisioners, and only later through books and magazines. In his preentation Friar Alessandro Caspoli, Communication Director of the Custoday of the Holy Land, spoke of the 90th anniverday of the Holy land Magazine.

“It could not have been otherwise in this history,” said Friar Dobromir Jasztal, Vicar of the Custody. “Ever since the arrival of the first friars 800 years ago,” he said, “we have followed the signs of the times.” He also spoke of the Christian Media Center as an example of modern evangelization.

Finally, members of the council took part in the Way of the Cross, in which pilgrims from all over the world participate, thereby making of it a universal prayer.