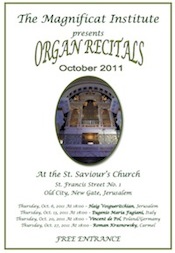 Every Thursday at 6.00 p.m.
Inaugural concert 6th October with Haig Aram Vosgueritchian,
former student of the Magnificat Institute of Jerusalem

The prestigious “Rieger” organ of the church of St. Saviour in Jerusalem in this period is very pleased: it knows that, as every October, expert hands will be drawing marvellous sounds from its registered and its pipes. Every Thursday in October, the annual season of “Organ Concerts”, organized by the Magnificat Institute of Music of the Custody of the Holy Land will be held in the church of St. Saviour in Jerusalem.

The characteristic of this event is to associate concert performers of international experience with young musicians at the dawn of their career. With great satisfaction and legitimate pride, the inaugural concert on Thursday 6th October will be performed by Haig Aram Vosgueritchian, who was born in Jerusalem and who grew up, musically speaking, at the Magnificat. Haig began to study the piano and organ with Father Armando Pierucci, the founder and director of the Magnificat and organist of the Holy Sepulchre, before going on to advanced studies at the Conservatoire in Vicenza where on 4th July this year he was awarded the Academic Diploma with top marks. Maestro Vosgueritchian is currently the organist and director of the choir of the Basilica of the Annunciation in Nazareth and teaches music at the Magnificat and the Studium Biblicum Franciscanum.

He is the first example of how the project of Father Pierucci and of the Custody of the Holy Land can be realized, which at first seemed a risky wager: creating a school of music in the Old City of Jerusalem at the service of the local community (the Magnificat) to train professionals who could then make a living from their music. What is problematic in the West, is possible in the Holy Land: investing in education, music and culture is a virtuous operation that generates not only a return in terms of greater quality of social life but also a return in economic terms for people.

For the second concern on Thursday 13th October, Eugenio Maria Fagiani will be arriving from Italy. Fagiani performs regularly in Europe, the USA and Canada and is regularly invited to teach and give lectures and master classes both of interpretation and improvisation at prestigious musical institutions in Europe and North America, such as Trinity Hall (Cambridge University, UK) and the Royal Canadian College of Organists of Toronto. Since 2008, he has been the Additional Organist of the Franciscan Sanctuary of La Verna, Arezzo. In 2010 he also became the Organist of the Prepositural Church of St. Amrose, in Merate, Lecco, and since then he has also collaborated as organist with the “G. Verdi” Symphonic Orchestra of Milan, with which he recently performed Benjamin Britten’s “War Requiem” at La Scala in Milan. As a composer, his works include pieces for chamber groups, for organ and for orchestra.

Vincent De Pol is the third organist of the season and will be performing on Thursday 20th October. His real name is Zygmund Strzep, but considering that his name is unpronounceable he prefers to appear under the stage name of Vincent De Pol. De Pol –his name says so – is Polish but he now lives in Germany and is considered one of the best German organists. His musical background includes studies at the “Fryderyk Chopin” Academy of Music in Warsaw and at the “Hochschule für Musik und Theater” of Hamburg. His acclaimed concert performances take him around the world every year. He has appeared at famous international organ festivals and has made radio and TV recordings and recorded CDs in Africa, Australia, Europe, Central and South America, New Zealand, Israel, Canada and the U.S.A.

The conclusive concert on Thursday 27th October will be given – like last year – by Roman Krasnovsky. Krasnovsky has lived in Israel since 1990 when he immigrated from the Ukraine, where he was born in 1955. He teaches piano at the Conservatoire of Carmiel after having taught at the Rubin Academy in Jerusalem. He started to study the organ when his career as a pianist and harpsichordist was already well established and he accompanied the word-famous violinist Viktoria Mullova. Krasnovsky performs on the best organs of the Netherlands, Switzerland, Italy, Germany, England, Belgium and the USA; and also at St. Saviour where – as many say – there is one of the best organ in the Holy Land.