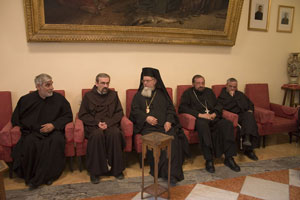 The visit of Mgr. Chakour, Melchite Archbishop of Galilee, to Fra Custos, Wednesday 15th March: Mgr. Chakour, the recently elected and enthroned Archbishop of the Melchite Church in Galilee, introduced himself to the Custody of the Holy Land. Mgr. Chakour is no stranger either to Fra Pierbattista Pizzaballa the Custos, who welcomed him, or to the Custody. But in the Holy Land it is the practice that a newly elected Bishop visits the heads of the local Churches.

The Custody is not a church within the Catholic Church, but its century old presence in the land as well as the mandate received from successive Popes make of it an incontestable institution.

A parish priest for many years in Galilee, Mgr. Chakour rightly underlined, as bishop, the importance of the presence of the Custody not only as responsible of preserving and animating the Holy Places, but also because of its spiritual charisma. “We love the Franciscans and their spirituality”, the prelate declared. “Your material help is important, but your spiritual help is much more important. We need this to be able to give a new impulse to the spirit of prayer and poverty to our faithful who thirst for spiritual direction.”

Fra Pizzaballa renewed the Custody’s intention of working shoulder to shoulder with the other churches as has been the case for centuries. “We hope to co-operate with you in the service given to the Christians of the Holy Land, further improving our relationship with your Church. We have much to learn from you and your experience of life amongst the Israeli Christians”, said Fra Pierbattista Pizzaballa.

Mgr. Chakour was accompanied by a small delegation among who were the Curate of Maghar, nominated as vicar general, and the parish priests of Jaffa, Nazareth, and Reneh. On his part the Custos was accompanied by the Custodial Vicar, Fra Artemius Vitores, Fra Atanasius Macora, responsible for the status quo as well as a few friars, among whom Fra Gabriel Baireyr, a Melchite to whom Mgr. Chakour paid homage.

Before bidding farewell the Custos and Mgr. Chakour examined together the state of tension that continues to be present within the Christian community in Nazareth following the recent disorders that happened around the Basilica of the Annunciation.