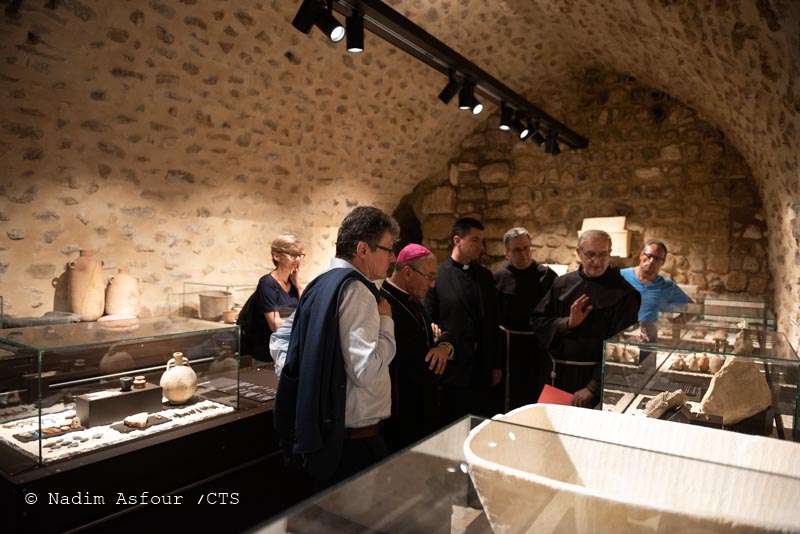 The new archaeological section of the Terra Sancta Museum opened its doors to visitors from all over the world. This occurred on June 27 in Jerusalem, in the presence of the Custos of the Holy Land, at the headquarters of the Flagellation Monastery on the Via Dolorosa. After opening the multimedia section in 2016, the museum now has opened its second section, linked to the archaeological finds collected and preserved by the friars over the centuries.

“Why did we delve into the project of a museum of the Holy Land in Jerusalem?” said the Custos, Fr. Patton, during the opening. In light of our predecessors and as friars of St. Francis, today we want to look for new paths that make sense for our time, to proclaim the Word of God, to promote values and the Christian presence in the Holy Land, to preserve its culture and history, to make it such that culture itself becomes a way through which to cultivate dialogue with the other faiths present in the Holy Land, and in this way, we make our own contribution to building a peaceful world.”

In the courtyard of the Monastery of the Flagellation, Sara Cibin, head of the Terra Sancta Museum project, opened the ceremony. Each speech was interspersed with a song, performed by students from the Magnificat, the music school belonging to the Custody of the Holy Land.

“With this opening, we want to offer a preview of the section dedicated to the political institutions and to daily life [here] from the time of the New Testament to the first experiences of monasticism,” explained Br. Eugenio Alliata, director of the Terra Sancta Museum. “The friars have always taken care of the Holy Land from a spiritual and material perspective,” he continued. “But they are not only guardians of the stones, but also of the spirit of the Holy Land.”
Dr. Gyozo Voros, an archaeologist who collaborates with the Studium Biblicum and the excavation of the Macheronte site, then talked about the life of Br. Virgilio Corbo, a famous Franciscan archaeologist, who worked on many excavation campaigns, from which most of the findings displayed in the exhibit come.

The exhibit rooms open to the public are only a part of those planned for this archaeological section. This is the second part of the future visit itinerary for the Archaeological Collections of the TSM, which will host an opening night, in which the biblical sites excavated by the Franciscan friars and in which a third area for specially themed collections will be featured. For the first time, the museum itinerary now allows visitors to access a series of ancient rooms recovered and restored for the occasion: a Byzantine-era cistern, a second older one connected to rooms of a Crusader-era house and finally a splendid courtyard with its adjacent rooms from the Mamluk time.

The architectural restoration project of the ancient spaces used for the museum was curated by the GTRF Tortelli Frassoni Architetti Associati studio, as well as the museum and exhibit project. As the architect Giovanni Tortelli explained, “With this first opening, the new museum unveils rigorous, dry exhibit language, devoid of empty stage rhetoric, and certainly includes straightforward contemporaneity and functionality (it could not be any other way).”

“Tradition and innovation are perfectly co-present in a coherent design,” said Gabriele Allevi, the scientific curator for the museum, along with Fr. Eugenio Alliata. The great archaeological adventure of the Studium Biblicum Franciscanum is presented to the public with the latest museum terminology.” To facilitate the use of the exhibit, there will also be an app available in several languages.

The renovation of the Terra Sancta Museum continues, which will cover an exhibit area of about 2,573 square meters. Three planned sections—Multimedia, Archaeological and Historical— will be split into two existing spaces (the Flagellation Monastery and St. Savior’s Monastery). Currently, a scientific excellence committee is working on the historical section of the museum, which has projected that it will open in 2020.