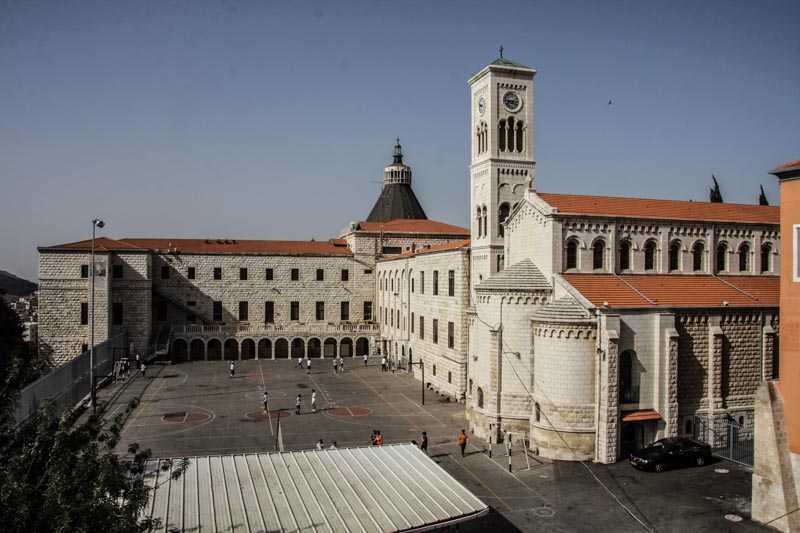 The Custody's website continues its series on the schools of the Custody. After Acre, comes Nazareth.
The Terra Sancta College in Nazareth is located in the largest city in the Northern District of Israel. Its population is composed of young Christian and Muslim Israeli citizens, “1948 Palestinians.”
Brother Amjad Sabbara, OFM, pastor of the Basilica of the Annunciation, the largest parish in the diocese, is also the director of the Terra Sancta College in Nazareth. In his point of view, Christian schools have a specific mission: “Our students must draw on their Arab, Palestinian and Christian roots in order to preserve their identity while living in Israel.”
“The main vocation of the school,” continued the friar, “is to support the most vulnerable students. This is true even if that vulnerability is financial or social in nature or even the result of poor pedagogy.” The Terra Santa School stands out from the other 13 schools in the city in welcoming students of all origins, offering the best possible education to everyone, according to each student's ability, so that they may contribute to society.
“In 2000, the government approved the construction of a large mosque on the property of the Waqf, the Islamic authority, located in front of the Basilica, a project that had been stopped two years later. The construction site brought about the protests of the population and of local Christian leaders and it created a real tension between the two communities. For ten years, appeasement efforts have been made, and the sheikhs and Franciscans friars have worked throughout the years to rebuild trust between Arab Christians and Muslims in Nazareth. At the Terra Sancta College, efforts are focused on dialogue and community reconciliation. “We are working on Islamic-Christian dialogue with youth groups outside and even within the school. We exchange ideas on coexistence and mutual respect, building on the teachings of the Gospel and the Qur'an.”
Christian schools educate 30,000 young people in Israel and are ranked among the best in the country. However, they rarely receive even 70 percent of average grant amounts per student while the Jewish government schools can receive even more than 100 percent. Making the situation worse, added regulations could limit the financial contributions of parents in the future. These Christian institutions that enroll Christian and Muslim Israeli citizens are far from being on an equal footing with the Jewish government schools and they have been seeing their resources dry up in the last five years.

“We currently have two major projects, summarized the friar, the first is academic: support for struggling students through programs tailored to their needs; the second is material since the school seeks to invest in modern equipment. In addition, a number of existing activities can be added to the list: a student exchange program with an Australian school, a program relating to the issue of identity with the participation of a Jewish school, and newly introduced Italian courses that culminate in an annual trip to Italy.
“With the participation of parishioners we created 'the school of the Child Jesus,' a catechism for children, the Franciscan club and a sports club for teenagers, the '18-25 club' for young adults, and the scouts. These clubs bring together about 670 young people, noushkor Allah, praise be to God!” he exlaimed.
Doubly a minority, the 1948 Palestinian Christians sometimes have the feeling of being foreigners in their own country. “Despite our small presence, we still have an important role to play. A vision and plan for the future are the keys for an effective investment of our skills while being rooted in our Christianity, our homeland, and being good citizens.”
In Nazareth, concluded Brother Amjad, as elsewhere, “we must accept others as they are, take into consideration their beliefs and respect them. Everyone can and should contribute to the spirit of justice and respect because true love is grounded in respect and esteem for others.”


Acre: the caravanserai that became a school

Haifa: the Italian school of the Carmelites is now Franciscan

Terra Santa School in Jaffa: Arab students at the heart of Israeli society

Ramla, an isolated Christian community that is open to the world