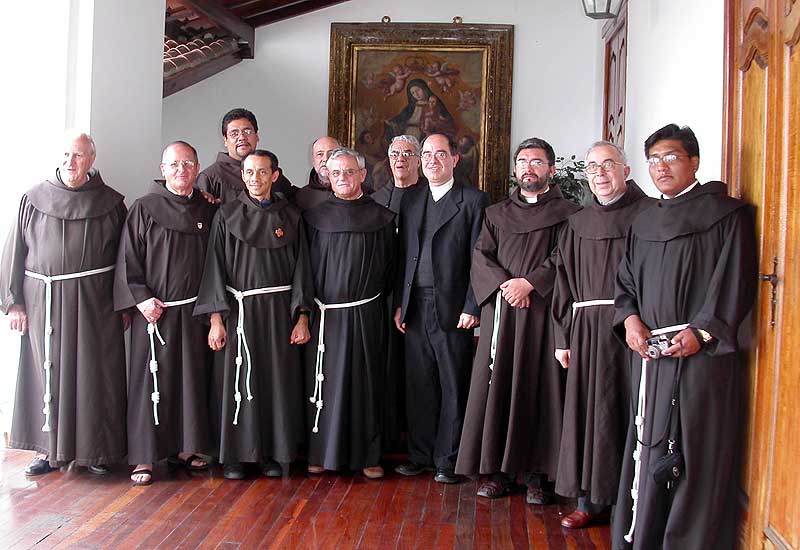 According to the words of Pope John Paul II, the Holy See entrusted the Custody to the Franciscans in 1342, in consideration of the fact that the sons of Saint Francis are a gift of Providence to the Church since their charisma, with its message of peace and goodness, is the most adept to interpret in a “genuinely evangelical” manner the desire of all Christians to “preserve the places where our Christian roots are to be found.” Convinced of the ecclesial service of the Franciscans, the Church never stops supporting them at the religious as well as at the economic, social and political levels. A tangible fruit of this support is the creation, by Pope Martin V, of the “procurators” or “commissioners of the Holy Land” a figure that, according to what Pope Paul VI affirms in his 1974 Apostolic Exhortation Nobis in Animo (on the needs of the Church in the Holy Land), continues to be “still valid and functional”. The Franciscan Order, in its Constitution and Statutes, define the role of the Commissioners of the Holy Land, the brothers who are at the service of this Franciscan mission that is defined as “the pearl of the missions” of the Order. The Commissariats of the Holy Land are official representations of the Custody in various countries. Today the network of support to the Custody is made up of 69 Commissariats and 10 vice-Commissariats scattered around the world.

The Custody of the Holy Land has been able to survive thanks to its international organization (Friars from all nations are ever present), the constant support of the Franciscan Order through the Commissioners pertaining to all the Provinces in the world and especially because of the love St. Francis and his sons harbour for the Holy Land. This survival is a reality since the Commissioners provide for the upkeep of whosoever offers his services in favour of the Custody. This is the only way of defending the Holy Places and carry out both the missionary action and the socio-pastoral works of the Custody.

The activity of the Commissioners is not restricted to the economic aspect: in the first place, they have the job of making Christians the world over aware of their activity in order to keep alive the interest and attention towards the Holy Land, particularly through organizing Christian pilgrimages.

From this point of view their mandate is essentially apostolic-pastoral. The Commissioners are the link between the Christians around the world and the Custody of the Holy Land in its mission of protecting the Holy Places as well as the Christians who live in the Land of the Lord.

The International Congress of Commissioners of the Holy Land will be held between the 19th and 25h November 2006 in Jerusalem. The Congress will reflect on the character of the Commissioner of the Holy Land in the XXI century, keeping in mind the way undertaken by the Franciscan Order in the last years within the wider context of the VII century of activity of the order. This is an event of utmost importance for the Holy Land.

To kick off the preparations, Fra Antonio Vitores, Custodial Vicar, has met a number of Latin American Commissioners of the Holy Land in Caracas. The meeting was held at the Franciscan convent of Christ the King from the 1st to the 5th February. Present for the meeting were the Commissioners of Argentina, Fra Gonzalo Zervino, Ecuador, Fra Néstor Bustos, Bolivia, Fra. Félix Apaza (Vice-Commissioner), Perú, Fra Lucas Hernando, Venezuela, Fra Alexander Pinto, Columbia, Fra Augusto Duque, two of the four Mexican Commissioners (from the provinces of Jalisco, Fra Maximiliano M. Muñoz, and from Michoacán, Fra Elifaleth J. Jiménez), together with the Commissioner of the Holy Land from the province of Madrid, Spain Fra Emérito Merino, who represented the Spanish Commissioners. More Commissioners were unable to attend for various reasons. Their attendance would have further enriched this gathering. During the meeting, after a wide-ranging presentation dealing with the situation of the Custody, its mission and projects prepared by Fra Artemio, an analysis of some proposed themes for the November Congress were analyzed; the figure of the Commissioner, his relationship with the Order, the bishops, the Custody; the pastoral and divulging mission of the Commissioner as well as other themes of great interest. The meeting was a very positive experience for all.

Fra Artemio took advantage of his stay in Latin America to illustrate the Custody’s mission to a very large number of young Columbian Franciscans and to talk about the needs of the Holy Land on Columbian television. The love for the Holy Places and the desire of going to them on pilgrimage nurtured by the Christians from this part of the world is incredible! Also, remnants of the Holy Land are quite abundant in these countries. Just a couple of examples suffice: the image of Baby Jesus that was in the Basilica of the Nativity in Bethlehem for 20 years and which has been housed in the Church of St. Francis since 1620; the first coins minted in Bogotá, around 1600, that bear the Cross of the Holy Land impressed on one face. Visiting these countries one becomes aware of the immense work carried out by the Franciscans of the Holy Land throughout history.