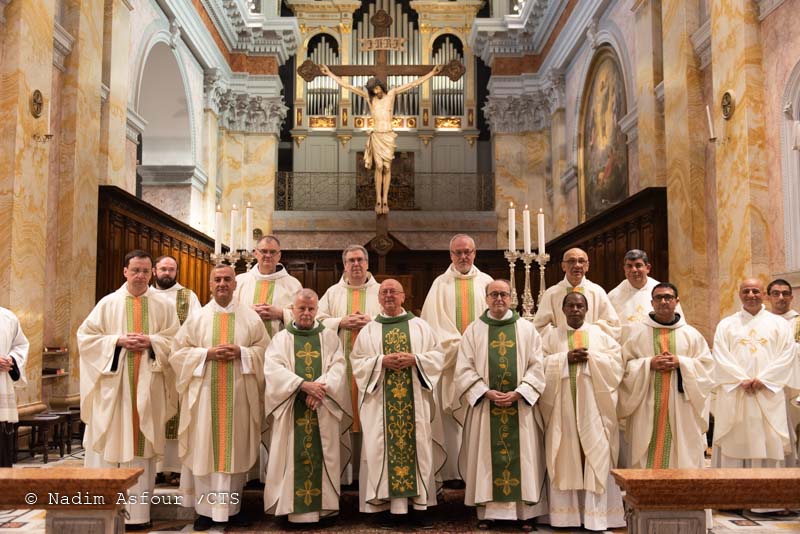 One of the celebrations that precede the end of the Intermediate Chapter of the Custody was held on Sunday 14th July. It was that of the Jubilees of the religious professions and priestly ordinations.
There were numerous friars celebrating 25, 50 and 60 years of priestly life or religious life and many friars of the Custodyjoined in this celebration.

The Italian Fr. Giuseppe Ferrari, Delegate for Italy of the Custody of the Holy Land, performs his service in Rome and this year celebrates 50 years of religious life.

What is the most significant event that you have been able to experience in these years?
- My life is a very normal life. I have grown acquiring a determined awareness of myself. Along the way, I have found myself in a reality that I felt was mine, like space where my person with my expectations and my dreams felt good. It is true that my life is full of different experiences of a certain type, but I have never been able to identify a decisive moment which helped me understand that this was the path even along my journey. Perhaps the greatest experience that I live every day is the fact of feeling around me a great welcome by the friars and the people I have around me, it is something which makes me very happy and often I cannot interpret the reason for this. It is also this experience that has given me the drive to carry on in certain situations, despite everything, even little desire. If there is something that has always been important for me it was being immersed in a situation which told me “be part of us.” I have always interpreted this inner experience as an expression of the presence of  the Eternal Father with me.
Probably many things happen in life, I have been in it in a certain way and I am here. But it is definitely not by chance.

In your personal experience, how has Franciscanism changed?
- I start from an experience which was very significant for me: some time ago I lived with brothers in  Emilia Romagna (Italy) and in that circumstance I questioned myself a lot, including with my brothers, about our identity. The answer I gave myself is that often there is the risk that the image that people have of Franciscanism overtakes reality: I think we ought to put ourselves more inside this social reality which generated me and generates my brothers to understand it, support it  and live it, saying what is specifically ours. Certainly, since I was a boy and I had my first encounter with “the friar” the concept of Franciscanism has greatly changed, to the extent that that idea practically no longer exists. What I find hard to perceive today is that those around us often ask us certain things which we would like to be different, often there is esteem and affection by many and also the wish to include Franciscanism in cultural and social projects  of all kinds but there is a tendency to omit a religious  experience and God, in favor of the cultural and social one.

When you entered the Order did you ever expect to make this journey?
- I have never had too many expectations. This great welcome which surrounded me has always acted as a track to understand how to proceed. I have had the chance of having many experiences, ever since I was a very young man, which have gratified me from the human point of view, experiences even of concrete commitment which I would never even have considered but which then I realized that they were times of personal enrichment which did not fall within my expectations.
Mine is a very simple life, definitely beautiful. There have been years full of difficulties. But I have always found myself with a good dose of instruments to cope, so even the crises and the difficulties caused by my temperament or by my limits have never prevented me from going ahead.

Fr. Stéphane Milovitch, from France, is in charge of the Department of Cultural Heritage of the Custody, Deputy Bursar and Deputy Head of Human Resources. He is celebrating 25 years since his religious profession.

What is the most significant event that you have experienced in these years?
- For me, a decisive event in these years in the Custody was when the then Custos, Fr. PierbattistaPizzaballaasked me to become Secretary. At that time I was a friar in formation, who had followed a path of a specific study, first theological and then liturgical. Having performed the service of Secretary was significant for me because it allowed me to get to know the Custody through horizons which, otherwise, I could never have known. I had the chance of having experience of questions which otherwise I would never have been involved in and it was an enriching experience, which has made me immensely proud of the Custody. The more I broadened my horizons, the more I felt in harmony with the context I had chosen. It was a period with many difficulties, but it gave me the fundamental keys of interpretation to understand not only the piece of the Custody I was experiencing but also everything that revolved around it, letting me feel even closer. The second experience is the current one: at the moment I am in charge of the Cultural Heritage. Having the opportunity to come into contact with the historical-artistic part of the  Custody has enabled me to better understand why the history of an object, even small ones, can take you back to the history of its donor and their relationship with the Church, but also with that of the Custody.

According to your personal experience, how has Franciscanism changed?
- For me, the Franciscan life was to be a simple life, but life in the Custody has more stressful aspects which also requires coping with different responsibilities that I would never have thought of. For example, in these years I have produced about 690 books of liturgy related to the shrines. All in all, I believe that the model of life is not the one I would have expected. However, it seems important to me that a Friar Minor can do everything, from working in the garden to looking after the cultural heritage.
I believe that it is important to bear faith to the charisma and to be minor even when situations offer you visibility, you have to do things with simplicity. We have to continue to carry our being Franciscan regardless of the situations. For me, it is important to be a sign in every situation and this is why I find it hard not to wear the habit in everything I do during the day: it reminds me of who I am, in what I believe and what I want to be.

When you entered the Order, would you ever have thought of taking this direction?
- My Franciscan vocation came into being together with my vocation for the Custody. When I was in France, I was in a youth group of the Poor Clares, I was thinking of consecrated life but I had realized that the Franciscans were not for me. Then I did a period of voluntary work in the Holy Land in 1992 and there the Franciscan charisma that I had learned about in France put down deep roots here and this is why I entered the Order in the Custody. I also entered here with the idea of being able to serve the Custody as a guide for pilgrims: I love the Holy Land and the city of Jerusalem and I thought I would have had the chance to share this passion, but I have never done any of that. As is plain to see, I am doing something completely different, but I am offering what I am.

Fr. Frederic Manns, from Franace, is Emeritus Professor of New Testament exegesis at the StudiumBiblicumFranciscanum. He is one of the greatest experts on the relationship between Judaism and Christianity in the early centuries and is celebrating 50 years of priestly life.

What is the most significant event that you have lived through in these years?
- A fundamental experience for me was when we succeeded in having the StudiumBiblicumFranciscanumrecognized as a Faculty of Biblical Studies and Archaeology. When I arrived in the Holy Land, the Flagellation was a faculty of Biblical theology. Nobody believed in it, as they had experienced a number of failed attempts. I tried and I was able to obtain the recognition of the Holy See for our archaeologists and our Biblical school. I am truly grateful to the Lord and to the Custody for this.

In your personal experience, how has Franciscanism changed?
- The world has changed enormously over the years. Typewriters, computers, the Internet: the world is changing at an incredible pace but for us, it is important to have solid anchors, otherwise we would always be at the mercy of changes. I believe that we have to find the profound Franciscan identity every day: the life of the Friars Minor is to live the Holy Gospel and for this, we try to learn about it and study it in depth because we are trying to put it into practice with the grace of the Holy Spirit. The world is changing at an incredibly fast pace and will continue to change, this is why our identity has to be constantly and solidly reasserted.

When you entered the Order would you ever have expected to follow this path?
- I had asked my Provincial to be a worker priest, but he did not respect my wishes and I obeyed his plan. I arrived in Jerusalem at the Flagellation to stay for six months and I’ve been here for 47 years. Every day the will of God tells us something, we have to be careful and obey God’s Providence because he is the master of the story. There is always the Pantocrator on the dome in oriental churches: it is he who commands, we have to do his will with the gift of the Spirit.
I firmly believe that something is happening, even from the enormous suffering widespread in the world, especially in the most sensitive areas which are very close to us. Every day, we cry out "Maranatha, come, Lord Jesus!" and we live, waiting and hoping for this return because without God we are incapable of solving the problems of humanity. This period of my life is full of waiting and hope, which is always the last to die. 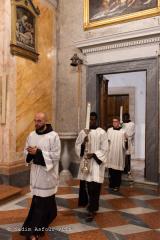 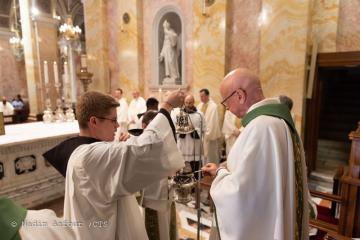 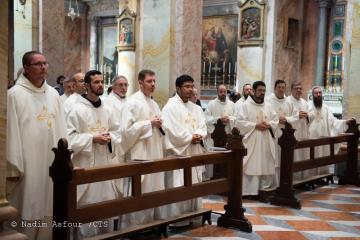 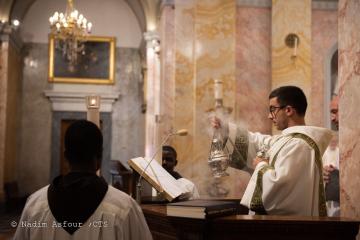 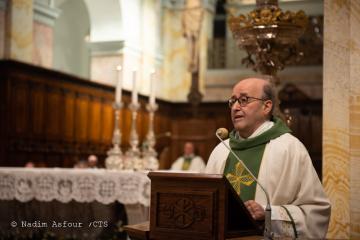 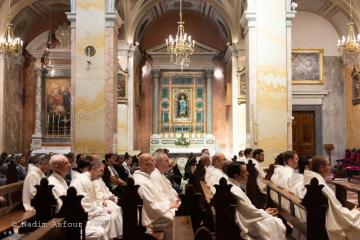 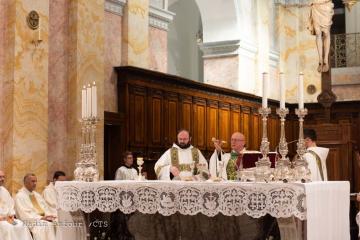 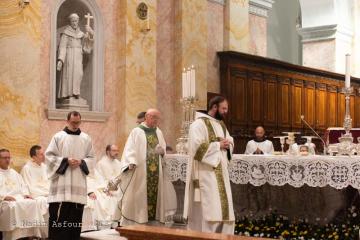 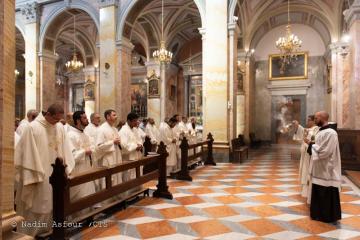 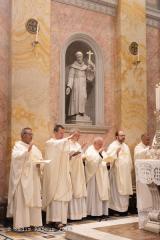 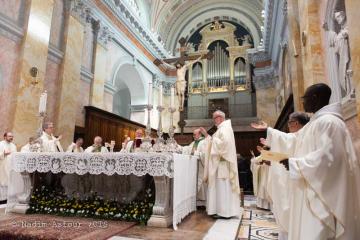 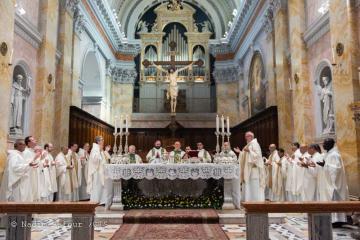 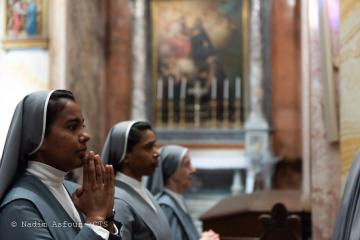 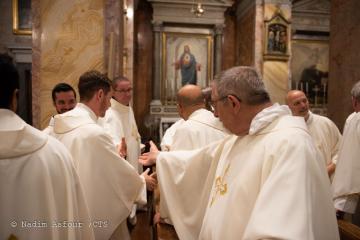 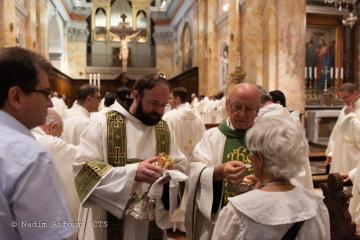 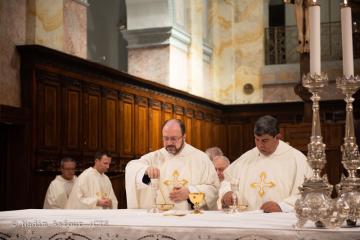 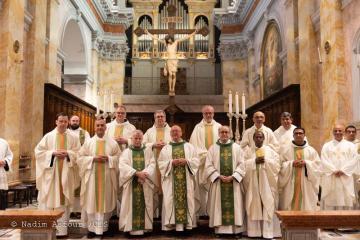 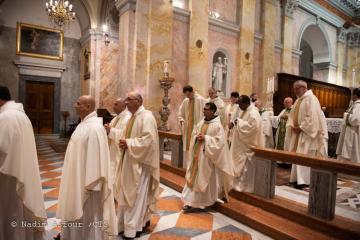 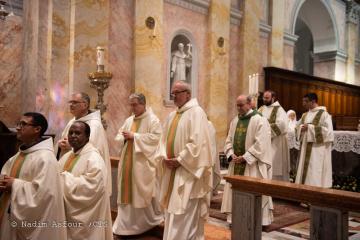