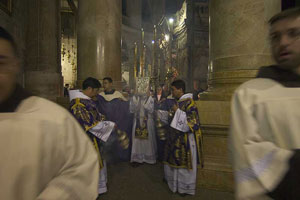 These are the words of the antiphon which is sung together with the three canticles during the Vigil celebrations of the Sundays of Lent. The canticles are a dialogue between God, as a merciful Father, and his people, who are sinners. They herald the coming celebration of the memorial of the Resurrection.

This verse from the last canticle is a prayer which the Franciscans, together with the faithful and pilgrims who take part in the Vigil celebrations in Jerusalem, offer to God in the same place of the Resurrection, while they intercede for all troubled humanity, in its quest for reconciliation. “Why, then, should you forget us, abandon us so long a time?” (Lam 5,20). This plea of suffering humanity was also the plea of Our Lord in Gethsemani and on Calvary: “Abba, Father, all things are possible to you. Take this cup away from me, but not what I will but what you will.” (Mk 14,36). “My God, my God, why have you forsaken me?” (Mk 15,34).

The answer to this prayer is given to us in the celebration which commemorates the power of God the Father, who has raised His Son from death. The angel announces His living presence: “The angel of the Lord came down from heaven, and proceeded to remove the stone from the entrance of the tomb, and sat down upon it, Halleluia”.

These words are sang as an antiphon at the moment when the whole assembly follows the celebrant, who carries the Book of the Gospels in procession around the empty tomb of the Lord, to the notes of the pipe organ and the fumes of incense. The edicule of the Tomb is illuminated by the lamps which burn night and day as a witness to the joyful event of the Resurrection.

After having venerated the tomb with the repeated singing of this antiphon, the Father Custos goes into the edicule of the Anástasis, places the Book of the Gospels on the empty tomb and incenses the book and the altar, which is, in fact, the tomb itself. Then he remains for some moments of intense prayer and contemplation, while outside the whole assembly continues to sing without ceasing the antiphon of the Resurrection and the joyous Halleluia. Even though the Church suppresses the Halleluia from its liturgy during Lent, in the Basilica of the Resurrection we celebrated Easter all the year round, and therefore the Halleluia is sung.