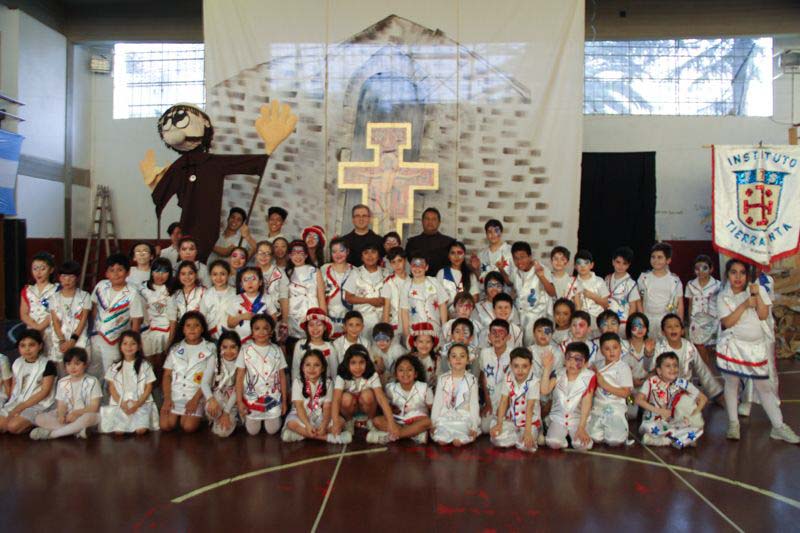 The Custody of the Holy Land also comes to Buenos Aires. In the Argentinian city, there is a school belonging to the Custody called the Insituto Tierra Santa. “We have 800 students in the whole school, [going from] pre-K, elementary and secondary school,” explained Br. Rafael Sube Jiménez, the school’s legal representative. Ninety percent are Christians and the others belonging to other religious groups are Chinese.”
The children of the Instituto Tierra Santa begin their schooling there when they are three years old and they graduate when they are 17 or 18 years old. The school is mainly run by lay people.

“There is a strong link with the Holy Land,” continued Br. Rafael. “For eight years, we have begun to make the Custody of the Holy Land known to students, teachers and parents. We are also beginning to take them to the Holy Land through pilgrimages. All of this has been happening since 2009, the year I got here.” It took the Franciscan friar some time to learn about the Buenos Aires school, so as to then begin to lead activities to make the Holy Land alive and better known.

“We started working on [teaching about] St. Francis and the love for the Custody of the Holy Land,” said Br. Rafael. “But the difference between our own and the other schools of the Custody is that we have Christians enrolled primarily. This allows us to carry out different activities ".

Children and young people are thus accompanied on a catechetical journey that goes on year by year, through a symbolic gesture. Those who are at a beginner’s level have a first encounter with the image of St. Francis of Assisi and the Church, through age-appropriate celebrations, with prayers and songs for children. When we move to the elementary level, after a series of catechetical lessons, we give them the gift of the Our Father, the figure of Mary, the Word, First Communion, the missionary Rosary, the Tau and the sacrament of Confirmation. Then, missionary projects are carried out in the Franciscan style in different environments. Once the students reach middle and high school, they become young Franciscan leaders, who have the task of being in solidarity with the communities in need. All levels have an encounter with the Custody of the Holy Land through the visits by the General Directors of the schools of the Custody.

The youth of Buenos Aires are very excited to visit the Land of Jesus, and the Custody of the Holy Land can be an instrument to call everyone— even those who are far away—to the places of faith.