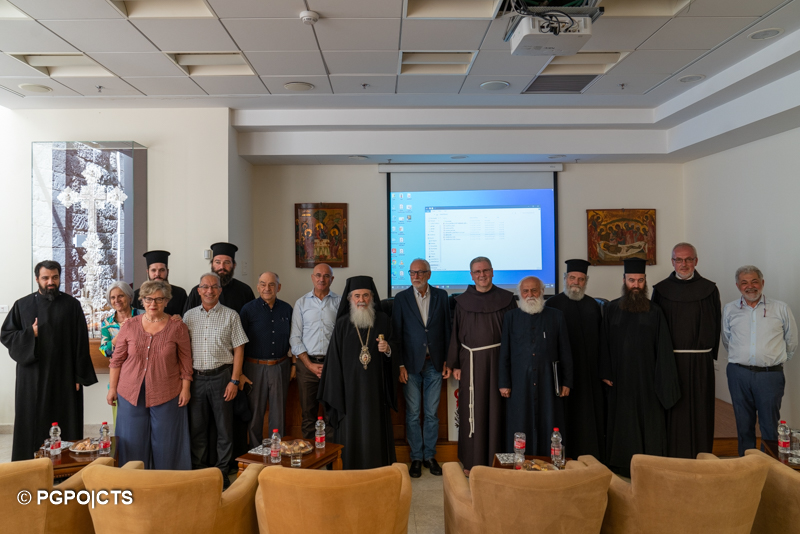 At St. Savior's Convent in Jerusalem, leaders of the churches that promoted the restoration of the flooring of the Basilica of the Holy Sepulcher met for a presentation on the progress of the work.

Patriarch Theophilos III spoke about a very important project for welcoming pilgrims, and the challenge each step represents. Father Samuel, representative of the Armenian Patriarch emphasized the challenges, but also the possibilities for collaboration between the communities.

A project with great archaeological and historical importance:

ROBERTO ZECCHIN
Manens-Tifs
"Even though it is a church, there is a huge amount of pipes, cables, drains in the underground, which over time have overlapped, degraded and need a total makeover. This was a unique opportunity to carry this out."

PAOLO SETTE
Manens-Tifs
"This is a premise for what could and can be done in the future. A lot of things can be done if there is agreement between communities. This is the essential premise for doing it."

Work on the restoration of the floor in the Basilica of the Holy Sepulcher officially began last March 14 and is proceeding in stages.

Br DOBROMIR JASZTAL, ofm
Project manager
"The project of the restoration of the floor of the Holy Sepulcher, is not only sensitive or delicate, but it is very complex. It depends on different aspects of the situation of the floor itself and on different stages that the restoration itself entails. The first stage involved the archaeological excavation project which is continuing. The second stage is the restoration of the floor stones, the historical stones and the replacement of the missing ones with new stones, compatible with the existing floor, which will be restored. The stage we presented today is very important because it includes the infrastructure that will be installed under the floor and finally, it will allow us to prepare the execution of the paving."

FRANCESCA ROMANA STASOLLA
La Sapienza University of Rome archaeologist
"We are moving forward in sectors: right now we are tackling the excavation of part of the Rotunda and part of the north aisle, so in the triporticus of the Constantinian complex. The important thing is that we are working in synergy with fellow restorers, with colleagues who are doing the installations and we are doing the archaeological excavations. We work in close cooperation because this is one big project where things are moving forward together."

Br FRANCESCO PATTON, ofm
Custos of the Holy Land
"We are well underway. We are agreeing on the part of the work that needs to be done under the floor, the infrastructure, which will then also be for the benefit of the pilgrims from the three communities. This is functional for the reception of the pilgrims who, once the restoration work is finished, will be able to enter a much more welcoming environment, I would say also much more aesthetically beautiful and at the same time also much more functional for themselves."

Br DOBROMIR JASZTAL, ofm
Project manager
"I think the same project opens for all of us different possibilities to offer all pilgrims and visitors better possibilities and solutions to welcome them and create the due atmosphere of prayer and personal reflection."

A long work to preserve and give greater dignity to the holy place par excellence and create better conditions to welcome pilgrims. This is the invitation of the Custos of the Holy Land:

Br FRANCESCO PATTON, ofm
Custos of the Holy Land
"The invitation is to come with confidence, not to be afraid even if they hear some strange news now and then. The Holy Land is safe and above all it is safe for the pilgrims who have faith in God as the source of their security."