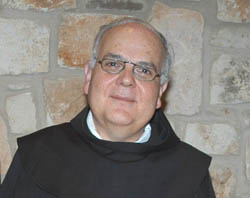 Pope Benedict XVI has recently appointed Father David Maria Jaeger ofm Prelate Auditor of the Court of the Roman Rota, the Vatican’s highest appellate court. Father Jaeger, who belongs to the Custody of the Holy Land since 1981, was ordained a priest in 1986. He took up his new role on Friday June 3, 2011, but the appointment had previously been announced by the Press Office of the Holy See early last May.

This appointment represents an important recognition of an intellectual high-profile figure, who at the same time is a witness of a personal and intense journey of faith.

Born in 1955, in Tel Aviv, Israel into a family of the Jewish bourgeoisie, David Jaeger was educated in the city’s Zionist religious schools. In his later youth he converted to Catholicism and entered into his religious vocation. For several years he held important positions in the Holy Land, including Director of the study program on Christianity at the Ecumenical Institute of Theological Research at Tantur (Jerusalem) and Secretary for the Ecumenical and Inter-Religious Liaison of the United Christian Council in Israel (UCCI) After obtaining his a PhD in Canon Law, he was a professor at the Studium Biblicum Franciscanum in Jerusalem (1986-1992).

Father Jaeger has always been sensitive and attentive to the problems of the Holy Land and the development both institutionally and diplomatically of ecumenism and Jewish-Christian dialogue. He is well known on an international level since 1992, for his role as a member of and juridical expert for the Delegation of the Holy See to the Bilateral Permanent Working Commission between the Holy See and the State of Israel. In this capacity he provided an essential contribution to the progress of diplomatic relations between the Vatican and Israel and the negotiations that led to the signing of agreements between the two States in 1993.

The news of Father Jaeger’s appointment to the Roman Rota is a ‘source of joy and pride for the whole of the Franciscan community’ and, in particular, for the Custody of the Holy Land, for whom he has enthusiastically worked for a long time, even as Delegate of the Custody in Rome. He has always kept a bond of deep affection with the Custody. The Jewish Israeli world also dedicated an article in Haaretz to Father Jaeger on the day his new appointment became effective. The article sympathetically recounts his path and his difficult choices, underlining the human delicacy and the excellent cultural gifts of a man who has been able to testify to and render fertile, in the highest institutional and ecclesiastical circles, the richness of his spiritual synthesis between Jewish roots and Christian sensitivity.