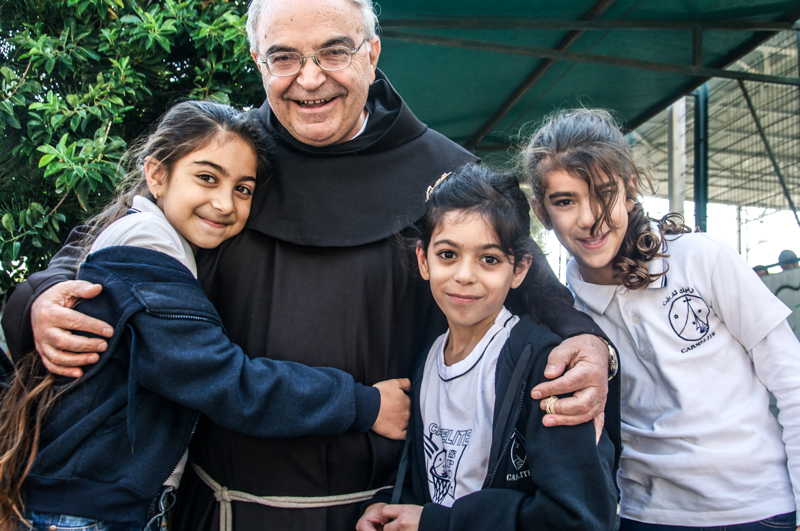 As part of our series on the schools of the Custody, we make our way to Haifa. This is the most recent of the Custody’s schools, since it began to manage the school again in September 2014.

Its name has remained“the Italian school of the Carmelites,” yet this school in Haifa is now managed by a Franciscan friar.

In Haifa, in northern Israel, a few kilometers from the Stella Maris Monastery, one can find “the Italian school of the Carmelites.” To get there from the monastery, one must go down street that is located on the slopes of Mount Carmel. This is the same street that the local Christians go up during the pilgrimage of the Virgin in July.

A young woman waits with other students at the opening of the school doors. “Are you a student?” the students ask with aplayful smile asthey anxiously wait for her to answer. “No,” she replies in laughingly, “No, I am a teacher, the visual arts teacher.” Once the gate opens,the visitor sees an open hallway. It separates the high school, to the left, from the middle school, to the right. The security guard, speaks to us in Hebrew with a Russian accent and a jovial voice, and he points ustoward where to find the Italian Franciscan friar Arturo Vasaturo, the new general supervisor of the school. (1)

In the early twentieth century, three Carmelite Sisters disembarked on the port of Haifa and settled in a residential area that is not far from the coast. They taught girls sewing and embroidery, and later, music and languages as well. For well over a century, the school grewprogressively: they built and bought the adjacent buildings. The house that became an institutiongrew without losing its familial charm.

The sisters know the students who attend the institution individually, as well as their families, who have been attending the institution for generations. Sister Maria Esther Bsharat is a Nazareth-born Carmelite, who has taught catechism and Italian since 2007. “We are going toward higher things in this school,” said the sister, using a typical Arabic metaphor for excellence, and the results prove it. “But the most important thing is to maintain and nurture the students’ spiritual life in accordance with their Muslim, Druze and Jewish friends.”

Giselle Abu Ayoub and Raghida Dahoud, the principals of the high school and middle school, along withBr. Arturo, recognize the uniqueness of the school and its valuable potential. It is a school with a large Christian majority. We put as much emphasis on scientific training as we do on human values. The school’s quality education and the values that it embodies have been attractingArabic-speaking people of other faiths for generations. “Education,”explainedBr. Arturo,“is intended to educate and instruct, not just instruct. “The school also has a nursery, a ‘seminarium,’ and conditions in Haifa are ideal: it is a delightful and peaceful city and the school is small and family-oriented.”

The change inmanagement took place, with great esteem for the sisters’ legacy and with a warm welcome for the friars. Mrs. Abu Ayoub, who spent 37 years in this school as a student andthen as a teacher, is now the principal of the high school, and she feels at home in this school. “We knew that Terra Santa, the schools of the Custody of the Holy Land, were excellent but we did not know anything else. Since July, every passing day is comforting to us.”

The Italian school of the Carmelites follows the Israeli educational system and prepares students for the country’s reality, just as the schools of the Custody do. However, it offers Italian language courses for students who wish to take them. The school, therefore, teaches Arabic, Hebrew, English and Italian. Mrs. Dahoud, the principal of the middle school, wants her students tobe find fulfillmentwithin the context of a true Christian spirit. She stresses the importance of student support, but also teacher support, so that both can give themselves entirely. Working on new activities, students will be confronted with new perspectives, as well as new sensibilities and backgrounds, and so they will walk toward new intellectual, linguistic and cultural horizons. “My mission,” added Dahoud, “is to convey to students, through my work, the message that was given to us by Christ, the love of giving and especially the love of neighbor.”

Br. Arturo stresses the importance of maturity in Christian faith and values, and he highlights the importance of human formation: “We are here for the people of Haifa, at the service of Christians and of all people. We want to accompany generations of lay Christians and we are responsible for their socio-economic future so they can make a life for themselves and stay here.” The friar emphasized the sense of urgency and clear path that needs to be taken by Christian schools in Israel. “Do not waste your time because in order to survive hereyou must be the best in all areas.”

Haifa is famous for its peacefulness, its religious tolerance, and its apolitical nature. The secret to this peace may be due to its proximity to the sea or more specifically to the diversity that comes from immigration from within the Jewish population. Whatever the reason may be, the Italian school of the Carmelites takes full advantage of this privilege to build a safe and promising future for local Christians and for future generations.

1. To learn more about the school, click here:
http://carmelite.edu-haifa.org.il/

1. For information about the school of the Custody’s change in management:
(EN) Franciscan presence in Haifa for the start of the school year in September
http://www.custodia.org/default.asp?id=779&id_n=27597&Pagina=7

Acre: the caravanserai that became a school

Nazareth on the way to citizenship while respecting its own identity

Terra Santa School in Jaffa: Arab students at the heart of Israeli society

Ramla, an isolated Christian community that is open to the world