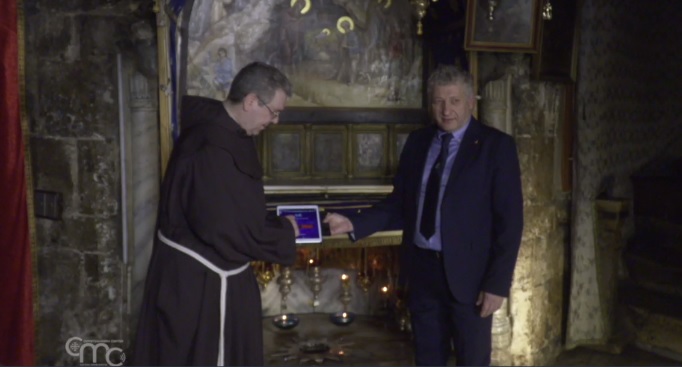 On the occasion of the 800th anniversary of the pilgrimage of peace of St. Francis in the Holy Land, Brother Francesco Patton, Custos of the Holy Land, pressed from a tablet, directly from the Grotto of the Nativity in Bethlehem, the button that lit the largest Christmas tree in the world in the city of Gubbio, in Umbria - Italy.

Br FRANCESCO PATTON, ofm
Custos of the Holy Land
"Technology allows you to do things that were once impossible: laying an electric cable from here to Gubbio would have been difficult. Instead, through the Internet today you can actually light up a Christmas tree even on the moon, I dare say."

Technology is essential. Even the Italian astronaut Paolo Nespoli, who was on the International Space Station, in 2017, had lit the tree that had been dedicated that year to the European Space Agency (ESA) and the Italian Space Agency (ASI) for their commitment in science and technology.

The Christmas tree of Gubbio is made every year on the slopes of Mount Ingino. It consists of more than 700 light sources, it's 750 meters high and covers an area of 130 thousand square meters. And because of its gigantic size, in 1991, it entered the Guinness Book of Records as the largest Christmas tree in the world.

In addition to the Custos of the Holy Land, in the Grotto, there were also the Italian Vice Consul in Jerusalem, Federico Dimonopoli, the Deputy Mayor of Gubbio Alessia Tasso, the Head of the Culture Office Matteo Morelli, Fr. Fausto Pafili Rector of the Basilica of Sant'Ubaldo and the Vice President Francesco Ragnacci of the Albearioli Committee, and the Councillor Roberto Prudore.

And while the power button was pressed from Bethlehem, there was a big party at the same time in Piazza Quaranta Martiri.
On the stage, there were the president of the association of the tree Giacomo Fumati, the mayor of Gubbio, Filippo Mario Stirati, the president of the Region, Donatella Tesei, the delegation of Palestine, the mayor of Bethlehem, Tony Salman, the representative of the Palestinian Authority Abu Mazen, the Minister of Foreign Affairs, Ryad Al Malki, and Father Ibrahim Faltas, director of the Terra Sancta Schools and member of the government of the Franciscan Custody.

Br FRANCESCO PATTON, ofm
Custos of the Holy Land
"The meaning is linked to the fact that the nativity scene and the Christmas tree are two complementary symbols that both help us to understand the meaning of Christmas. The nativity helps us to understand the humility of the son of God who is incarnated. The tree is a symbol of life and it stands for Jesus who comes to life. We will see this more clearly at Easter when we will see Jesus on the tree of life which is the tree of the cross."

The city of Gubbio is known throughout the world thanks to the famous episode in which St. Francis tames the fierce wolf.

Br FRANCESCO PATTON, ofm
Custos of the Holy Land
"Gubbio is remembered as the city where St. Francis meets the wolf, tames it and becomes his brother; this year we celebrated the eighth centenary of the pilgrimage of St. Francis to the Holy Land, a pilgrimage in which he goes to meet the Sultan in Damietta. Once again he goes to who was considered an enemy and becomes his brother. And it seems to me that Gubbio and the Holy Land in this 2019 somehow narrate the same symbol; that is, the fact that it is not true that we must become a wolf for others but rather that we must learn to become brothers. Even the wolf can become our brother, and so can the man of other culture, religion or nationality."

In the end, there was a big round of applause for this beautiful peace initiative from Bethlehem, the city where it is always Christmas, from Gubbio and all over the world. A dream of peace as St. Francis wanted. And St. Francis was remembered in this eighth centenary of his pilgrimage of peace to the Holy Land.