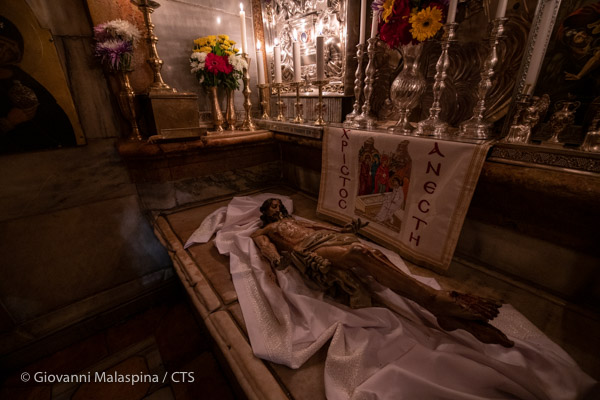 Good Friday was the day of reflection on the passion of Jesus, in the places where it happened. In spite of the particular circumstances of this year, due to the restrictions imposed by the health emergency, from the morning, the prayers of the Franciscan community of the Holy Sepulchre rose to God from Calvary, the place of Jesus’ crucifixion, in the name of the whole Church. The ceremony, presided by the Apostolic Administrator of the Latin Patriarchate, Mons. Pierbattista Pizzaballa, took place in three parts: liturgy of the word, adoration of the cross and the communion of the Eucharist.

In front of the Rock of the Golgotha, in which Christ’s cross was fixed, the Apostolic Administrator displayed the reliquary of the Cross for a moment of adoration. The rite dates back to the 4th century, when the people would file by on Good Friday, on exactly this spot, adoring the Cross, while for three hours parts of the Holy Scripture on the Lord’s Passion were proclaimed. The celebration ended with the distribution of the Eucharist consecrated the day before.

The path of Jesus towards Calvary was also followed again in the late morning with the traditional Via Crucis along the Via Dolorosa, led by the Custos of the Holy Land, Fr. Francesco Patton, accompanied by three friars of the Custody along a deserted and heavily guarded  Via Dolorosa, in the presence of only the police force and journalists. This itinerant prayer, which starts from the Franciscan convent of the Flagellation, is repeated every Friday and usually that of Good Friday is the one with the greatest participation, especially of pilgrims who arrive in Jerusalem for the Holy Week from all over the world. In this period of health emergency, the empty streets of the Old City were the setting for the prayer, with the songs and prayers of the four Franciscans present. This moment of prayer and reflection on the Passion of Jesus reached its climax on Calvary, the physical site of the Crucifixion of Jesus, and in the Edicule of the Holy Sepulchre, which preserves the memory of the Resurrection of the Lord.

In the evening, the funeral procession of Christ took place, presided by the Custos of the Holy Land, Fr. Francesco Patton. Come chronicles speak of this tradition as being present as early as the 15th century, but the current form dates back to 250 years ago, according to a Holy Land ceremonial dated to 1760 which relates the funeral procession as we celebrate it today. It is a rite which goes back over the moments of the passion, the death and the burial of Jesus. The last stages are the most moving. On Calvary, two deacons remove from the crucifix the crown of thorns and the nails that had been driven into his hands and feet. Then the body of Christ, laid out on a sheet, is taken to the Stone of Unction, where the Custos of te Holy Land carries out the burial rites described by the Gospels. The Custos anoints the image of the Crucifix with myrrh and perfumes it with aromatic herbs and incense, as Joseph of Arimathea and Nicodemus did with Jesus. 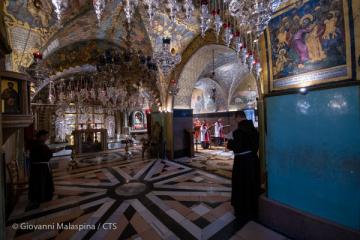 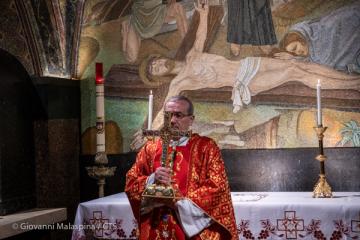 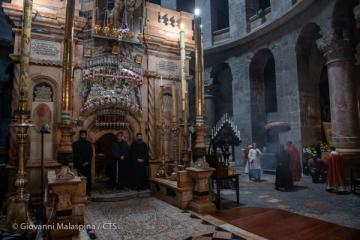 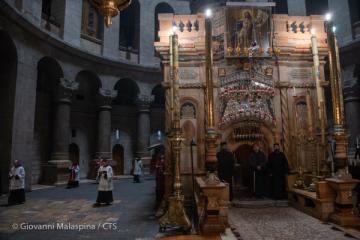 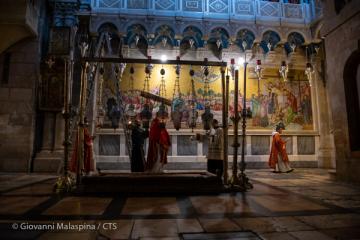 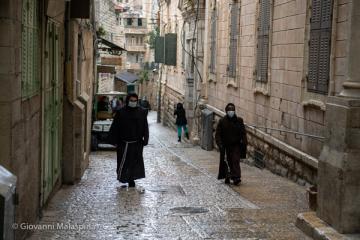 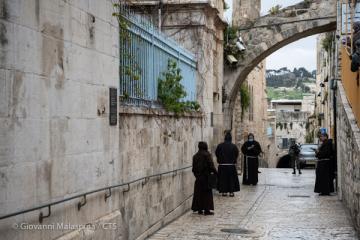 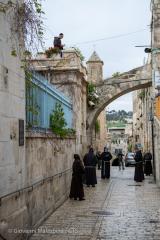 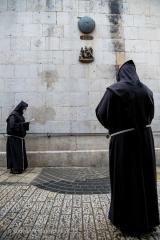