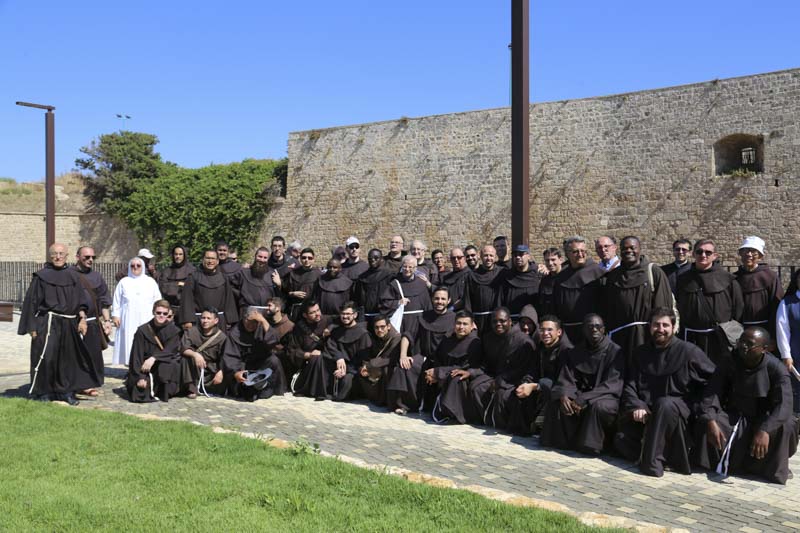 Acre shines with sunlight and joy on the day of the opening of the eighth centennial since the beginning of the Franciscan presence in the Holy Land. To celebrate this important anniversary, the friars of the Custody chose to leave right from the place where the first Franciscans arrived in 1217. About seventy friars from Jerusalem and Galilee attended the celebration day on June 11, reserved for religious of the Custody.
Fr. Marcelo Cichinelli, guardian of Saint Savior’s Monastery in Jerusalem, said, “We have chosen this way to kick off the festivities so as to favor contemplation for the friars who intimately come together.”

THE MASS
Mass kicked off the day at the church of St. John of Acre in the beautiful old town overlooking the sea.
“On this Sunday dedicated to the solemnity of the Holy Trinity, we come to Acre to celebrate the beginning of our presence in the Holy Land, where eight centuries ago the first friars minor landed and began the Franciscan presence in the Holy Land, of which we are heirs today.” The Custos of the Holy Land, Fr. Francesco Patton, said during the homily, in which he emphasized the meaning of the Trinity. “Even our own mission here in the Holy Land is rooted in this Trinitarian love experience,” said the Custos. In fact, in his the Letter to the Order, St. Francis reminded us of the meaning of our vocation and that God wants evangelizers and missionaries: “For this I am sending you into the whole world, so that you may bear witness to his voice with the word and so that with your works you can make it known to everyone that there is no one else who is Almighty except Him (FF 216).”

THE VOW RENEWAL
During mass, the friars renewed their vows together as symbolic gestures. The Superior of Acre, Fr. Simon Pietro Herro, spoke at the end of the celebration: “Today is like a Franciscan Pentecost: we are here all together in the place where the first friars arrived. Today, with the renewal of our ‘yes’ to the Lord, we can begin again, with strength, humility, love and energy, because today’s world needs true Franciscan witnesses.” The atmosphere of great joy on the occasion of this significant anniversary of the fraternity was infectious, even for the youngest present. Fr. Andrea, still a seminarian said, “The renewing of vows once a year and doing it on important occasions such as this, helps us be in the right mindset about our choice [to be friars].”

DISCOVERING ACRE
Fr. Quirico, the former Superior of Acre, then led everyone in the discovery of the crypt underneath the Church by saying, “In 1995, I arrived in Acre and in 1996 I entered the church for the first time here through a window underneath the church. I found that there were some areas that were full of debris, and so we had to remove twelve containers. We started the work.” Several years later, Roman columns, several cisterns and other rooms were found, possibly constructed to reinforce the structure.

After lunch, the large group of friars traveled to the town of Acre, accompanied by Fr. Eugenio Alliata, the archaeologist for the Custody. Fr. Alliata showed an old map of the old town on which the place of the first monastery was marked, which has now been replaced by a school. Walking on the same steps that their own brothers walked on 800 years earlier, the friars of the Custody of the Holy Land were able to retrace their history.
“Witness accounts tell us about the arrival in Acre in 1217 by Fr. Elia da Cortona,” said Fr. Narcyz Klimas, custodial deputy archivist and chairman of the 800-year celebration committee. Fr. Elijah came as a provincial for the new Overseas Province, created after the Pentecost Chapter of the same year, which opened the Order to the universal missionary dimension. “Today we saw the possible place of the first monastery, which was probably built in 1239,” said Fr. Narcyz. In the first years of their presence, the friars perhaps stopped in the trading posts of the great houses of the rich lords, who offered them their hospitality.”

THE CONCERT
The children of the Terra Santa School in Acre attended the event, with a concert organized in the big hall of the Custody’s school. Among choir chants and instrumental pieces, the theme chosen was that of peace, which the Middle East always needs, a topic that is very much emphasized at this school where children and teachers of different religions and cultures coexist.

After the concert, at the end of the special day of celebration, the bus waited for the friars so that it could depart. Each one went back to his own life and to his own mission. “For 800 years the friars have been in the Holy Land and they have faced all of the problems of these centuries,” said Fr. Narcyz before leaving. So, today we can celebrate their coming here, their battle to stay in the holy places as well as their victory.”