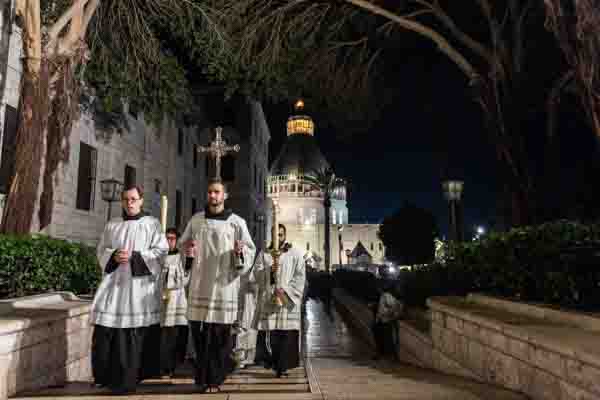 On Facebook, the posts in the past month reached over two million people, on Instagram almost three hundred thousand, while the contents posted on Twitter were seen almost two hundred thousand times.

Thanks to the work of the Christian Media Center, the special prayer by Mons. Pierbattista Pizzaballa from the shrine of Dominus Flevit on  Palm Sunday, the Easter Vigil of Easter Saturday and the Mass on Easter Day from the Holy Sepulchre were  streamed live,  as were the Holy Hour on Holy Thursday from Gethsemane, the Via Crucis and the recording of the Funeral of Jesus on Good Friday from the Sepulchre. These celebrations were presided by the Custos of the Holy Land, Fr. Francesco Patton. His message of solidarity  and the  Easter message were also streamed online in various languages.

Hundreds of messages arrived on the Facebook page of the Custody of the Holy Land from Italy, the United States, France, Croatia, Hungary, Spain, Mexico, Vietnam, Korea, China, Poland and many other countries. The faithful looked at what was happening in the Holy Land with devotion and in many cases asked the Franciscans for a prayer for themselves and for the whole world. The intentions they wanted to give to the friars of the Custody include situations of personal and family life and also support for Corona virus patients.

The Franciscan friars of the Custody of the Holy Land have always been dedicated to praying for the whole of humanity from the Holy Places in the name of the Church. The friars entrust to the Lord in the Holy Sepulchre in Jerusalem all the requests that they receive every day from pilgrims and local Christians.

In this difficult period, the rosary that is recited every Saturday during the candle-lit procession in the Basilica of the Annunciation in Nazareth will be offered for the intentions of all those who write to the Custody of the Holy Land and the friars. The appointment can be followed in streaming at 8.30 p.m. local time (GMT +3) every Saturday on the site of the Christian Media Center. The invitation is to gather in prayer to ask God for the strength to deal with this time of hardship with faith.