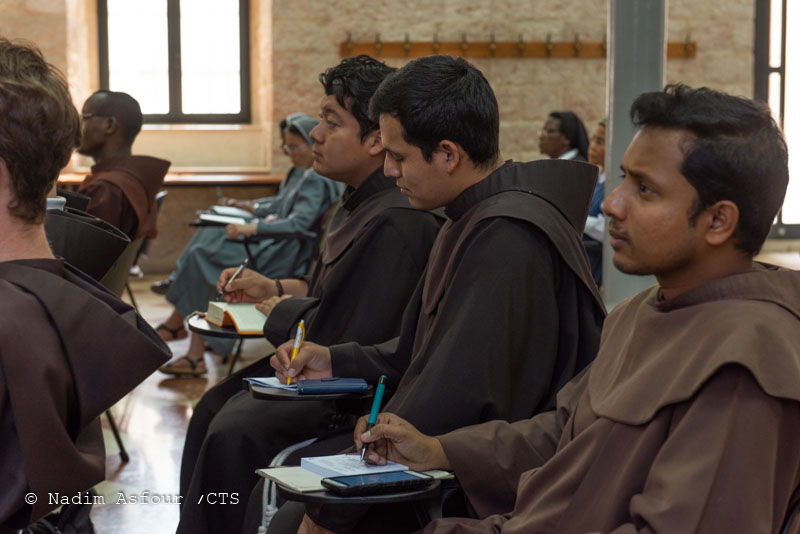 From September 10-15, the St. Savior’s Monastery hosted the first cycle of Ongoing Formation for the friars of the Custody and for the Franciscan family of the Holy Land.

“The Franciscan Week is an integral part of the ongoing formation of the friars of the Custody,” said Br. Marcelo Ariel Cichinelli, guardian of St. Savior’s Monastery who is also responsible for ongoing formation. “Among the activities planned by the Formation Council we have decided to offer the friars a three-year cycle of Franciscan formation.”

This year was dedicated to reflection and to introducing the writings of St. Francis led by Br. Cesare Vaiani, the General Secretary for Formation and Studies of the Order of Friars Minor, and Br. Marco Guida, Professor of Franciscan Hagiography and Philology at the Pontifical Antonianum University in Rome, two experts of the writings of the Franciscan world.

The main objective of the week was to meditate on the content of St. Francis’ writings and to rediscover the Franciscan charism. For this very reason, many participated in this first cycle, which was exceptionally addressed to the friars in initial formation and to the friars of the Monastery of the Flagellation in Jerusalem.

As explained by Br. Marco Guida, “the journey began by examining Francis’ ability and culture, as well as his and writings and those of Friar Leone.” The examination of the writings of St. Francis as well as that by Friar Leone, who kept the autographed pieces and who added notes that attest to their authenticity.

Subsequently, the focus has shifted to the method in which the Franciscan texts were passed down starting with code 338 - the first handwritten piece containing the very first part of Francis’ writings, and which is now kept in the library of the Sacred Monastery in Assisi.

A fundamental part of the formation was the explanation of the evolution from the first form (the Non-Bull Rule written in 1221, ed.), to the Bull on the Rule of 1223, to the Testament which is the last text that Francis wrote. “We ended our study with some examples of letters and prayers written by Francis,” concluded Br. Marco.

"The intellectual dimension of Franciscan life is of great importance only if it is placed at the service of something else,” said Br. Cesare Vaiani. “In his writings, St. Francis warns against those who “possess words” in order to become more powerful, richer, to impose their power on others through their culture,” he continued. In the Franciscan view, said Br. Vaiani, “the only desirable form of knowledge is that which leads [the friars] to return what they have learned to God and to the friars, welcoming what they receive as a gift. “

These were intense days for the participants, who were able to transform everything they learned on an intellectual level into spiritual motivation.
The will meet again next year, at the second edition of the Franciscan Week which will focus on the biographies of St. Francis.