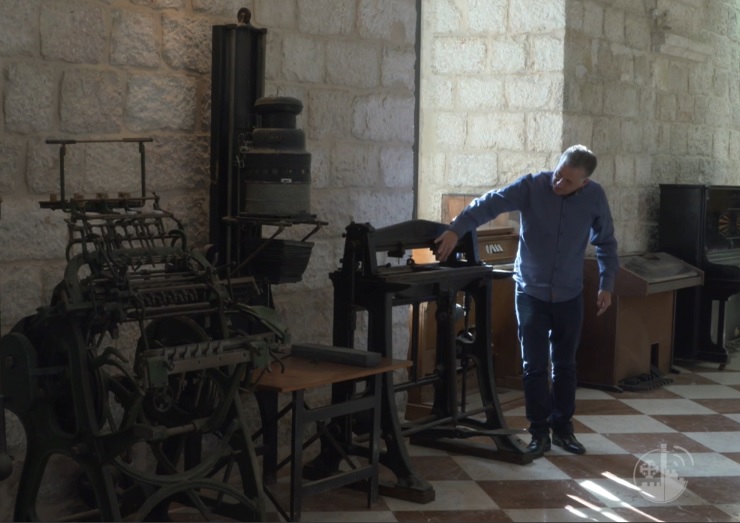 Br Sebastian Frotscher arrived in Jerusalem in 1847 with the necessary equipment to set up a Franciscan printroom, still known as "Franciscan Printing Press".

The story begins halfway along the 19th century and still continues. This is the story of the printing press of the Custos of the Holy Land. It was once called the Franciscan print room and today the Franciscan Printing Press. It is the bearer of a long and great tradition in the church of Saint Saviour and in its current main headquarters at the foot of the Mount of Olives in Betphage.

Br STEPHANE MILOVITCH, ofm
Person in Charge of Cultural Heritage of the Custos of the Holy Land
“The Franciscan Printing Press in the Holy Land was created in 1848 during the Ottoman Empire because the brothers needed their own print room in order to circulate books in a context which was not Christian. It was not easy to print books at that time but today the printing press gathers the wealth of over 150 years of printed materials.”

At the beginning attention was focused on the typesetting of letters in various weights in order to print the Holy Bible in different languages as well as books and articles relating to the Christian teachings. The first book ever printed in Arabic and Italian is a catechism dating back to 1847.


Br STEPHANE MILOVITCH, ofm
Person in Charge of Cultural Heritage of the Custos of the Holy Land
“Our first books were books of grammar or catechesis for the local people. The Custos works for local Christians who live in the shade of the shrines and the pilgrims coming here. We have always printed out of a duty of apostolate for the local Christians and also to spread our message to the many pilgrims.”

The hall of the Immaculate Mother of God within the convent of Saint Saviour still includes four manual presses using heritage techniques. The first punctures cardboard sheets and cuts the sides. The second sets the types; the third allows books to be sewn and the fourth to be bound.

The Custos of the Holy Land has made great efforts to remain in step with the times. For example, more modern machines able to manage digital printing were purchased. This process is carried out by a local specialised team.

JACK ROFA
Director of the Franciscan Printing Press
"Printing is continually developing. In all stages of this process we now have the most up-to-date machines available. They give us the option to print anything we require on paper, that is brochures, booklets or books. At the same time we still have machines which are 60 to 70 years old and still function well. In the room devoted to the restoration of ancient books we also have press machines which are one hundred years old but still in good condition and therefore in use”.

The Franciscan printing press is currently part of the ETS publishing brand and it is at the service not only of the community of brothers for liturgical booklets in a range of languages but also for the local community. The process and results are able to marry up beauty and care for tradition with innovation and modernity.