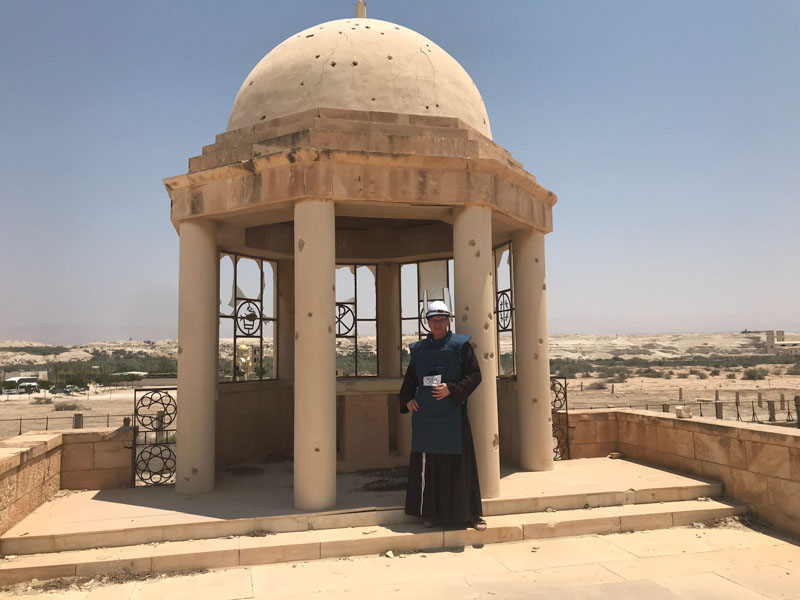 The Franciscan monastery on the Jordan River was closed in a hurry in 1968. A few days ago, during the work carried out to clear the area, a Franciscan friar of the Custody of the Holy Land entered it again for the first time. He did so at the request of the Halo Trust association, which for a long time has been involved in removing mines on the western bank of the river, where the episode of the Baptism of Jesus took place.
Since 1967, as a result of the war between Israel and Jordan, the entire area was closed to pilgrims and tourists, and became a huge minefield (55 hectares) and a military zone. It wasn’t until the year 2000, for Pope John Paul II’s visit to the Holy Land, that a small access was opened. Then, in 2011 the Israeli authorities cleaned up a small part of the land so as to make it accessible to the pilgrims.

Since January 2018, Halo Trust has gradually de-mined all of the territories belonging to eight Christian churches: Catholic, Greek Orthodox, Armenian, Coptic, Ethiopian, Romanian, Syriac and Russian.
On July 9, it was the turn of the Franciscans, who represent the Catholic Church. We proceeded to clear the main road to the church, as well as the area around and inside the church. No suspicious material was found in the church or the monastery, but Halo Trust operators did request the removal of all objects.

“On July 16, I entered the monastery,” said Br. Sergey Loktionov. “We found things that belonged to the friars: sacred vestments, liturgical furnishings, chandeliers, books, portable altars. It seems that the friars left in a hurry, because even the register of the pilgrims’ masses had been left on the table of the refectory with the pencil inside.” The last recorded mass took place on January 7, 1968, and was celebrated by a group from Nigeria. “Even in the kitchen we found some everyday objects: a pot, kettles, cutlery, drinks,” continued Br. Sergey. A series of portable altars, used by pilgrims to celebrate mass near the river, were taken out of the monastery. The Franciscan reports that by next Epiphany, during which we usually we go to the Jordan River to celebrate the Lord’s baptism, the churches should once again be in possession of their respective territories.

According to historical records, the Franciscans have been making their yearly pilgrimage to this site since at least 1641. In 1932, the Custody of the Holy Land purchased that land, where it built the church, which was then blessed in 1956.