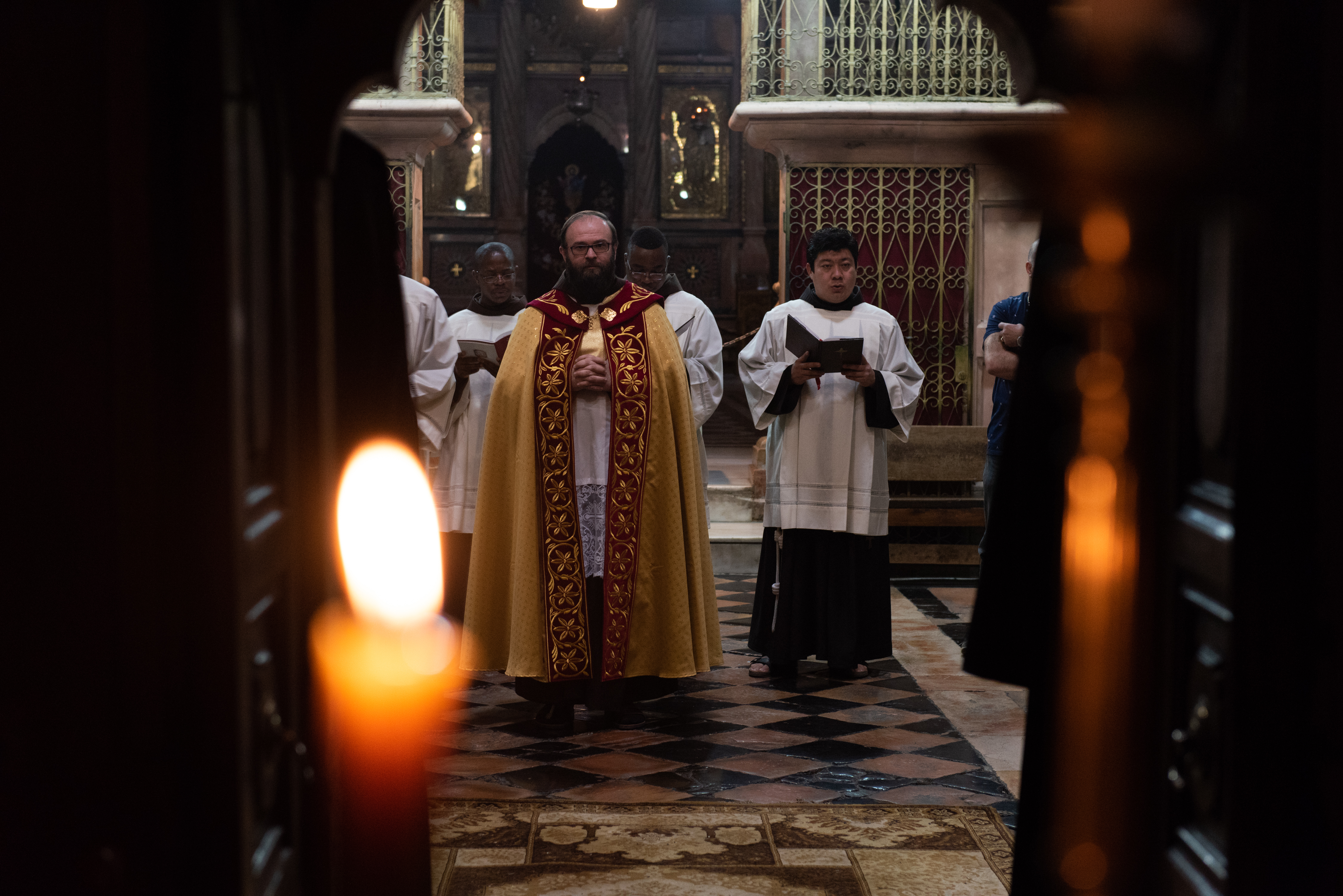 Born in Croatia in 1981, Fr. Sinisa Srebrenović had a happy childhood in a village near Zagreb. At 14, he started out on his vocational path at the Franciscan Minor seminar, thanks to the testimony of the life of the friars of the Order who led his home parish.
Step by step, his footsteps took him to the Holy Land and the Custody, where he has been Discrete for the German, French and Greek-Slav linguistic group since 2016, as well as the first sacristan at the Basilica of the Holy Sepulchre.

Let’s talk about your vocational choice: what made you enter the convent?
I don’t like to identify the vocation with a precise time. The vocation, as well as being a personal thing, is nothing special. Let me correct myself, it can be something that is not special: I believe that it is like a seed that is planted, it has its times and its ways of growing but, if it is not looked after, it will never bear any fruit. The vocation, like conversion, takes place at a precise time in our lives but if you are not attentive to that moment and you do not experience the conversion than it is pointless, and the call is unanswered.
My decision came from my home parish, which is Franciscan. Gradually this idea of becoming a Franciscan matured in me and I looked after it to understand whether it was a deep desire or only a passing passion.

Was there something particular in Franciscanism that impressed you and made you enter the convent?
To tell you the truth, at the beginning I did not even know who St Francis was. I knew St Anthony well because my parish is named after him and everyone was very devoted to him. In the church, the statue of St Francis was in a slightly out-of-the-way position: it was at the end of the church and once a year we said a prayer there, which I was able to identify only later as the Transitus, i.e. the commemoration of the death of St Francis on 3rd October.
More than the intellectual aspect -  which came when I was studying – I was fascinated by the testimony of a life that I received from the Franciscans of my parish, and this is what made me appreciate the life of the friars compared to other lives.

When you finished the path of formation, you arrived in the Holy Land: how did this happen?
I asked to come to the Holy Land but today, I still haven’t understood why. I felt that I had to come here even though I had never been here.I am aware that it was something crazy that neither my parents nor my Franciscan family understood straight away.
I came because of a need. A desire, I did not come because I felt uncomfortable in Croatia with the friars of my Franciscan Province. Also because, from my experience, the friars are the same all over the world, with the same limits and the same riches.
I arrived in 2006 and I could not speak Italian, the common language in the Custody. For this reason, the first thing I did was to spend a month in Rome at the Delegation of the Holy Land; I understood nothing of the Mass, nothing of the prayers and I could not converse. There I realized that international environments are really difficult and not only that, I convinced myself that a cultural opening was necessary to be able to carry on.
After that period, I had my first destination: the Basilica of the Annunciation. I discovered what the Holy Land is in Nazareth: a world within the world. In Nazareth, I formed a very strong bond with the place and with the mission, strengthening my decision to remain in the Holy Land, in such a different environment. Nazareth was a continuous discovery: the place, the local Christians, the pilgrims. Pieces of a large and complex mosaic which, when they were all put together, formed the image of my Holy Land.
In that period, I didn’t know that I would have lived there for eleven years and I did not know that I would form a sentimental bond with that place, so much so that leaving it and changing was very difficult.

After Nazareth, you became sacristan at the Holy Sepulchre. Let’s talk about your duties: what is your “typical day”?
There are three sacristans at the Holy Sepulchre and for us, the pace of life is slightly different with respect to the friars of the community we live with. There is no typical day, we get up – following shifts – at 3.30 in the morning to be in Church and start to prepare what is needed for the opening of the Basilica and the preparation for the various celebrations of the Eucharist that take place every half-hour at the Tomb and at Calvary, after the end of the Armenian liturgy. The day is always the same because of the fixed times, laid down by the Status Quo, but it is also always different because anything can happen on any one day.

What is the busiest time for you?
Definitely Easter and Lent. You only have to think that we have two holy weeks; the Catholic and the Orthodox ones. A sacristan always has to be present, as the Status Quo says, during all the celebrations. The greatest difficulty is the impossibility of being able to get organized for the liturgies. Working in shared spaces, we cannot – for example – prepare things in advance. It is, therefore, necessary to know well what to do and be able to manage the times quickly in the short moments of respite between the different celebrations. The liturgies at the Holy Sepulchre are very rich and beautiful, but very challenging for us, the sacristans.

Is there any duty that is more “particular” or “strange”?
It’s hard to mention one duty, in particular, What amazes me at times is the total lack of logic. It may seem absurd, as it may seem strange that there is a rule that defines which candles have to be lit or put out, but that’s how it is. There are internal rules which, to those who do not experience them at first-hand, may seem strange. For example, wondering why a table is placed near the altar of Mary Magdalene from Ash Wednesday until the feast day of Mary Magdalene in July, or why a ladder is placed behind the Stone of Unction more or less at the same period.
Despite all this, I can say that here I feel that I am experiencing real ecumenism: sharing the same altar where we celebrate the Eucharist every day, without complaining, is not something trivial. Here nobody doubts the truthfulness of the place and everybody has the desire and the interest to celebrate in the same place as a priest of another Christian denomination. Because here the physical place offers an extra stimulus to celebrating life together, with all the difficulties that that entails.

After Nazareth, the Holy Sepulchre. What does this place mean for you?
I will be able to answer that question only when I have left it. For the time being, I am convinced that it is teaching me to understand even more where I am. Watching people from all over the world, people who come for once in their lifetime, people who bring here their fatigue and their problems, people who have been dreaming for years to come here: when I meet all these people, I really realize where I am and I cannot stop reminding myself that I am also really here.
The Holy Sepulchre, from my point of view, is a microcosm where beauty and difficulty can be discovered, it is a concentrate of emotions because everything is summed up here. I think that what happens here in our poor human answer to the absurdity of the Resurrection which this place testifies: everything is concentrated here, so calling it the center of the world is not wrong. I wondered many times about the reason for this place and some internal dynamics between the various communities, and the only motivation that I found lies in the absurdity of this gesture of love.
Here there is so much beauty: the beauty of being together, of getting to know others, of seeing Greek Orthodox, Armenians, Copts, Syrians and Ethiopians jostling one another because they want to be closer, like in front of a fire in the middle of winter. Living here, under the same roof with so many communities, managing the same space is a little like living in a block of apartments where you share the kitchen but everyone had their own pots and pans and everyone has to use the same cooker... It is not simple, but this is the Sepulchre, and those who have been here will understand: the absurdity of chaos, but of regulated chaos.

Tag: Franciscans of the Holy Land,  ,